Last month we made a trip to Mount Rinjani which is an active volcano and one of the highest peaks in Indonesia, located on the beautiful island of Lombok. The trip was booked through Pac-West, a Singapore-based adventure travel agent who we have found to be reliable in the past.  Their local agent on Lombok, Lombok Network, made all the arrangements and supplied the guides, porters, camping equipment and food. They did a great job and our guide Mr. Soon, and his team brought us safely to the summit and back.

The trek took 3days and we spent two nights camping at sites around 2,600m on the crater rim which provided magnificent views of Mount Rinjani (3726m) and, far below, of the huge crater lake known as Segara Anak Lake. Rising out of the lakewaters was the smouldering cone of the volcano itself emitting a constant cloud of grey steam and ash and, from time to time, rumbled angrily.

The trek went as follows:

– Day 1. We entered the Gunung Rinjani National Park via the Rinjani Trek Centre near the village of Senaru about 2 hours drive from the main tourist area of Senggigi Beach. We hiked uphill for about 5 hours through rain forest before emerging above the tree line (and above the clouds) for another 2 hours walk across grassy terrain. Arriving on the lip of the crater about 5pm we enjoyed the fantastic view of Rinjani while the porters set up camp and prepared dinner.

– Day 2. A down and up day. We descended the steep slope from the crater rim down to the lake. We heard that the previous week an Italian tourist had fallen to her death on this stretch. At the lakeside, the brave took a dip in the icily cool and clear water followed by a soak in some hot spring pools nearby. After lunch we climbed to our second campsite on the crater rim at a location closer to the base of Mount Rinjani. The route was  steep and tiring. Another early night to prepare for final push to the summit.
– Day 3. Up at 2:30 am and wrapped up in our warmest clothes, we strapped on our headlamps and began our climb up Rinjani in high spirits. Unfortunately it was very windy, bitterly cold and damp as we rose into the clouds. Our guide admitted that this was the coldest he had ever been and he had climbed Rinjani more than 100 times. The final 1000 meters was basically a huge steep sided pile of volcanic ash meaning that for every step forward we would slip back a half step. It was completely exhausting and we all agreed later that it was physically the hardest thing we had ever done. We eventually reached the summit around dawn but the cloud was so thick we could see nothing and given the piercing wind and cold we were all eager to turn around and head back to camp. Coming down was fast, very fast. I slipped and slid my way down, falling over a number of times. It was almost impossible to stop. Fortunately we all managed to steer away from the sheer drops along the edge of the path. Reaching camp in time for breakfast we then packed up and began the long 7 hour trek back to civilisation via the Sembalan Lawang exit. 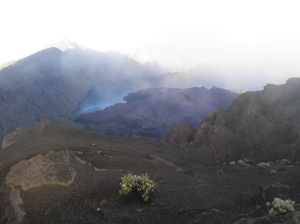 The clouds started to clear on the way down.

A word about the porters.  Our party of 6 were looked after by 2 guides and 5 porters who carried all the camping and cooking equipment and food in baskets hanging from stout bamboo poles. The porters wore flip flops on their feet as they galloped up and down the mountains. Their stamina and agility was impressive and their cooking skills were good too. They turned out dishes like gado-gado, banana pancakes, fried rice and noodles. They certainly earned their tips of 150,000 rupiah each (about USD15).