I have just returned from a holiday in the Philippines. On this visit I thought I would try to do a walking tour of the heritage sites in downtown Manila.

Manila was once a rich and beautiful city – dubbed the ‘pearl of the orient’ it was the jewel in Spain’s Pacific empire. Spain’s 330 years as colonial rulers came to an end and America took over for the 40 years running up to World War Two. Under US rule Manila was expanded and modernized while still retaining much of the city’s character and charm. During its heyday in the 1930s, sprawling mansions along the coconut-palm-lined Dewey Boulevard (now Roxas Boulevard) enjoyed a splendid view of Manila Bay, while in the cobbled streets of the historic quarters of Intramuros and Quiapo, picturesque horse-drawn calesas were starting to give way to auto-calesas and traffic jams were making their first appearance.

Sadly though, by the end of World War Two the heart the city was reduced to heaps of smouldering rubble. US General Douglas MacArthur has to take much of the blame. A man of monumental ego, he was humiliated by Japan’s swift and successful invasion of the Philippines in the months following Pearl Harbor. On his forced evacuation from the Philippines in March 1942 he made his famous ‘I shall return’ vow and, unfortunately for the city of Manila, he did. 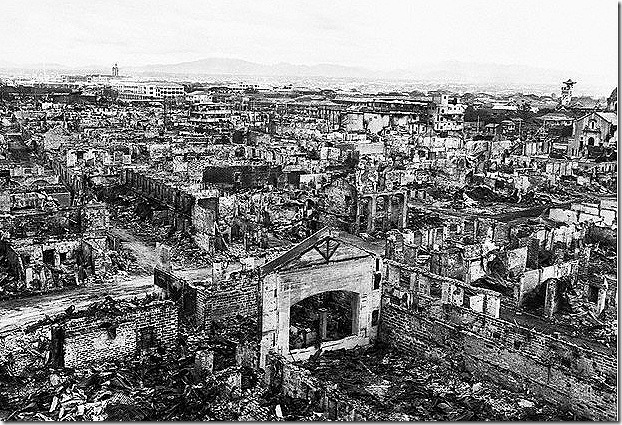 The battle to liberate Manila lasted a month in early 1945. In an understandable effort to minimize US casualties, MacArthur blasted the  city from close quarters with artillery and anything else he could throw at it. The Japanese were finally crushed but a staggering 100,000 innocent Filipinos were also killed during the battle. Perhaps I am being a bit harsh on MacArthur. Of course the real baddies were the wartime Japanese whose barbarous occupation needed to be ended but I cannot help thinking that if Manila had been an American city, full of American civilians, that a smarter way of liberating the city would have been devised. After all Hong Kong, Singapore, Jakarta and Rangoon were all surrendered to the allies by the Japanese more or less intact. Why not Manila?

Anyway that is water long since under the bridge. The Philippines has had 65 years since the war to restore and rebuild its capital. I would have to say that the results have been somewhat patchy. Ten out of ten for increasing Manila’s size – its population is now well over 20 million making it one of the world’s largest metropolises, but when it comes to urban design … well let’s just say that Manila is not the prettiest city in Asia.

With this background in mind I set out to see if any heritage buildings have survived or have been restored to their original grandeur.

First stop was the Santa Cruz Church near Carriedo LRT station. This building was built in 1957 in hispano-baroque style and the church tower is a reasonable copy of the earlier version which was destroyed in the war. 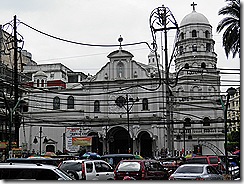 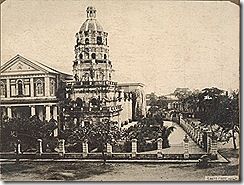 I should point out here that it is virtually impossible to take any photos in this part of Manila without getting a bunch of ugly electricity cables in the way. Look at this lot: 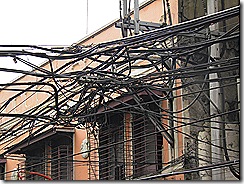 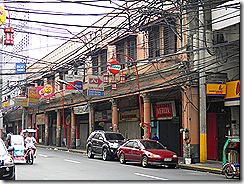 A more famous church is the nearby Minor Basilica of the Black Nazarene. The current building replaced an earlier one which burnt down in 1928. It survived the war. The Black Nazarene is a dark coloured statue of Jesus first brought to the Philippines in 1606 and said to have miraculous powers. 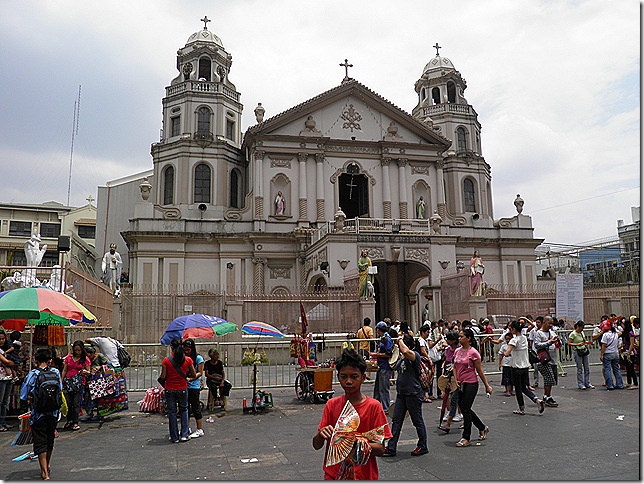 Every 9th January the statue is taken on a procession around Manila’s streets and literally millions of people crush around it in an attempt to have a handkerchief or towel brushed against the idol in the hope that its miraculous powers will bring a lottery win or a sudden cure or some other improvement to their hardship-filled lives. The number of attendees at these processions increases year by year. This year’s procession attracted  over 7 million devotees. It is only a matter of time before a horrific lethal stampede occurs. As an alternative to an annual procession, perhaps the powers-that-be should consider opening the statue to the public 365 days a year and charge a nominal entrance fee of 10 pesos per person. The money raised could then be used for good causes.

Next we walked through the streets of Binondo, Manila’s Chinatown, which was much quieter than usual as all the shops were closed for Maundy Thursday. 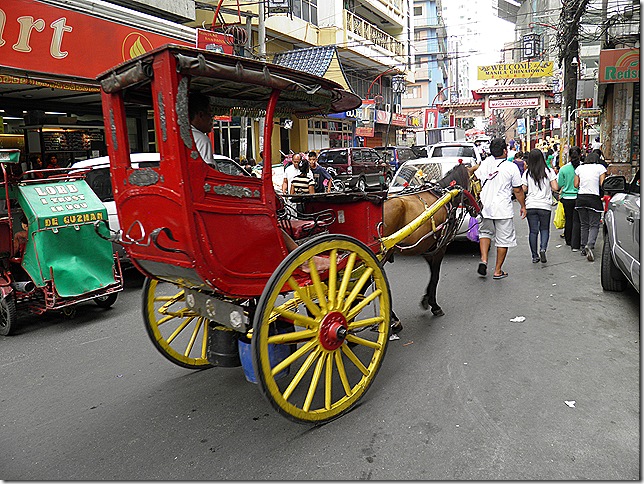 The Philippines’ substantial Chinese community has long been well assimilated and, as elsewhere in south east Asia, their population includes a disproportionate number of the country’s rich and influential.

Binondo has its own grand church, the Minor Basilica of St. Lorenzo Ruiz. The original structure, dating back to 1596, has suffered a lot over the years from earthquakes, a British bombardment in 1762 during Britain’s brief occupation of Manila (oops!) and from WWII. Only the octagonal bell tower is said to date back to the 16th century and its pagoda-like shape would have appealed to the mainly Chinese congregation. 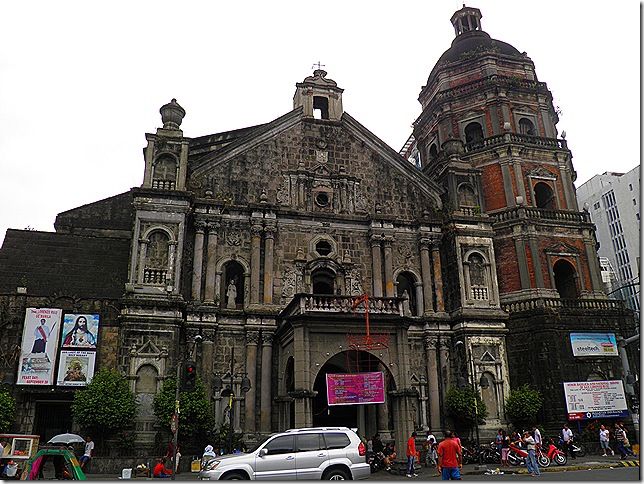 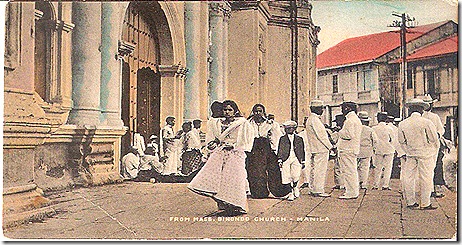 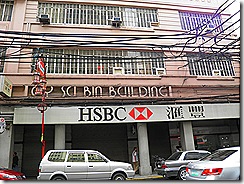 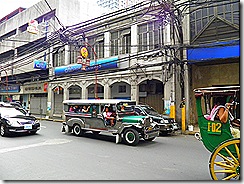 Just before Quintin Paredes street reaches the Pasig River, I passed underneath the Filipino-Chinese Friendship Arch marking the end of the Binondo district. Next to the arch is the Uy Chaco Building built in the 1920s in art-nouveau style and which has been the Binondo branch of Philtrust Bank since 1950. Apparently it is slated for demolition which is a shame as it is one of older and more distinctive buildings in the area. 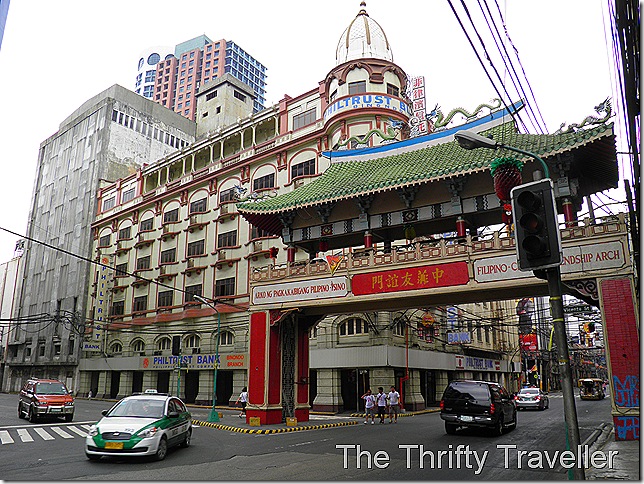 From here my walking tour of old Manila continued across Jones Bridge and into historic Intramuros.

You can view a map of my walk here.

To be continued in Part 2.

7 thoughts on “Walking Tour of Old Manila – Quiapo and Binondo”