This is a continuation of my walking tour of old Manila which took about 5 hours in total.

From Binondo we walked across Jones Bridge over the Pasig River from where there is a fine view of the imposing Post Office building. 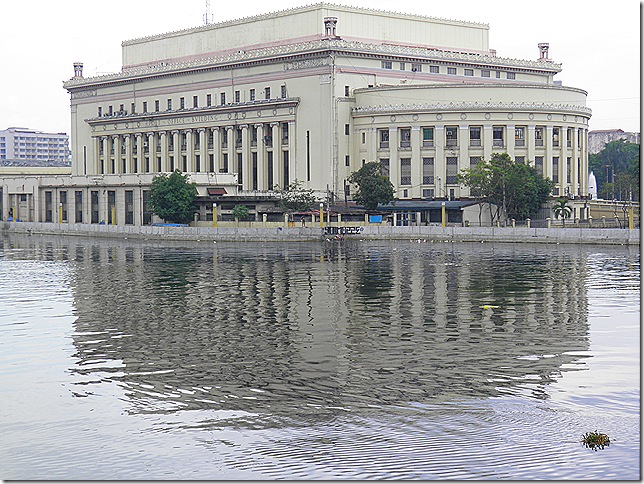 The original building dates from 1926 but it was heavily damaged during the war and had to be rebuilt in 1946. As you can see from this pre-war postcard they faithfully followed the original design. 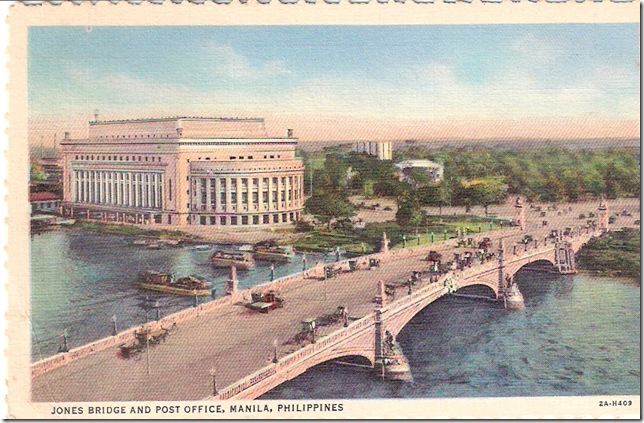 Close to the Post Office is the Manila Metropolitan Theater building. Completed in 1931, this interesting art-deco beauty only had a working life of 10 years before World War Two intervened during which the building was severely damaged. Since then it has undergone a number of renovations and half-completed restorations interspersed with long periods of disuse and decay. At one time it served as a boxing arena but it is currently abandoned again and its fate is uncertain. 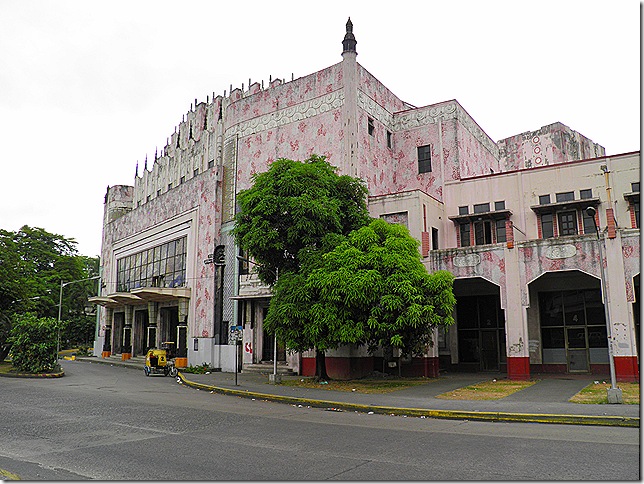 Filipino influences were incorporated into the stain glass windows and the capiz shell lamps flanking the entrance to the theater. 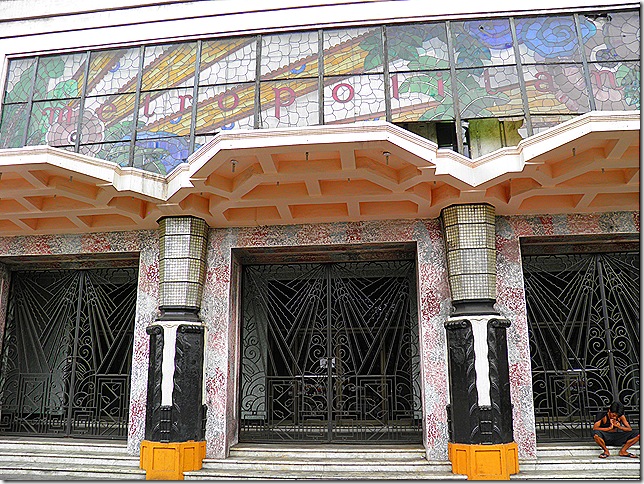 Let’s hope the building can find a new occupant to maintain and preserve it for the future (perhaps as a venue for Filipino Idol or similar).

Five minutes walk away is one of the entrances to the walled city of Intramuros where Spain built its first fortifications over 400 years ago. The quiet narrow streets within its thick stone walls contain a number of restored heritage buildings and points of historic interest. 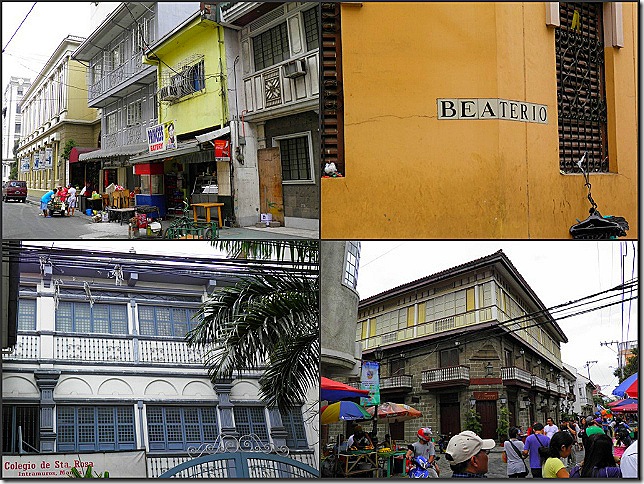 San Agustin Church (below) was one of the first stone built churches in the Philippines being completed in 1606 and renovated in 1854. Shortly afterwards, the earthquakes of 1863 and 1880 demolished the left hand bell tower which accounts for its lob-sided appearance. It was the only building left standing in Intramuros after the US liberation of Manila. For that reason alone it deserves its status as a UNESCO World Heritage site.

I have an old postcard in my collection depicting the same church. It looks in better shape today. 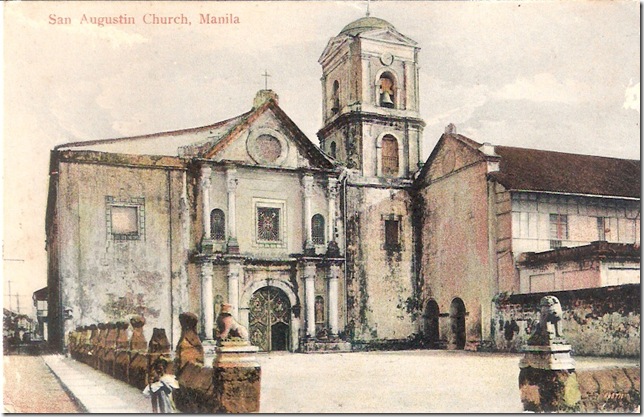 By this time on our walk it was time for refreshment and the elegant Ristorante delle Mitre, immediately facing the church, served an excellent meal. Many of the dishes are named after bishops who are said to dine there regularly. 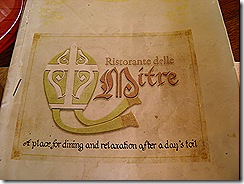 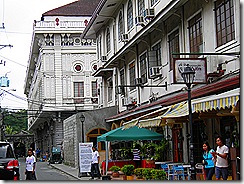 Next we passed Manila Cathedral. This building, completed in 1958, is the 6th cathedral on this site, its five predecessors having been destroyed by typhoon/fire, earthquake, earthquake again, earthquake yet again and WWII respectively. It does not seem to be a lucky site – will it survive the next earthquake? 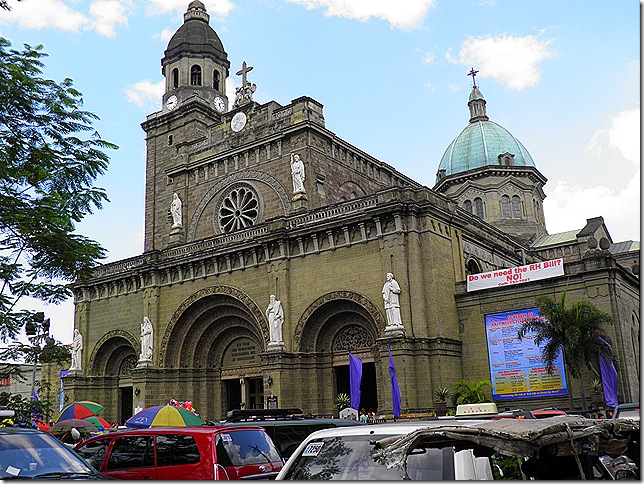 The banner on the cathedral says “Do we need the RH Bill? No!” which presumably refers to the Reproductive Health Bill. I do not know all the details but I believe this is a brave and, frankly, long-overdue effort on the part of recently installed President Aquino to stem the Philippines’ exploding population growth. Brave because any measures concerning birth control are routinely opposed by the Catholic Church which remains highly influential in the Philippines.

At the northern tip of Intramuros sits the bastion of Fort Santiago which overlooks Pasig River and once controlled all approaches to the city. It has a long and bloodthirsty history.  Until 1570 it consisted of a wooden stockade occupied by Rajah Sulaiman who ran the Muslim kingdom of Manila on behalf of his relative, the Sultan of Brunei. Then the Spanish arrived and a great deal of negotiating, skirmishing and treachery on both sides took place but the outcome was that in 1571 King Philippe of Spain ordered Adelantado Miguel Lopez de Legazpi (great name!) to colonize the country. “What shall we call the colony your Majesty?” said Legazpi. “How about naming it after me” replied King Philippe. “Jolly good idea sir.” 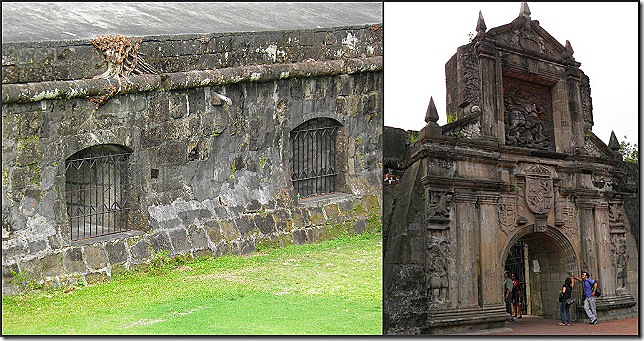 The fort was strengthened, damaged, destroyed and rebuilt numerous times over the next couple of centuries by the Spanish and even the British who occupied it for two years from 1762. It later became headquarters for the US army during their administration of the Philippines. During WWII the Japanese military committed a great number of tortures and executions in the fort’s dungeons which are now mostly closed off to the public. The Fort also contains a museum commemorating Jose Rizal, the national hero who led the country to independence from the Spanish (only to see the Americans take over). 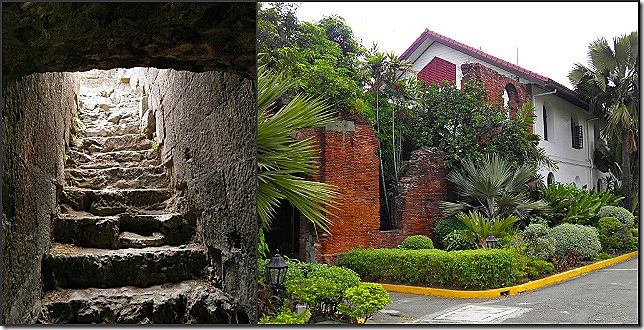 The Manila authorities have done a good job in smartening up Fort Santiago which was much cleaner than I remember from an earlier visit many years ago. There is talk of redeveloping Intramuros to improve its tourism potential and to provide quality residential housing. Provided it can be done tastefully that seems a good idea. Ayala Group has expressed an interest in the project and they would probably do a good job if selected. 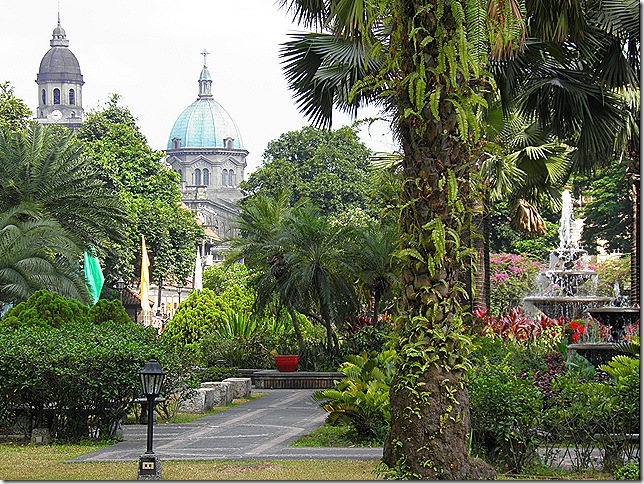 From the ramparts of Fort Santiago we had a good view of Pasig River (perhaps slightly cleaner than it used to be?) looking back over Binondo. 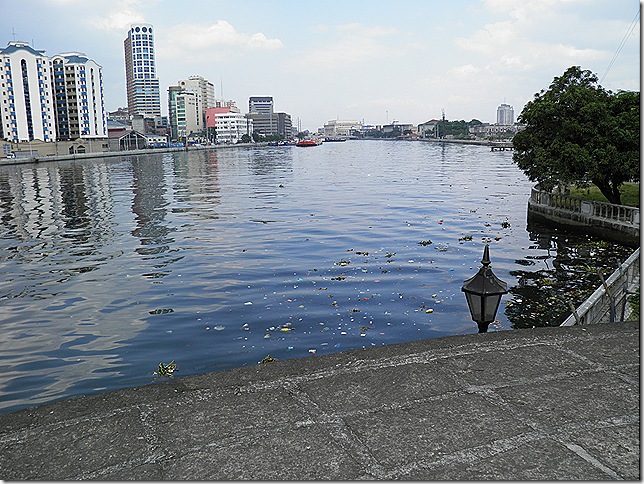 Despite the progress, slum areas remain in the Tondo district where life may not have improved much since the old postcard below was issued. 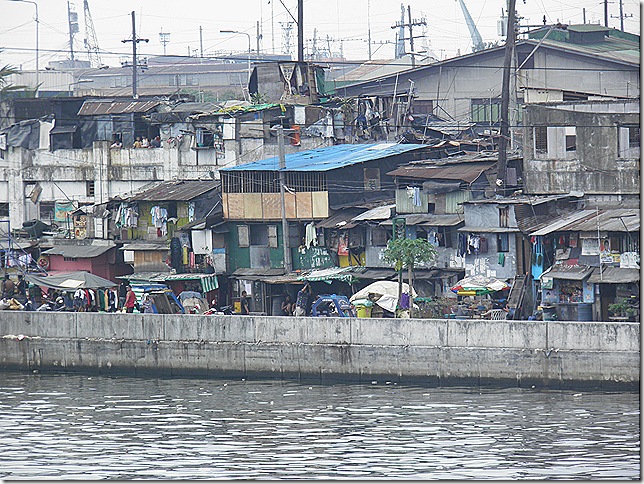 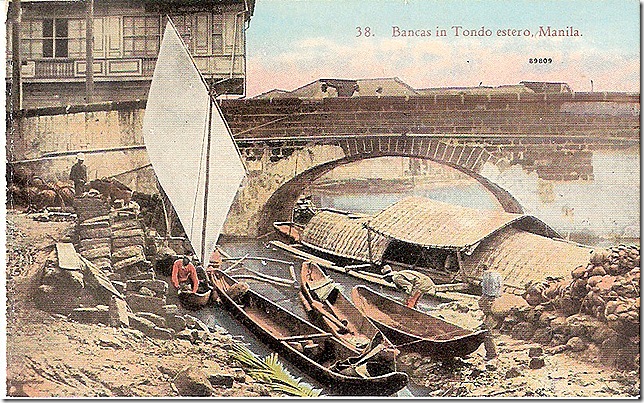 To round off the walking tour we exited Intramuros and took a quick look round the neighbouring Rizal/Luneta Park area.

The grand Manila Hotel, built in 1909, is still there and little changed from the view in this vintage postcard (except the stars and stripes no longer flies above it and nowadays there is a high rise extension). 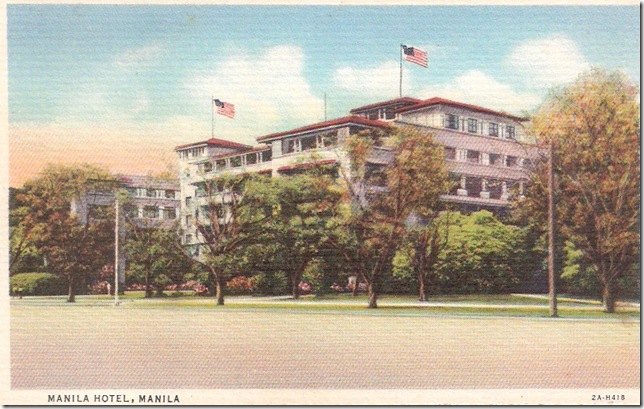 You can stay in the 3 bedroom MacArthur suite, which was the residence of General MacArthur from 1935-1941, if your pockets are deep enough.

Next to the hotel is the Quirino Grandstand, scene of  recent dramatic events when a disgruntled ex-cop hijacked a bus load of Hong Kong tourists and a number of them were killed in a bungled police rescue attempt.

Alongside  Rizal Park are two impressive looking classical buildings, The National Museum (which was closed for the holiday) and the Department of Tourism. 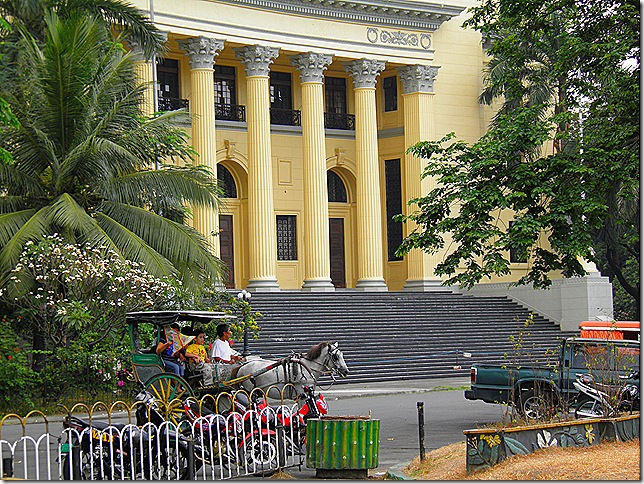 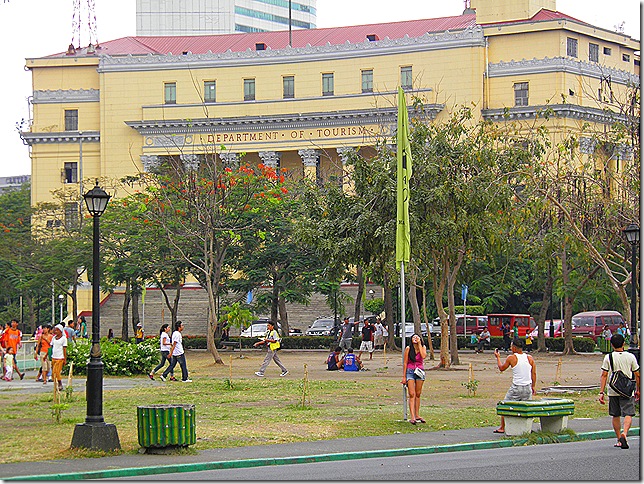 The walking tour ended here. It was an interesting day and showed a side of Manila that I had not seen before. 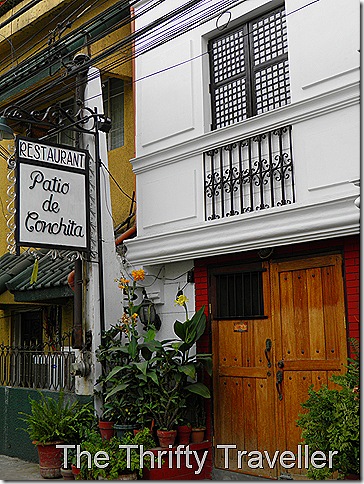