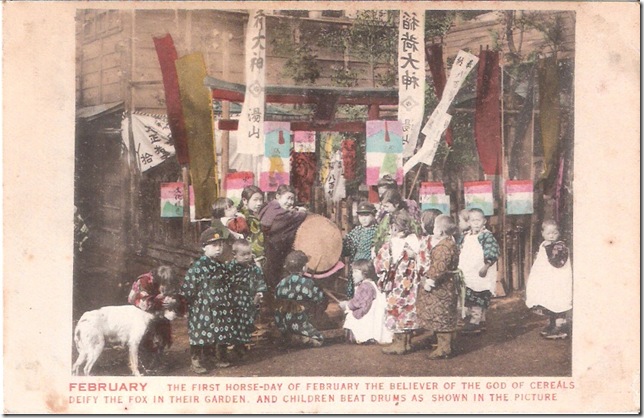 The caption on the postcard is a little confusing but refers to an event in the Shinto religion which occurs on the 6th day of the 2nd month of the lunar calendar (First Horse Day of February).

Around 32,000 of Japan’s Shinto shrines are dedicated to Inari, a mythological god and patron deity of grain, particularly rice. On the First Horse Day in the year 711 the deity is believed to have come down to the site where the Fushimi Inari shrine in Kyoto stands today.

The fox (kitsune) is said to be a messenger of the Inari deity and fox statues appear at some Shinto shrines.

The favourite food of a Japanese fox is fried tofu. (Maybe English farmers should try leaving out fried tofu at night and then foxes would not need to kill chickens.)

This is how kitsune udon, noodles in broth with fried tofu, got its name.