One of the lesser known museums is the Ottoman Bank Museum, where my son and I were almost the only visitors. This museum may not have broad appeal but I found it fascinating.

It is located on Bankalar Caddesi (Bank Street) in the Karakoy district of the city, in a grand building constructed in 1890 which served as the head office of Ottoman Bank until 1999. 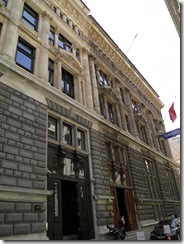 The building is now the home of SALT, an independent not-for-profit cultural institution founded by Garanti Bank, which took over the remaining operations of Ottoman Bank in 2001.

The Ottoman Bank Museum is in the basement of this fine building, in and around the bank’s former vaults and strong rooms.

Entrance to the museum is free of charge.

The Crimean War (in which the Ottoman Empire fought on the side of the British and French against the Russians) helped persuade the Ottomans of the military and economic importance of railways. Construction of a railway network became a priority but required finance from abroad. British capitalists, who were keen to be involved in the railway construction projects, found it difficult to cooperate with the government in the absence of a state bank and an effective monetary system in the Ottoman Empire.

To address this issue, Sultan Abdulmecid issued a Reform Edict in 1856 stating that:

Institutions such as banks will be established in order to correct the coinage system of My Sublime State and to give credit to its financial affairs.

Two British entrepreneurs, Stephen Sleigh and Peter Pasquali, had been planning to establish a British Bank of the Levant but they turned their attention instead to Turkey. They were instrumental in getting the Ottoman Bank off the ground.  After obtaining a Royal Charter from Queen Victoria, Ottoman Bank opened for business on 13 June 1856 with capital of £500,000.

Ottoman Bank was a private British commercial bank with modest resources and had to content itself with a handful of branches initially rather than fulfil the role of state bank which is what the Ottomans really wanted.

The Ottoman Empire saw the importance of establishing a state bank for its financial stability. A number of foreign and local groups were vying for such a concession but all were rejected in favour of the Ottoman Bank. However the Ottoman government was unwilling to hand over all the powers of a state (central) bank to an institution which was wholly in British hands and they insisted that its capital base be opened up to French investors.

On 4 February 1863, the bank, with its expanded capital provided by British and French shareholders, was elevated to the status of state bank and renamed Imperial Ottoman Bank (or more frequently Banque Impériale Ottomane since French was the lingua franca of the Eastern Mediterranean at that time and the language used in the bank’s internal operations).

With its new status, the bank took on more merchant banking activities such as financing railways and public works, including Beirut Port and the Beirut-Damascus railway line. 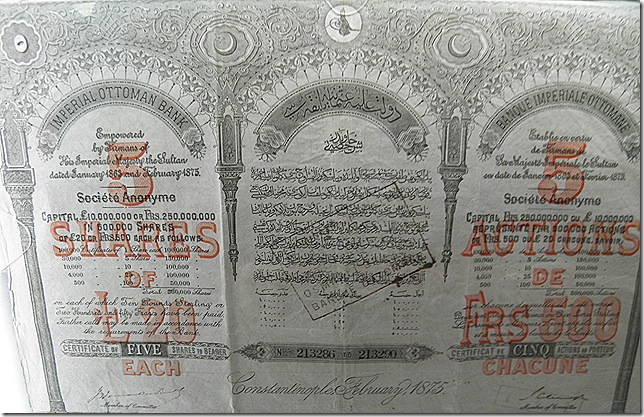 The bank moved its head office to this building in 1892. The illustration below shows how the bank’s gold reserves, amounting to 1 1/2 million liras and weighing 13 tons, were transported.

In 1896 the building was attacked by a group of armed Armenians who threatened to blow up the bank. The then governor, Sir Edgar Vincent, escaped through a skylight and alerted the authorities. The attackers eventually gave up their weapons in return for safe passage to France on Sir Edgar’s private yacht.

When the Ottomans entered WWI on the side of the Germans, the Imperial Ottoman Bank was seen as being on the enemy’s side. Its British and French management were forced to leave and the bank’s operations were crippled for the duration of the war. Even after the allied victory, things were never really the same again although the bank was allowed to continue acting as state bank until 1931 when the Central Bank was established.

The name changed back to Ottoman Bank in 1924 and from 1933 onwards it reverted to being purely a commercial bank. The bank sold most of its overseas operations in 1969 to National & Grindlays Bank. In 1996 Ottoman Bank was sold to Dogus Group and it is now part of Garanti Bank.

After reading about the history of the bank, visitors to the museum get to go inside some of the strong rooms which still have their original vault doors, safe cabinets and old ledger books. The safes were made by Chatwood’s of London, Manchester, Leeds and Bolton according to the inscription on the lock mechanism.

One safe contains a considerable number of rather soiled-looking banknotes which are folded into quarters. Ottoman Bank was a banknote issuer. 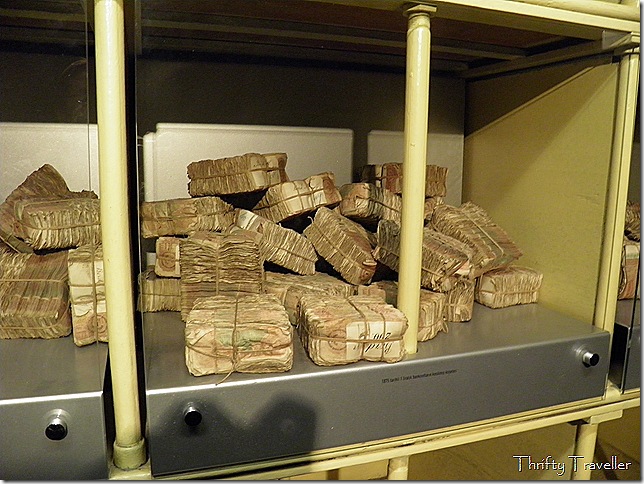 In another strong room some old staff records have been put on display including full length photographs and some ‘feuilles de personnel’. 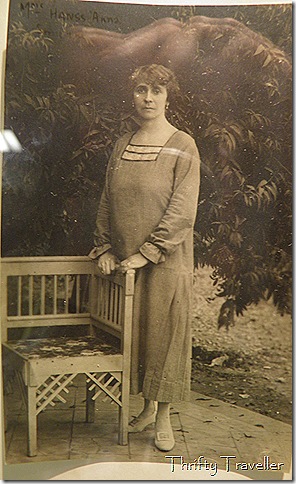 This employee’s name was Mrs. Anna Hanss, working at the Smyrne (Izmir) branch.

She was a widow.

Her nationality was stated as ‘Serbo Yougo Slave’.

A breakdown of employees by nationality and religion/ethnicity as at 1906 demonstrates the cosmopolitan nature of the Ottoman Empire which was spread over a wide area of south-east Europe and the Middle East. The bank’s recruitment policy appears to have been skewed against Muslims who made up a disproportionately small number of employees and were engaged mainly in lowly paid non-clerical jobs.

Also on display are a few examples of correspondence with customers such as this beautifully handwritten letter in copperplate style, a skill which appears to be as dead as the Ottoman Empire. (The writing may be beautiful but is not easy to read for the modern eye.) And what a nice telegraphic address that customer had – ‘Victor-Constantinople’!

Overall, a very interesting museum for an ex-banker like me though I’m not sure my son was that impressed.