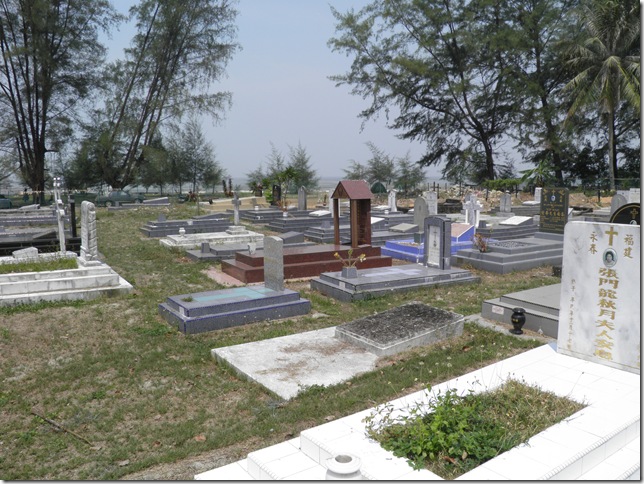 Kuantan Christian Cemetery is located next to Taman Gelora, a beach park close to the centre of Kuantan, the state capital of Pahang state.

Most of the graves here are of local Indian and Chinese Christians, together with a few westerners, including ten Federated Malay States policemen who were killed during the Malayan Emergency.

Two lonely tombstones in neighbouring plots which caught my attention belonged to planters, A.A.S. (Bill) Dobbie, who died in 1964 and Philip Noel Sansom who died in 1960. 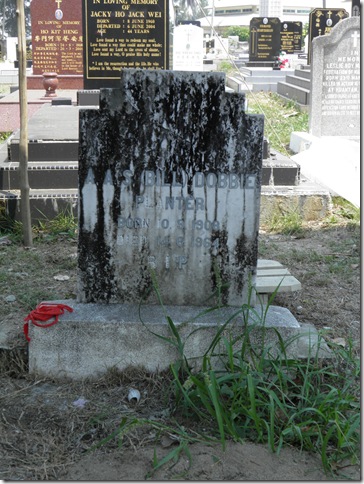 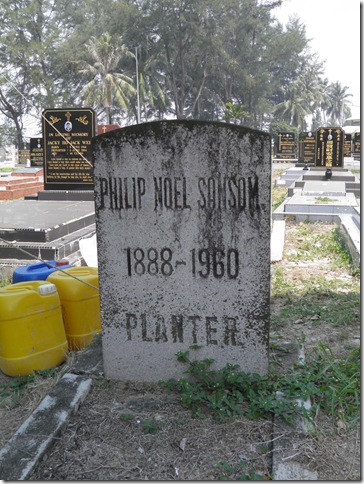 Who were these men whose only epitaphs were their occupations, without any of the ‘He will be dearly missed’ type inscriptions? I thought it would be interesting to see if I could out any information on them.

I drew a blank on the internet. They lived before the age of computers so there is no reason why their names should come up on a Google search unless they were famous for something.

Then I remembered reading a book a while back called Elephants, Tigers & Tappers in which the author, Michael Thorp, wrote about his life as a planter in the 1950’s and I recalled he was stationed somewhere near Kuantan and therefore probably knew Dobbie and Sansom. I wondered whether he mentioned them in his book.

Sure enough, he did. Here is the passage about his first encounter with them in 1957:

The Cotterills took me to the Kuantan Club where I was introduced to Bill Dobbie, a huge man with the puffy face of a boxer. He was the Manager of Jabor Valley Estate. Sitting with Bill Dobbie in the club was P.N. Sansom, an elderly retired planter who was thin and frail-looking, a man with a cough and a tin of Senior Service cigarettes always in his hand. As I discovered later, PN always wore a fresh pair of beautifully ironed khaki-coloured shorts. Because of the thinness of his legs, the shorts ballooned out at his knees. If you sat opposite him in the club, it soon became apparent that because of the heat he had dispensed with underwear. The phenomenon was what Bill Dobbie fondly referred to as an equipment review. All the men who frequented the club knew of this unintentional display and, out of respect and love for PN, they would always suggest that ladies did not occupy a seat opposite him.

That adds quite a bit of colour to our knowledge of Sansom! I guess he might have spent the War in a Japanese detention camp or been fighting somewhere overseas. By the time the War ended he would have been past the normal retirement age of 55. He presumably decided to stay on in Malaya after retirement and he managed to survive until age 72 despite being a heavy smoker with a bad chest.

Elsewhere in the book we are told that Bill Dobbie had been made a Datuk (a title similar to a knighthood) by the Sultans of both Pahang and Terengganu. He was also a JP and President of the Kuantan Club.  The Jabor Valley Estate which he managed is still going today but it has switched from rubber to palm oil. He was clearly a man of some standing locally. The book has a photo of his retirement party. It is undated but it could not have been long before his death as he was only 56 when he died.

There must be ten of thousands of ordinary colonials like Dobbie and Samson lying in graveyards across Malaysia and elsewhere in Asia. Their exploits are now largely forgotten but books like Elephants, Tigers & Tappers (and blogs like this one) help keep their memories alive far more effectively than a decaying tombstone. The book is not an enthralling read because on the whole planters led humdrum lives which revolved around their work and leisure pursuits but, against the backdrop of the exotic Orient, there was always some excitement to liven things up.