From time to time readers request me to try to locate and photograph the graves of their long departed relatives who died in Malaysia. I am happy to assist, though they are often hard to find, particularly those in the sprawling Cheras Road Christian Cemetery in Kuala Lumpur which has no database of who is buried where. To make my job easier I have taken photos of any headstones that I come across with European sounding names, in case I get asked for them in future. (I have not covered those with Chinese or Indian names because there are far too many and also because their descendants are more likely to be still in Malaysia and they can look for themselves).

One of the more eye-catching headstones spotted on my last trip to Cheras Road Cemetery is this one: 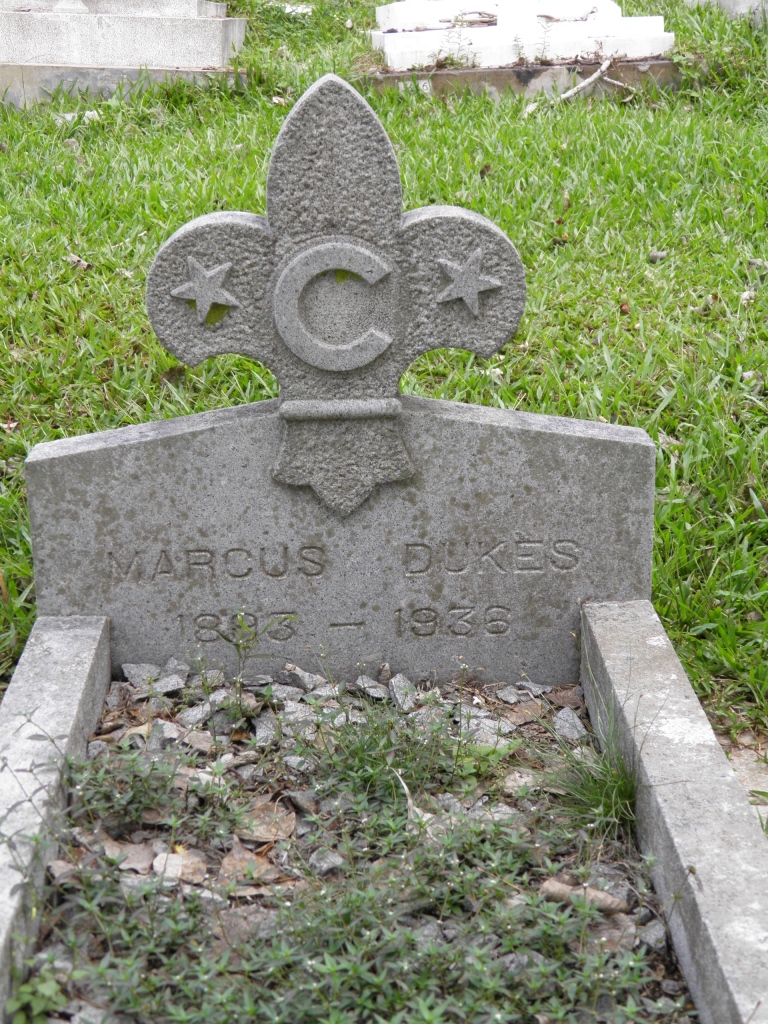 Thanks to the wonders of the internet we know something about Mr. Dukes.

He was born in Bridgwater, Somerset in 1893. He was the son of a clergyman, Rev. Edwin Joshua Dukes and his wife, Edith Mary (maiden name Pope) who was a gifted scholar.

Marcus had distinguished brothers, most notably Sir Paul Dukes KBE who was Chief of the British Intelligence Service in Russia and known as the Man of a Hundred Faces due to his talent for disguises. Interestingly, Paul was one of the first to introduce yoga to the western world.

Marcus came to Malaya in 1913 as an assistant on a rubber estate. At the time of his death was serving as Co-operative Marketing Officer (also related to rubber). Aside from work, he was District Commissioner of the Selangor Boy Scouts Association, which probably explains the headstone, and a member of the FMS Volunteer Regiment. He was a prominent Freemason and an Elder of the Presbyterian Church in Kuala Lumpur.

Though only 43, he had been sick for some time and died following an operation at Bangsar Hospital. He was survived by a wife and three children.

What does the letter “C” stand for on his headstone? Something to do with the scouts perhaps? Coincidentally, his brother Paul had been recruited into the secret service by Mansfield Smith-Cumming, the first “C” of MI6.