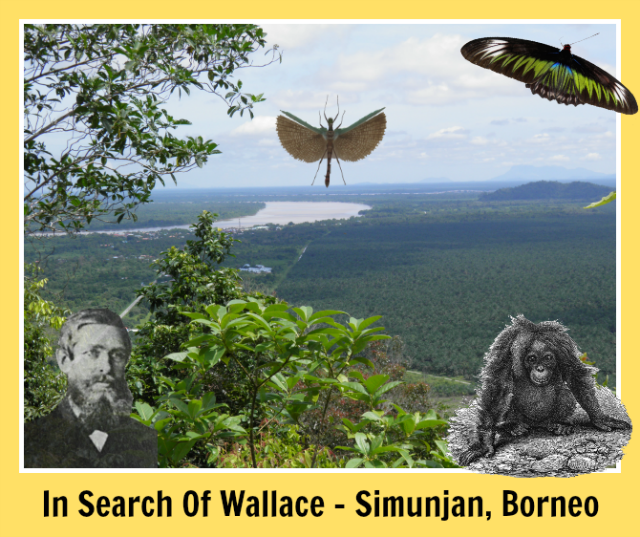 Alfred Russel Wallace spent 15 months in Borneo from November 1854 to January 1856. After exploring in the vicinity of Sarawak town (Kuching) he made a journey into ‘a part of the interior seldom visited by Europeans’.

This is how he described the area in The Malay Archipelago:

“In March 1865 I determined to go to the coalworks which were being opened near the Simunjon River, a small branch of the Sadong, a river east of Sarawak and between it and the Batang- Lupar. The Simunjon enters the Sadong River about twenty miles up. It is very narrow and very winding, and much overshadowed by the lofty forest, which sometimes almost meets over it. The whole country between it and the sea is a perfectly level forest-covered swamp, out of which rise a few isolated hills, at the foot of one of which the works are situated. On the slope of the hill near its foot a patch of forest had been cleared away, and several rule houses erected, in which were residing Mr. Coulson the engineer, and a number of Chinese workmen. I was at first kindly accommodated in Mr. Coulson’s house, but finding the spot very suitable for me and offering great facilities for collecting, I had a small house of two rooms and a verandah built for myself. Here I remained nearly nine months, and made an immense collection of insects.”

Click on the expand map symbol in the top right corner to view a larger map.

I thought I would have little chance of tracing this location based on such a scanty description but I found on the map the small town of Simunjan where the Simunjan River meets the Sadong River. A couple of miles from the town is the only hill for miles around which is today known as Gunung Ngeli (though it is more of a Bukit than a Gunung given its modest height).

Further internet searches revealed that this hill was once a coal mining area and this was indeed the place where Wallace spent nine months in 1865.

It is a 170km drive (each way) from Kuching and it took me about 3 hours to get there in my Perodua hire car. But the trip was worth it as Gunung Ngeli was, a few years back, converted into a recreational park with a trail and steps all the way to the top, so I was able to have a good look around.

I made this short video to show how Gunung Ngeli looks today.

Wallace stayed such a long time here because it was so rich in insect life. He adopted the practice of paying locals one cent for each insect brought to him and this yielded great results:

“I obtained from the Dyaks and the Chinamen many fine locusts and Phasmidae (stick insects) as well as numbers of handsome beetles.”

“When I arrived at the mines, on the 14th of March, I had collected in the four preceding months, 320 different kinds of beetles. In less than a fortnight I had doubled this number, an average of about 24 new species every day. On one day I collected 76 different kinds, of which 34 were new to me. By the end of April I had more than a thousand species, and they then went on increasing at a slower rate, so that I obtained altogether in Borneo about two thousand distinct kinds, of which all but about a hundred were collected at this place, and on scarcely more than a square mile of ground. The most numerous and most interesting groups of beetles were the Longicorns and Rhynchophora, both pre- eminently wood-feeders.”

“My collection of butterflies was not large; but I obtained some rare and very handsome insects, the most remarkable being the Ornithoptera Brookeana, one of the most elegant species known. This beautiful creature has very long and pointed wings, almost resembling a sphinx moth in shape. It is deep velvety black, with a curved band of spots of a brilliant metallic-green colour extending across the wings from tip to tip, each spot being shaped exactly like a small triangular feather, and having very much the effect of a row of the wing coverts of the Mexican trogon, laid upon black velvet. The only other marks are a broad neck-collar of vivid crimson, and a few delicate white touches on the outer margins of the hind wings. This species, which was then quite new and which I named after Sir James Brooke, was very rare. It was seen occasionally flying swiftly in the clearings, and now and then settling for an instant at puddles and muddy places, so that I only succeeded in capturing two or three specimens.” 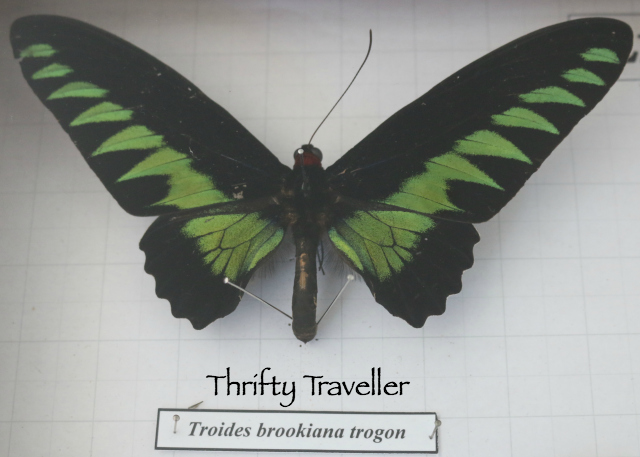 It was while Wallace was at Gunung Ngeli that he hunted and killed more than a dozen orang-utans, which nowadays would be a despicable thing to do but in his era would have been the only way to study the species in detail and besides, he financed his trip by selling skins and specimens to museums and collectors.

He describes these encounters in considerable detail. Here is one such excerpt:

“On the 12th of May I found another, which behaved in a very similar manner, howling and hooting with rage, and throwing down branches. I shot at it five times, and it remained dead on the top of the tree, supported in a fork in such a manner that it would evidently not fall. I therefore returned home, and luckily found some Dyaks, who came back with me, and climbed up the tree for the animal. This was the first full-grown specimen I had obtained; but it was a female, and not nearly so large or remarkable as the full-grown males. It was, however, 3 ft. 6 in. high, and its arms stretched out to a width of 6 ft. 6 in. I preserved the skin of this specimen in a cask of arrack, and prepared a perfect skeleton, which was afterwards purchased for the Derby Museum.”

I enquired with Derby Museum to see whether they still held any of Wallace’s specimens as I though it would be interesting to visit next time I am in UK. This  was their response:

“Derby Museums do not hold any orang-utan specimens collected by Alfred Russel Wallace. This is despite his book, ‘The Malay Archipelago’ (1869), clearly referring to material being killed and collected for Derby Museum. We now know these specimens are in the World Museum Liverpool which was then known as the Derby Museum, named after the main donor, the 13th Earl of Derby (resident of the nearby Knowsley Hall), whose bequeathed natural history collection formed the basis of their collections.”

After my climb up and down Gunung Ngeli, which took about 90 minutes, I drove on to the small town of Simunjan. which was probably non-existent or just getting established in Wallace’s time. No old buildings survive as the town is situated on a bend in the river and is prone to erosion. The earliest structures were washed away and the present town of around 60 shophouses dates mainly from the 1960s.

There are various theories as to how Simunjan got its name. The most plausible, and the one which Wallace might have found interesting, is that it was named after a bird called the Munjan as shown on this billboard. 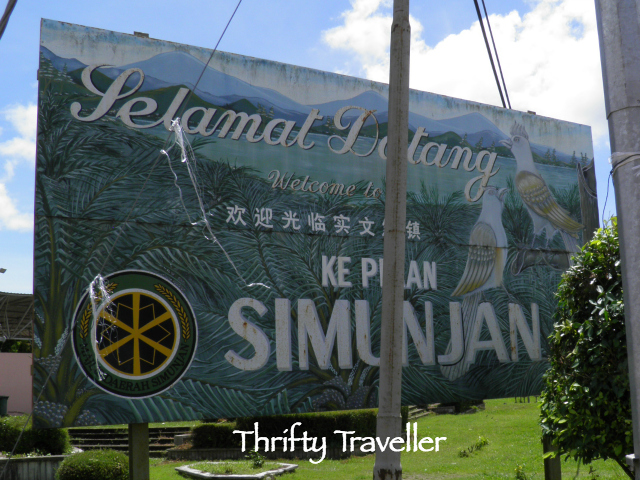 There was not a lot to see in the town but I had a light lunch and was warmly greeted by the friendly inhabitants.

13 thoughts on “In Search Of Wallace – Part 5: Simunjan, Borneo”