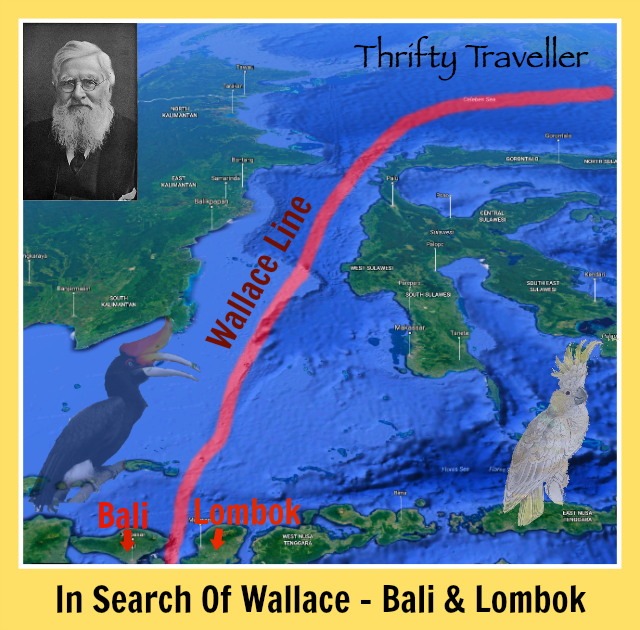 Perhaps the most lasting legacy of Arthur Russel Wallace’s eight year odyssey though the Malay Archipelago was his discovery of what came to be known as the Wallace Line, a boundary separating the faunal species of southeast Asia from those of Australia and New Guinea.

Wallace found this demarcation to be most abrupt when he travelled across the 35 kilometre wide Straits of Lombok between the islands of Bali and Lombok.

Although these neighbouring islands share similar terrain and climate Wallace was surprised by the differences in fish, bird and mammal life:

“Neither of these physical differences corresponds with the remarkable change in natural productions which occurs at the Straits of Lombock, separating the island of that name from Bali, and which is at once so large in amount and of so fundamental a character, as to form an important feature in the zoological geography of our globe.

During the few days which I stayed on the north coast of Bali on my way to Lombock, I saw several birds highly characteristic of Javan ornithology. Among these were the yellow-headed weaver (Ploceus hypoxantha), the black grasshopper thrush (Copsychus amoenus), the rosy barbet (Megalaema rosea), the Malay oriole (Oriolus horsfieldi), the Java ground starling (Sturnopastor jalla), and the Javanese three-toed woodpecker (Chrysonotus tiga). On crossing over to Lombock, separated from Bali by a strait less than twenty miles wide, I naturally expected to meet with some of these birds again; but during a stay there of three months I never saw one of them, but found a totally different set of species, most of which were utterly unknown not only in Java, but also in Borneo, Sumatra, and Malacca. For example, among the commonest birds in Lombock were white cockatoos and three species of Meliphagidae or honeysuckers, belonging to family groups which are entirely absent from the western or Indo-Malayan region of the Archipelago.”

Wallace did not climb Mount Rinjani. You can read about my trip of a few years ago here.