On my recent trip to UK I visited historic Sulgrave Manor, located in scenic Northamptonshire countryside in the heart of rural England. 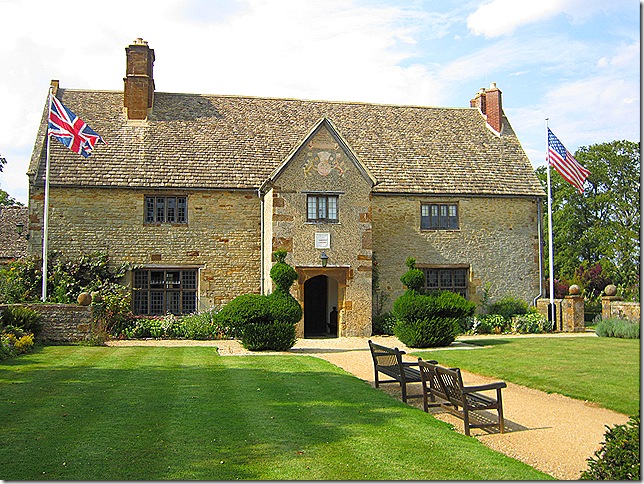 You might wonder what this has to do with the theme of my blog, “Strolls around Asia”, and the answer is not much. This relatively modest manor house was the home of Lawrence Washington, great-great-great-great-great grandfather of George Washington, who purchased the estate from Henry VIII in 1539.  If Lawrence’s descendants had found the place more to their liking they might never have migrated to America and who knows if the world might have turned out differently.

The Great Hall has been restored and furnished much as it might have looked in the Tudor era. The flagged stone floor must have been quite cold in winter. Our guide explained that instead of carpets they would have covered the floor with thresh (straw). The doors to the Great Hall  have raised sills in order to prevent the thresh from escaping, hence the term threshold.

Still on an etymological bent, the same room also contains a beautifully carved and inlaid piece of Elizabethan furniture known as the dole cupboard. This cabinet was used to store left-over food and ale to be doled out to the poor who would knock on the side entrance to the Great Hall. According to the guide, this is where we get the term on the dole.

Talking of ale, the manor house had its own brew house. In those days clean drinking water was hard to come by and most people would apparently drink beer instead. Even children would have supped weak ale for breakfast, unlike the youth of today who prefer fruit flavoured vodka .

The fascinating kitchen is filled with the implements and artefacts of the period. The bread oven was a rustic affair where a lump of dough was placed on the floor of the oven resulting in a hard blackened base to the loaf while the upper part was cooked just right. The bottom of the loaf would have been eaten by the servants whereas the upper crust was reserved for the master of the house. Hence the term upper crust when referring to the wealthy. Today of course we know the hard bit at the bottom as a pizza!

The bedchamber in Sulgrave Manor is also decorated in Tudor style. It has a very grand bed but no sign of an en-suite bathroom. Indeed the whole house was without a bathroom because (according to the guide) the Tudors rarely washed, apart from splashing their faces from time to time. Some say this is a myth but, if true, people must have had less sensitive olfactory systems those days to stand the stench. It was about this period that Europeans were starting to explore other parts of the world including the tropical shores of Asia. Given their poor hygiene habits it is hardly surprising that they easily succumbed to exotic diseases.