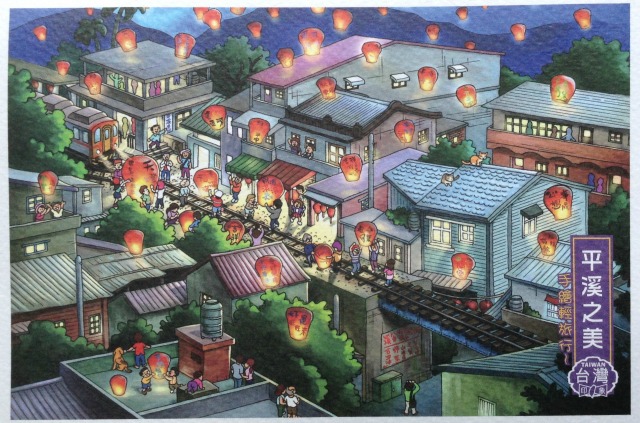 Shifen is a small town in north east Taiwan, about an hour’s journey by train from Taipei. It was once a coal mining area but has in recent years transformed itself into a popular tourist attraction.

The brightly painted trains of the Pingxi Railway chug their way along the Keelung Valley between Ruifang and Jingtong, stopping at various historical and scenic spots on the way, including Shifen.

When I went last week it was just an ordinary working Monday but still the train was jam packed with tourists, mostly local Taiwanese, Mainland Chinese, Japanese and Koreans (Asians make up 90% of all foreign tourists to Taiwan with China and Hong Kong residents totalling about 50%). 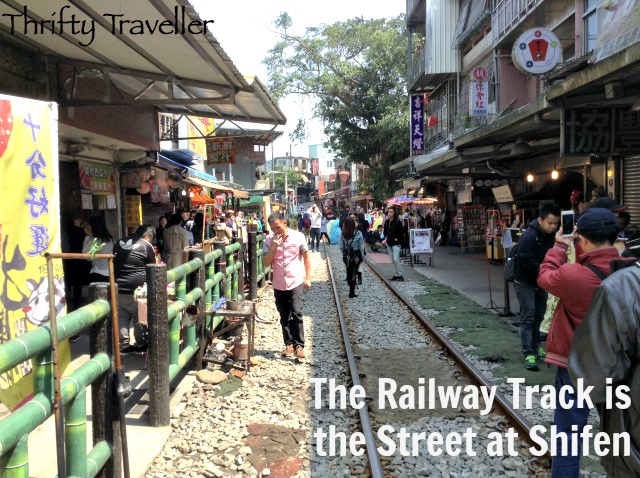 The town consists of a main street with the railway track running down the middle, and a few side streets. Shops either side sell touristy stuff, snacks and souvenirs.

Romantic couples like to write messages and wishes on sky lanterns, inspired by a famous film (not that I’ve seen it) called You Are the Apple of My Eye which was shot partly in this area. These lanterns are released into the sky, lifted by flaming burners which, I would have thought, must be responsible for a number of forest fires.

The main attraction in the area is the Shifen Waterfall which can be reached on foot in about 20 minutes.

This is Taiwan’s largest cascade fall. A sign nearby describes it as the Nicaragua Waterfall of Taiwan, presumably a typo for Niagara, with a similar horseshoe shape. Here is a short video clip:

After enjoying Shifen town and waterfall, most visitors jump back on the train and visit another place along the line, which is what I did as I’ll share in my next post.