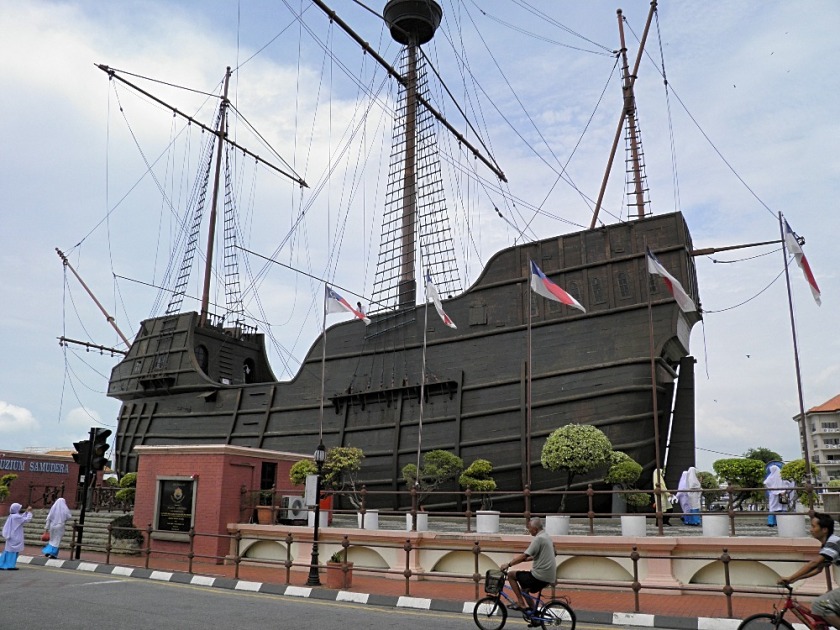 In Melaka, on the quayside near the mouth of the Malacca River, stands a replica of a Portuguese galleon, or carrack, called the Flor de la Mar which sailed in these waters in the early 1500s.

This vessel, which is often (mis?)spelt Frol de la Mar, was the flagship for the Portuguese fleet in the Indian Ocean under command of the famous conqueror Afonso de Albuquerque. 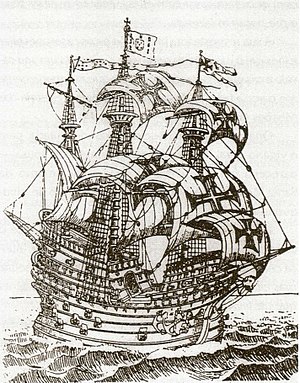 Flor de la Mar was built in 1502 in Lisbon. Weighing in at 400 tons, with a length of 120 feet and a height of 110 feet she was the largest vessel of its kind at the time. She was armed with 40 cannons distributed over three decks with a high stern and forecastle from which the crew could rain down fire on her enemies but this top-heavy design also made for poor stability when fully laden.

Her maiden voyage to the Indian Ocean departed Lisbon in 1502 under command of Esterão da Gama, a cousin of the explorer Vasco da Gama, returning to Portugal in 1503. The next voyage left Lisbon in 1505 under the captaincy of João da Nova. On her way back she sprang a leak and had to spend the winter in Mozambique before being commandeered by Afonso de Albuquerque for further missions in the Indian Ocean. She never saw Portugal again.

By 1505 King Manuel of Portugal’s attention had turned towards Malacca. When Vasco da Gama returned from his first voyage round the Cape of Good Hope as far as Calicut he brought back tales of a fantastically wealthy distant city called Malacca where all the goods of Asia were traded – pearls from Arabia, porcelain from China, cloth from India and nutmeg, cloves and pepper from the Spice Islands. It was the most cosmopolitan city in the world where over eighty languages were heard, according to the account of Portuguese apothecary and traveller Tomé Pires. With over 100,000 inhabitants, Malacca was larger than Lisbon at the time and almost as big as Venice, and it was ruled over by a Muslim Sultan. 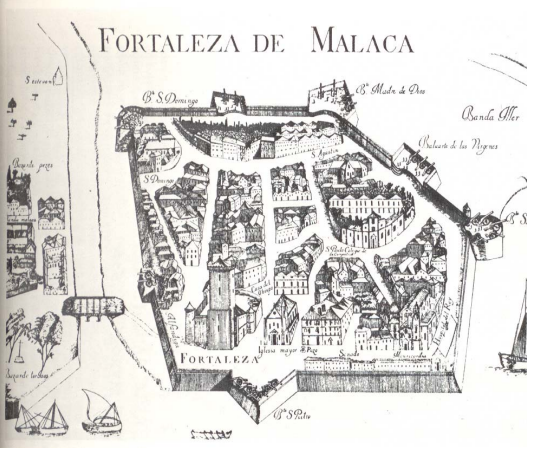 Pires wrote in his book Suma Oriental in 1515  ‘whoever is Lord of Malacca has his hand on the throat of Venice’ meaning that Malacca was the source of Venice’s spice monopoly wealth.

Albuquerque was determined to throttle Venice by seizing or at least gaining access to Malacca’s lucrative spice trade. Although he only had a small force of 700 Portuguese and 300 Indian soldiers he set about defeating the Sultan’s army with his usual ruthless efficiency and Malacca was conquered in 1511.

The city was plundered and Albuquerque, leaving a small force behind, set off with his loot for India aboard the Flor de la Mar accompanied by two other vessels the Trinidade and the Emxobregas. Some accounts, possibly exaggerated, say he had 60 tons of gold and 200 chests of precious gems with him intended as gifts for the Portuguese king and queen as well as a jewel encrusted table, a pair of bronze lions and a rare map drawn by a Javanese showing the routes to China and other lands.

His crew were reluctant to sail on the Flor de la Mar which by now was nine years old and barely seaworthy. Normally the ships on the India run could only survive four years or so before shipworms, nicknamed termites of the sea, caused irreparable damage to their unprotected wooden hulls. Also the vibrations caused by continual cannon fire had caused the Flor’s timbers to shake apart and the ship leaked badly and required constant pumping.

When  stormy weather struck off the coast of north Sumatra, Flor de la Mar anchored in four fathoms of water to ride out the storm. Heavy seas pushed her onto a reef where she ran aground and broke into two with only the superstructure visible above the waves. Albuquerque and a few other survivors managed to escape the wreck and they were taken aboard the Trinidade. Many of his crew and a number of slaves were not so lucky and were lost along with the treasure.

The Trinidade was overcrowded and they were desperately short of food and water.  Some captives were thrown overboard in their sleep to reduce the number of mouths to feed but the ship eventually made it back to Goa.

Numerous wreck divers and salvage companies have tried to find the location of the Flor de la Mar wreck in the hope of recovering some of the lost treasures but seemingly so far without success. With the ship sinking in shallow waters close to the shore you would have thought something would have been found by now.

Had this happened in our modern age of conspiracy theories and fake news people might have speculated that Albuquerque deliberately sank the ship and kept the loot concealed for himself rather than handing it over to the king. He wouldn’t be the last Portuguese colonial governor to enrich himself corruptly before proceeding on retirement. But that would be a terrible slur to make against a Portuguese national hero! Even if he did succeed in keeping some of the plunder for himself he would not have lived long to enjoy it as he died in Goa in 1515.