A hike from Houtong to Jiufen via the Jinzihpi Ancient Footpath.

After leaving Shifen (see previous post) I took the train to Houtong, another former coal mining settlement which now markets itself as Houtong Cat Village to draw in cat-loving tourists from around the world.

There were a number of cat-themed shops and cafes but I did not see many real cats. Perhaps, as it was a hot afternoon, they were all off somewhere having a shady siesta.

My main reason for coming here was because I had read that there is an ancient trail linking Houtong to Jiufen which was my ultimate destination for the day. What I didn’t realise is that there are a number of ancient trails traversing this hilly forested terrain and not all of them go where I wanted to go.

I finally came across a sign for Jinzihpi Ancient Footpath (also spelt Chintzupei) and luckily this trail took me in roughly the right direction.

I was lucky with the weather, mild and sunny, and from the highest point of the trail I could just make out Taipei 101 (the world’s tallest building until overtaken by Burj Khalifa in Dubai) some 35 km away.

The trail then emerged onto a road which I walked along for a few more kilometres before reaching a point overlooking the town of Jiufen.

Follow this road for another hour or so to reach Jiufen. 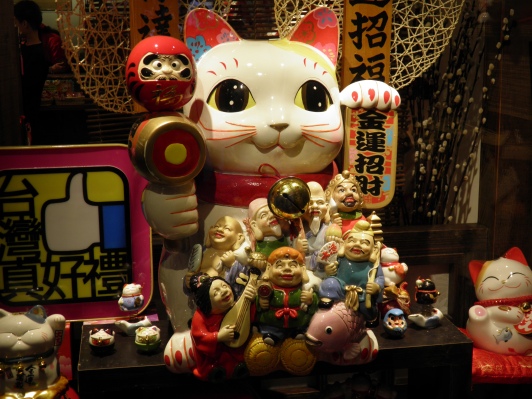 Some years ago on this blog I wrote about the Japanese animated film, Spirited Away (see post here).

Apparently the film’s producer, Hayao Miyazaki, took inspiration from Jiufen when creating some of the scenes in his film. Amei’s teahouse in particular is considered to be similar to the bathhouse in Spirited Away (can’t see the resemblance myself). Others however doubt this claim and some say there is no evidence he even visited Jiufen.

Whatever the truth, the story has done wonders for the town’s tourist trade and the narrow lanes around Jiufen Old Street are heaving with visitors, including many from Japan.

Definitely worth a visit when you are next in Taiwan.