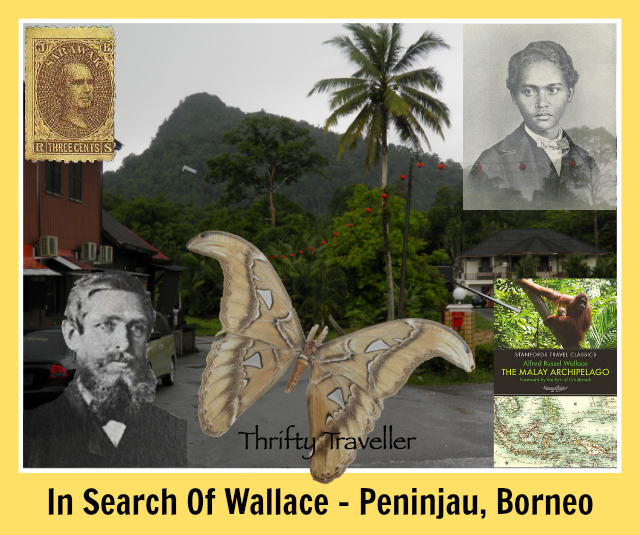 After spending 9 months at Simunjan (see last post), Alfred Russel Wallace made a shorter exploration of Bukit Peninjau, a small hill (1,646 feet high) some 20 km, as the bird flies, from Kuching town centre. He was initially accompanied by Sir James Brooke, the Rajah of Sarawak, whom he had met in Singapore and who maintained a small cottage on this hill. ‘Rajah’ was a grand job title, but Brooke had only been granted the role by the Sultan of Brunei some 14 years earlier and Sarawak was still in its rudimentary stage of development. As such, think of the cottage as more of a wooden shack than a palace. Wallace stayed at the cottage from 13–20 December 1855 and between 31 December 1855 and 19 January 1856.

Wallace described the hill as follows:

“On reaching Sarawak early in December, I found there would not be an opportunity of returning to Singapore until the latter end of January. I therefore accepted Sir James Brooke’s invitation to spend a week with him and Mr. St. John at his cottage on Peninjauh. This is a very steep pyramidal mountain of crystalline basaltic rock, about a thousand feet high, and covered with luxuriant forest. There are three Dyak villages upon it, and on a little platform near the summit is the rude wooden lodge where the English Rajah was accustomed to go for relaxation and cool fresh air.”

Wallace would have approached the hill by river, disembarking at the jetty where the village of Siniawan now stands.

“It is only twenty miles up the river, but the road up the mountain is a succession of ladders on the face of precipices, bamboo bridges over gullies and chasms, and slippery paths over rocks and tree-trunks and huge boulders as big as houses. A cool spring under an overhanging rock just below the cottage furnished us with refreshing baths and delicious drinking water, and the Dyaks brought us daily heaped-up baskets of Mangosteens and Lansats, two of the most delicious of the subacid tropical fruits.”

Local government officials announced a few years back an intention to promote Bukit Peninjau  (also known as Bung Muan and Gunung Serumbu) as a tourist destination and at least the place is signposted.

My trip to the hill was unfortunately a bit of a wash-out. 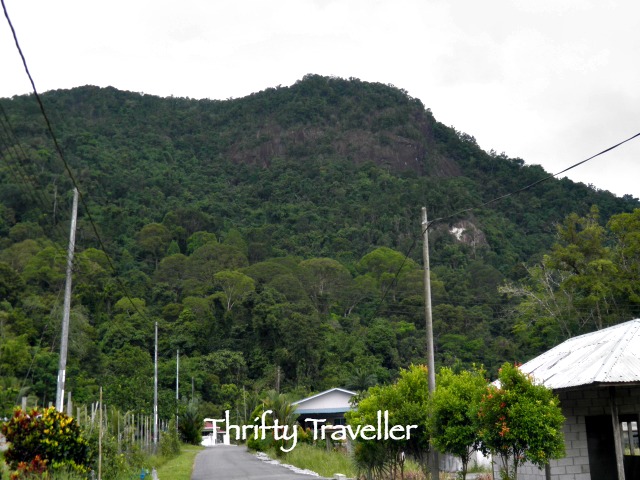 The sky looked fairly bright as I approached the foot of the hill. 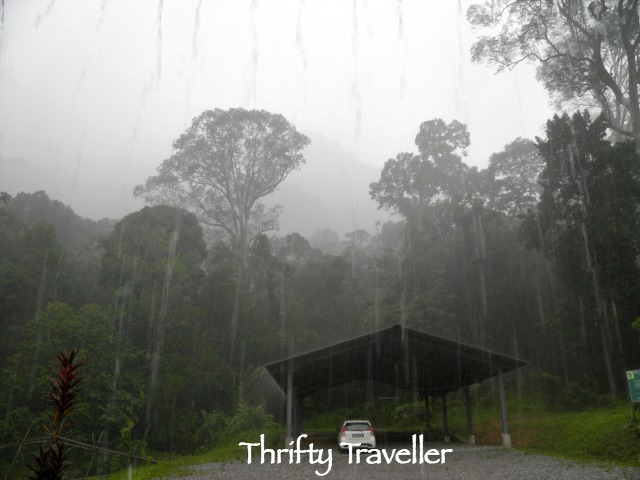 But as soon as I parked my rental car the heavens opened and the hill disappeared behind the clouds. 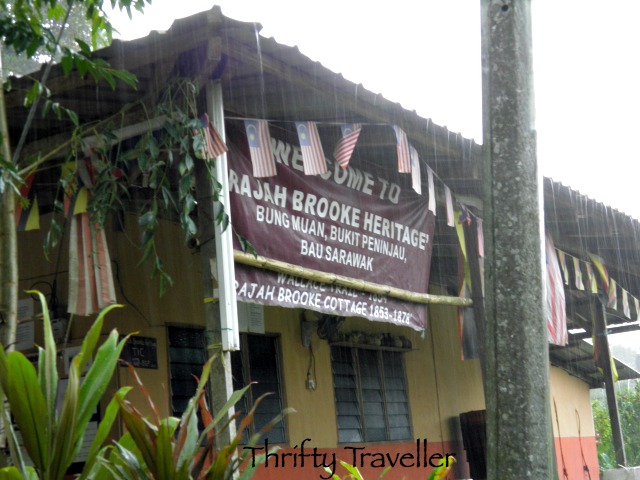 I took shelter under the eaves of the Tourist Information Centre. Here you are supposed to be able to hire a local guide for RM50 to take you up the Wallace Trail but the place was locked and there was nobody around. Visitors are advised not to go alone but having no other choice, I dropped my contribution into the donations box and set off up the hill once the rain had eased off somewhat. 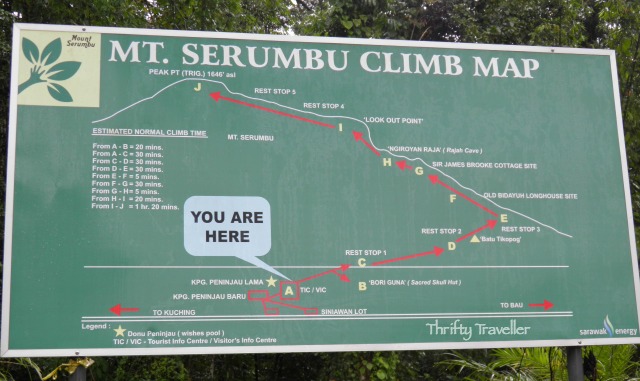 There is a map with estimated climb times. According to their estimates it should take nearly 4 hours to reach the peak. 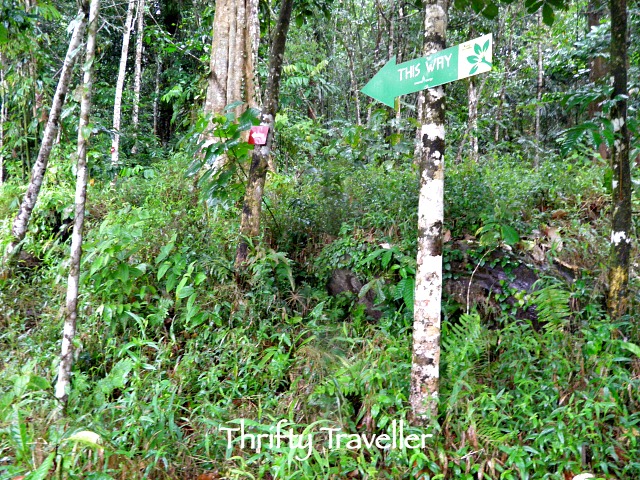 There were quite a lot of arrows pointing the way which was reassuring but the path itself was overgrown with dense foliage which I dislike (I would make a very poor Wallace being scared of snakes, spiders and other creepy crawlies!).

Wallace was impressed with the versatile qualities of bamboo and the ingenious ways in which the local tribesmen put it to good use. In this chapter of The Malay Archipelago he wrote about bamboo bridges and I was pleased to see this example of one at Bukit Peninjau. 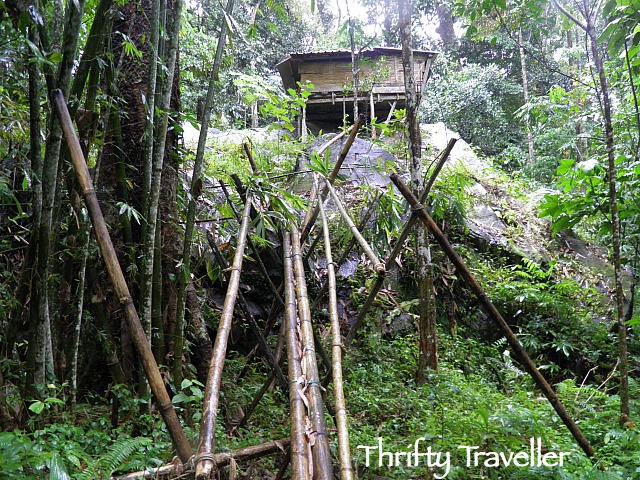 The wooden hut here is similar to ones I have seen in Peninsular Malaysia used as watch houses to guard over valuable durian trees during the ripening season. It might perform the same purpose here.

He was also fascinated by ladders made by driving bamboo pegs into a tree trunk:

“I was exceedingly struck by the ingenuity of this mode of climbing, and the admirable manner in which the peculiar properties of the bamboo were made available. The ladder itself was perfectly safe, since if any one peg were loose or faulty, and gave way, the strain would be thrown on several others above and below it. I now understood the use of the line of bamboo pegs sticking in trees, which I had often seen, and wondered for what purpose they could have been put there.” 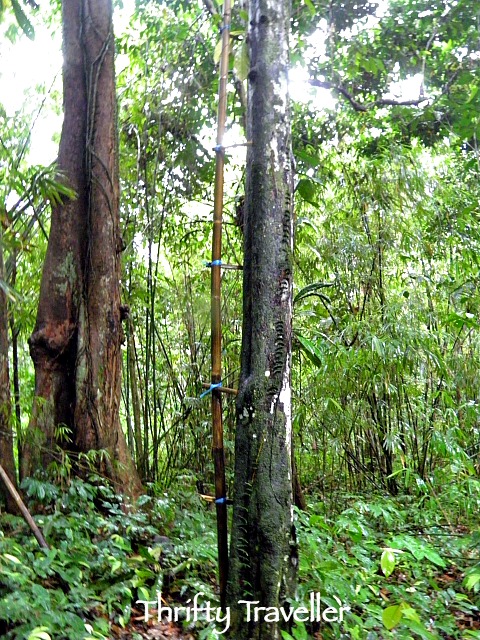 I was amazed to see a similar ladder in almost the same location 160 years after Wallace’s time, the only difference being that they now use blue plastic twine to secure the pegs instead of strips of wood bark. 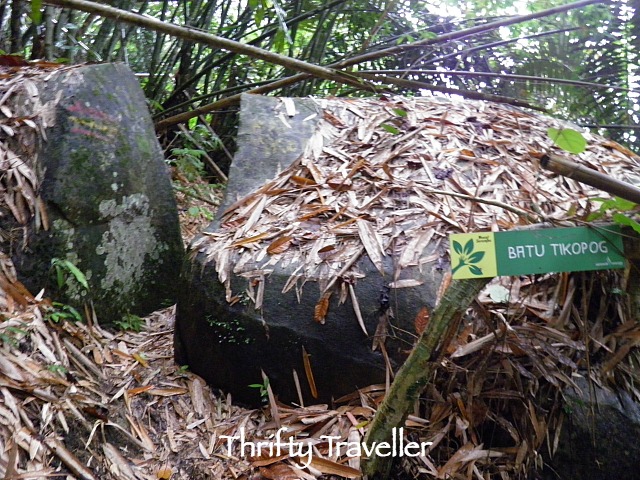 By the time I reached Batu Tikopog, a rock with an unusually smooth cleft, the rain started to intensify with thunder and lightning in the air. I decided to abandon my trek to the peak since visibility would have been zero. It’s a shame I didn’t manage to see the site of Brooke’s cottage either. Nothing remains of the cottage now except an indistinct clearing in the jungle. Plans to rebuild the cottage were announced a few years ago but nothing yet seems to have happened. Perhaps I’ll revisit one day once the cottage has been rebuilt.

After Christmas in Kuching, Wallace returned to Bukit Peninjau, this time accompanied by his English assistant and a Malay servant.

“A few days afterwards I returned to the mountain with Charles and a Malay boy named Ali and stayed there three weeks for the purpose of making a collection of land-shells, butterflies and moths, ferns and orchids. On the hill itself ferns were tolerably plentiful, and I made a collection of about forty species. But what occupied me most was the great abundance of moths which on certain occasions I was able to capture. …during the whole of my eight years’ wanderings in the East I never found another spot where these insects were at all plentiful,…It thus appears that on twenty-six nights I collected 1,386 moths.” 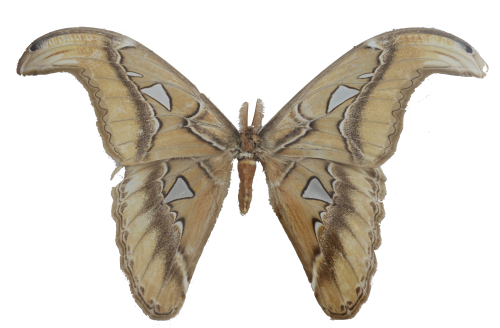 The hill is still teeming with insects. Most of Wallace’s moth collecting took place at night but even during the daytime this place has some of the noisiest bugs I’ve ever heard as this ten-second video attempts to show.

“When I returned to Singapore I took with me the Malay lad named Ali, who subsequently accompanied me all over the Archipelago. Charles Allen preferred staying at the Mission-house, and afterwards obtained employment in Sarawak and in Singapore, until he again joined me four years later at Amboyna in the Moluccas.”

Writing in his autobiography many years later, Wallace wrote about Ali:

When I was at Sarawak in 1855 I engaged a Malay boy named Ali as a personal servant, and also to help me to learn the Malay language by the necessity of constant communication with him. He was attentive and clean, and could cook very well. He soon learnt to shoot birds, to skin them properly, and latterly even to put up the skins very neatly. Of course he was a good boatman, as are all Malays, and in all the difficulties or dangers of our journeys he was quite undisturbed and ready to do anything required of him. He accompanied me through all my travels, sometimes alone, but more frequently with several others, and was then very useful in teaching them their duties, as he soon became well acquainted with my wants and habits.

He was less glowing about Charles Martin Allen who was just a teenager when Wallace took him to South East Asia as his collecting assistant. In his letters , Wallace complained about Allen’s carelessness and inability to learn.

Of all the Wallace trails I have visited so far this one is perhaps the most interesting and is fairly easy to access from Kuching. Pity about the weather though! Try to go on a dry day and see if you can get hold of a guide.

A map showing the location of Bukit Peninjau appears on my previous post about Wallace.

To read about another trip up Bukit Serumbu in Wallace’s footsteps, this one in 1912, see here.