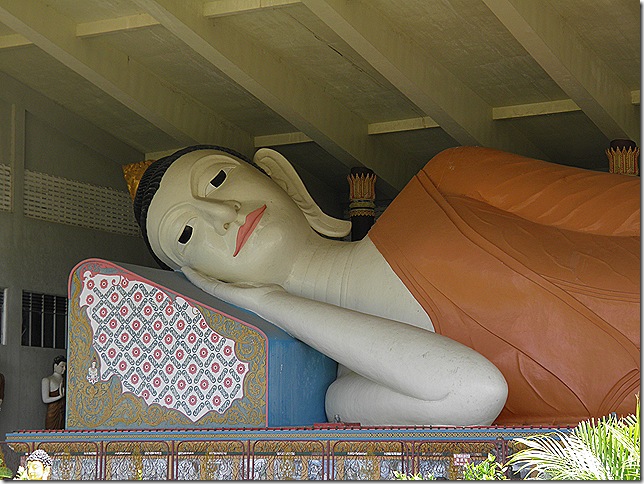 I have visited a number of Reclining Buddha statues over the years and I thought it would be interesting to find out how many more are out there. The answer is a lot! 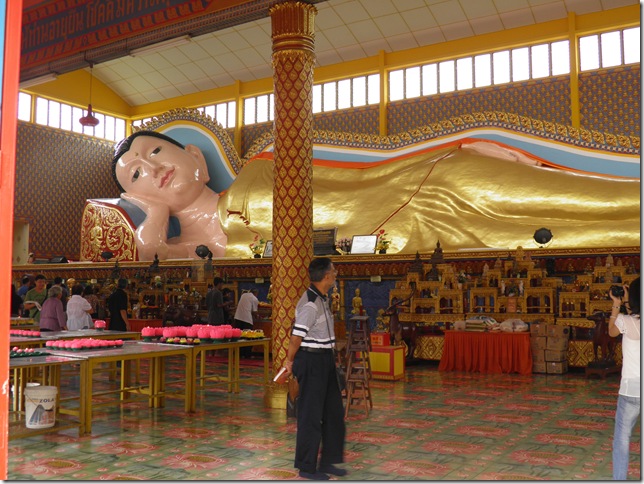 I have trawled the internet to see if there is a definitive list but there doesn’t seem to be one. That could be because there are so many of these statues.  I started to piece together a list but gave up when I reached 30 as I kept finding new ones. The following is as far as I got, ranked in order of size (length). Needless to say there are very many omissions and errors. 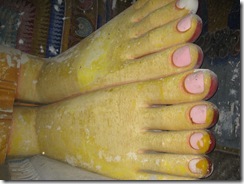 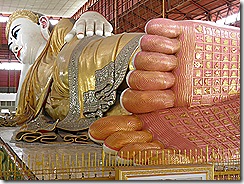 Finally, the smallest reclining Buddha statue that I came across is the Jade Buddha, Shanghai, China which measures only 96 centimetres but it is made of precious jade. 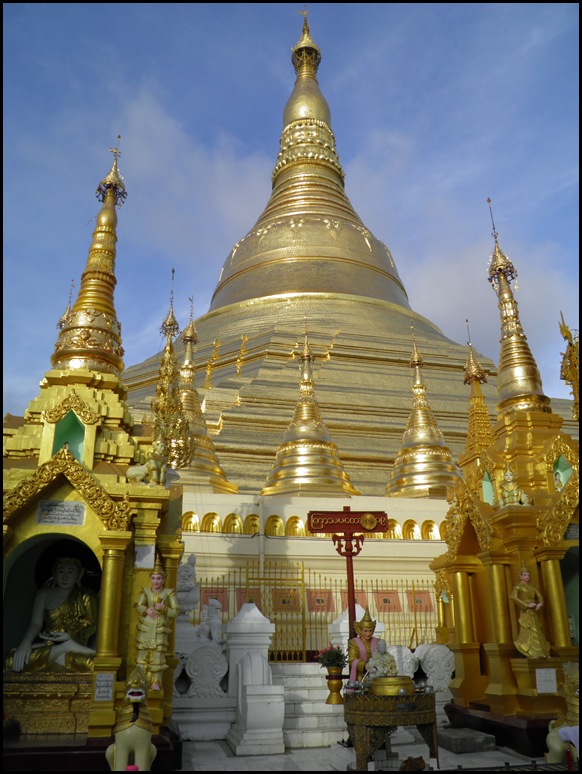 When AirAsia announced that they were going to begin flying to Yangon (Rangoon) in Burma in July with a promotional fare of just RM4 one way, it seemed too good an opportunity to miss. Even after paying for the return flight (a bit more expensive),taxes,  meals and check-in baggage, the fare was still very reasonable so I decided to take my son along for a short city break in Yangon.

Burma has for years been on my list of countries to visit. I’d been putting it off. Lots of people say that you shouldn’t go to Burma because you would be helping to prop up the military government which many regard as illegitimate especially while they continue to hold the popular Ms. Aung San Suu Kyi under house arrest.  Well I don’t think my visit put too much money in military pockets. Maybe the guy at the airport who guided us to a waiting taxi then asked for a USD1 tip. He must be well connected to be able to wait at such a prime spot inside the airport. Then there was the cost of the visa from the Myanmar embassy. The visa cost more than the flight! But apart from that I tried to spread my thrifty spending towards people who did not appear likely to have official connections.

I booked a room at the Panda Hotel in Yangon. It was very reasonable at around USD22 per night net including breakfast for two. It was clean and comfortable enough but not a lot of frills. Its list of facilities included ‘4 No. of Lifts’. How exciting! The reception staff were very helpful and efficient and greeted me by name even before I had checked in which I thought was impressive. Using this hotel as our base we were able to explore the city, mostly on foot. 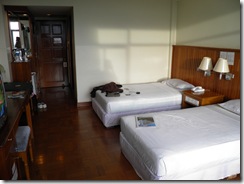 There a few oddities in Burma. Burma drives on the right side of the road (apparently they switched to the right side in the 1960s to break from the practice during British colonial days). That’s fair enough, other countries have done the same. However the majority of the cars on the road are ancient second hand Japanese models which have their steering wheels on the right side. This makes overtaking very dangerous as the driver has to pull out into the oncoming lane in order to see if the road is clear. Not such a problem in Yangon where traffic moves slowly but I imagine it must cause lots of accidents up-country. A case of two rights making a wrong.

Taxis were plentiful and cheap and the drivers were probably less roguish than in many other countries. The taxis were very ancient and clapped-out though.

Money matters are also a bit unusual. You used to have to change at least USD200 per head into Foreign Exchange Certificates on arrival at the airport and you would use these FECs for all expenditure during your stay but this requirement seems to have lapsed . You wouldn’t want to change dollars into the Burmese currency (kyat – pronounced chut) at the airport or at a bank because you would probably get the official exchange rate of around 6 kyat to USD1 whereas the black market rate is closer to 1000 kyat to USD1. So everyone changes their money with the unofficial money changing guys who hang around the main tourist areas of Yangon. You don’t need to change much though because US dollars are readily accepted just about everywhere. But you do need to make sure that your dollars are in almost perfect condition because they won’t take notes which are crumpled, folded, marked by pen or even the tiniest bit torn. By the time I left Burma I had a wallet full of slightly imperfect dollar bills which could not be exchanged in Burma. Luckily I’ll probably be going to the Philippines soon where they will take dollars in any condition! 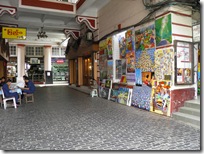 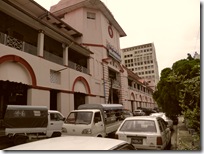 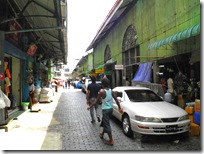 Bogyoke (Scott) Market is a good place to change money and a good place to spend it. Gems, wooden carvings, Burmese lacquerware, and embroidered fabric products made by the minority Kachin people were some of the attractive goods on offer and I bought some of each.

Yangon has more examples of British colonial era architecture than probably any other city in Asia, though some of the buildings are looking rather dilapidated (hover the mouse over the picture to see the caption): 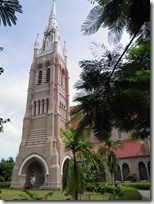 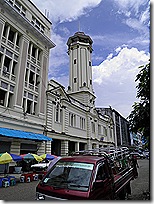 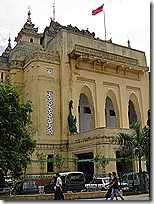 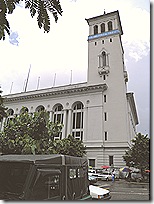 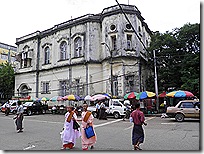 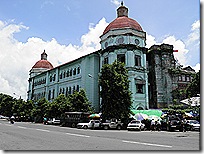 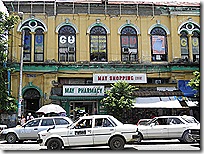 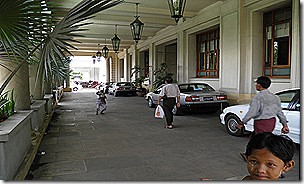 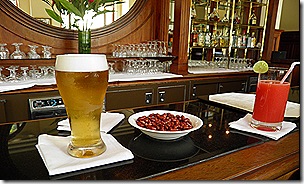 Despite my love for old colonial buildings, the real highlight of any visit to Yangon has to be the exquisite Shwedagon Pagoda. This impressive Buddhist temple complex comprises dozens of pagodas and hundreds of Buddha statues surrounding a massive golden stupa said to contain some hairs from the head of Buddha. 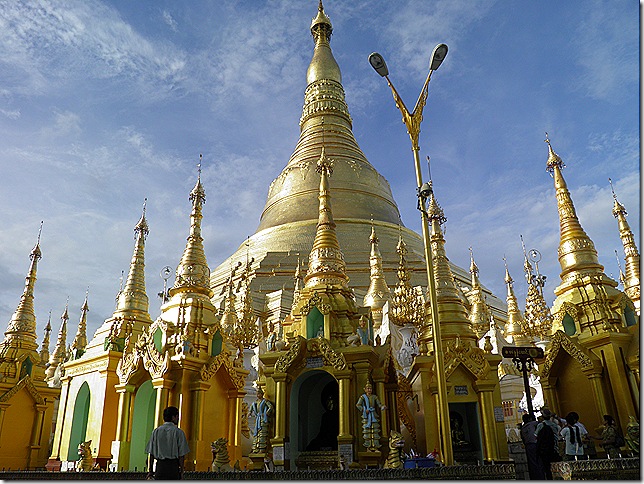 Covered with solid gold plates and gold leaf, the pagoda reaches a height of almost 100 meters and the top is encrusted with thousands of diamonds, rubies and sapphires including a monster diamond of 76 carats. 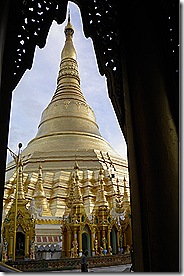 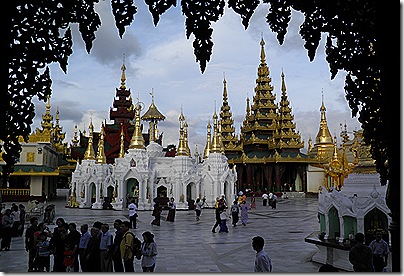 A friendly guide latched on to us explain all the features and history of the pagoda. He was knowledgeable and pleasant but did insist on telling me the precise spot to take photos from and how to compose the shot. So if you have been to this place and you had the same guide as me, you will have exactly the same photos as these two.

Chauk Htet Gyi Pagoda is another place worth visiting. It houses what must be one of the world’s largest reclining Buddha’s with a length of almost 66 meters. 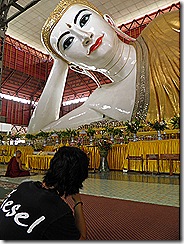 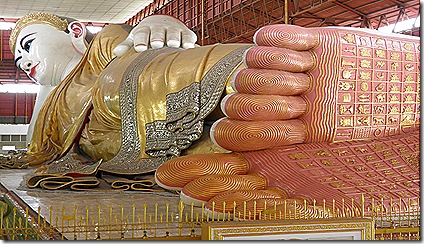 The National Museum is a also quite an interesting place to kill an hour or two. The building itself is very ugly and the displays are rather dated and the lighting is poor but the exhibits themselves are worth a visit. Cameras were not allowed inside so I cannot show any pictures but here is the handsome exterior: 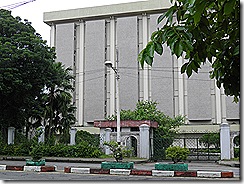 Overall my impression of Yangon (based on a very short visit) was that the people are very nice; reserved, polite and helpful and the standard of English is quite good. Decent places to eat are not abundant unless you are brave enough to sample the street food. The city is well worth a visit for a day or two but I can understand why most tourists do not linger in Yangon but instead head straight for places like Mandalay and Pagan. 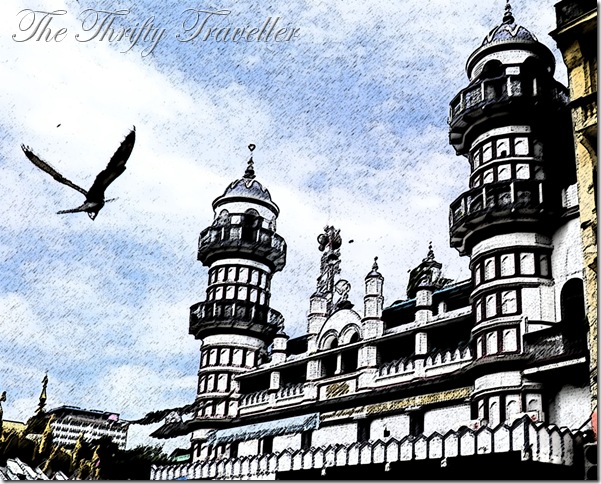