I have run out of empty pages in my British passport so I am applying for a new one. The UK Government has introduced an ‘improved’ method for passport application for British citizens living overseas.

In the old days you would pop into your local British Embassy , drop off the completed forms, old passport, photos and payment and, about a week later, your new passport would be ready for collection.

Now you have to complete the application form and make payment online then send your old passport, photos and signed declaration off to Liverpool where it is centrally processed and, if all goes well, the new passport is sent back by courier after 4 weeks.

I don’t have a lot of confidence in sending off my passport to UK by ordinary mail or even registered mail so I forked out for UPS courier at a cost of £45. That’s expensive but better safe than sorry. This is in addition to the UK Passport Office’s charge of £110 for passport renewal which includes the return courier charge.

I thought I would track the package on UPS’s website to see if it has been delivered safely. I was rather surprised to see that my passport has had quite a journey: 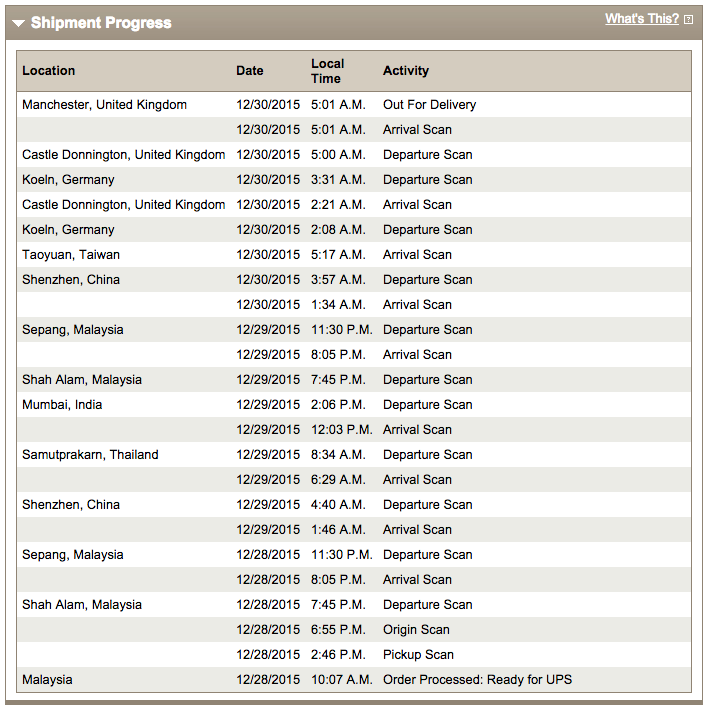 After being picked-up here in Malaysia it went to Shenzhen in China before being shipped off to Mumbai after a short stop en route in Thailand. From India it was sent back to where it started in Malaysia, then despatched off to Shenzhen a second time. Then off to Taiwan where it caught the red-eye flight to Koln in Germany. Then to Castle Donnington (somewhere near Derby – getting warmer!) Then back to Koln a second time  (getting colder) before being returned to Castle Donnington once more and then on to Manchester. As I write this my passport is out for delivery and, assuming it is not re-routed back to Shenzhen, is scheduled to reach Her Majesty’s Passport Office in Liverpool by this evening, by which time they’ll be closed for their New Year’s holidays.

Amazingly UPS managed to achieve this global odyssey in just 48 hours which is really good going. But they could have just put the package on Malaysian Airlines’ direct KL to Manchester flight and reached there in 13 hours.

Here’s how UPS’s routing looks on a map: 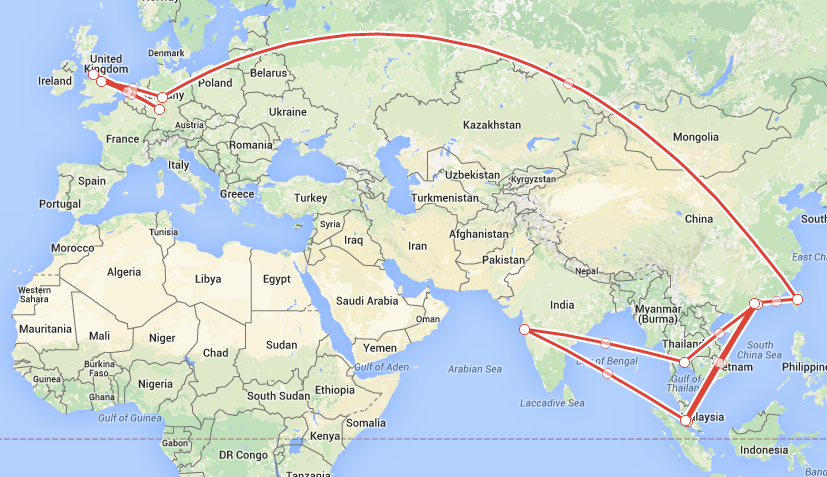 I understand that courier companies operate a hub-and-spoke system but from an efficiency and fuel-saving point of view there has to be a more direct route. At least now I understand why they charge so much!