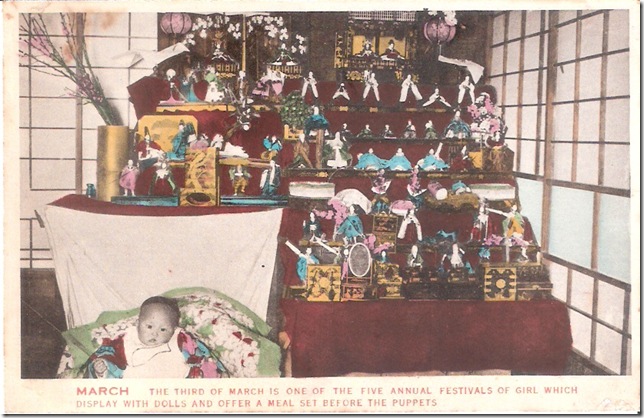 This festival has its roots in an ancient practice imported from China in the 7th Century. Originally people would attach paper figures to sticks and rub them over their bodies to absorb all the bad spirits and then throw them in the river as a kind of purification ceremony. Over the years this custom evolved into making straw dolls which were set adrift in rivers or in the sea.

As centuries passed, the dolls became more and more elaborate until the the present day when they are far too expensive to throw away. Single dolls, with embroidered silk costumes can cost a small fortune and nowadays they are more of a way of showing off a family’s wealth than a means of ridding bad spirits

Typically the dolls are displayed on 5 or 7 shelves covered in a rich red fabric. On the top shelf are dolls representing the Emperor and Empress. When this postcard photo was taken the practice was just to have nobility on the top shelf but in the patriotic fervour leading up to WWII, likenesses of the Emperor and Empress were used instead and that practice remains.

The second shelf is for three court ladies, one of whom is serving sake. Lower shelves are for musicians, ministers and bowls of food, three drunkards (one maudlin, one cantankerous and one merry) furniture, carriages, palanquins and lacquer boxes. The dolls wear traditional court dress from a thousand years ago.

The dignified and genteel way the dolls sit silently on their shelves was once reckoned to be a good example for the behaviour of young girls. Presumably the drunkard dolls were seen as good role models for the Japanese sarariman!

Families put up their doll displays from February and they are supposed to be taken down no later than the 4th of March otherwise the daughter of the house may have a late marriage. (Not such a big deal these days perhaps.) On Girls’ Day families will drink sake and eat special crackers and rice cakes. It is time to pray for the health and well being of young girls. A nice tradition!