After his time in Gading and Ayer Panas, Wallace continued his travels by visiting the fabled Mt. Ophir (Gunung Ledang), a 1276m high (4186ft.) peak straddling the border between Malacca and Johor states. He writes:

“Having determined to visit Mount Ophir, which is situated in the middle of the peninsula about fifty miles east of Malacca, we engaged six Malays to accompany us and carry our baggage. As we meant to stay at least a week at the mountain, we took with us a good supply of rice, a little biscuit, butter and coffee, some dried fish and a little brandy, with blankets, a change of clothes, insect and bird boxes, nets, guns and ammunition. The distance from Ayer-panas was supposed to be about thirty miles.”

Nowadays Mt. Ophir is a popular climbing spot, being the highest mountain in Johor and the closest peak of any size to Singapore. There are two main ways of accessing the mountain. One is via Sagil, a town in Johor, the other, slightly shorter, is through Asahan in Malacca. Wallace almost certainly took the Asahan route since he approached from the Malacca side. Also he made no mention of the waterfall which he would probably have encountered if he had ascended from the Johor side. He continues:

“Our first day’s march lay through patches of forest, clearings, and Malay villages, and was pleasant enough. At night we slept at the house of a Malay chief, who lent us a verandah, and gave us a fowl and some eggs.”

I estimate the half way point between Ayer Panas and Asahan village (the trailhead) to be somewhere close to Kampung Chabau where he might have stayed in a house like this, a building that looks to be of some age, with its original attap thatch roof long since replaced by corrugated iron sheeting.

“The next day the country got wilder and more hilly. We passed through extensive forests, along paths often up to our knees in mud, and were much annoyed by the leeches for which this district is famous.”

“We came out upon the “Padang-batu,” or stone field, a place of which we had heard much, but could never get anyone to describe intelligibly. We found it to be a steep slope of even rock, extending along the mountain side farther than we could see. Parts of it were quite bare, but where it was cracked and fissured there grew a most luxuriant vegetation, among which the pitcher plants were the most remarkable.”

This photo of the same spot was taken in 1934 by G.H. Lowe who wrote that it was shrinking in size: “The path now goes down to the Padang Batu, the Field of Stone, once much bigger, but vegetation is rapidly covering it.”

I have visited Gunung Ledang National Park twice but although I have pottered around the lower slopes and the Puteri Waterfalls I have not yet climbed to the top. A few things have put me off; compulsory guide, high cost, need to book well in advance, the ‘technical sections’ where some scrambling up ropes is required, history of accidents and so on. Besides, the view from the top, although as panoramic as any mountain in Peninsular Malaysia, is not really that special. Here’s what Wallace had to say about it:

“The top is a small rocky platform covered with rhododendrons and other shrubs. The afternoon was clear, and the view fine in its way–ranges of hill and valley everywhere covered with interminable forest, with glistening rivers winding among them. In a distant view a forest country is very monotonous, and no mountain I have ever ascended in the tropics presents a panorama equal to that from Snowdon, while the views in Switzerland are immeasurably superior.”

I have to agree with him about the views, particularly in respect of Malaysian mountains. The climb is seldom worth the effort. Pity he did not climb Mt. Rinjani while he was on Lombok. The views on that mountain could give Switzerland a run for its money.

As previously mentioned there are two main hiking trails up Mt. Ophir but I noticed from Google Maps that there is also a road which winds its way right up to the telecom towers just below the summit. I thought I would cheat and drive up to the towers and just walk the final 10 minutes or so to the top. I had read an account of somebody who had done it. The road started out OK, a red laterite gravel road bordering oil palm plantations brought me to the foot of the mountain. As the track ascends the mountain it deteriorates and what was once a metalled road is now full of potholes where storms have washed away the surface. After half an hour or so of slow but steady progress I reached a giant notice erected by the Johor Forestry Department warning the public not to go any further at the risk of a sizeable fine and/or six months imprisonment. Not willing to go to prison just for the sake of a blog post, I reluctantly turned back.

Wallace does not go into detail about the animal and insect species gathered on Mt. Ophir and he was apparently more impressed with the flora such as these rare ferns illustrated in his book.

He reported seeing rhinoceros tracks but did not see the actual animal, nor any tigers, both of which still roamed the area in his day. No chance of seeing those today but I was startled by this enormous monitor lizard emerging from a litter bin at great speed, hence the artistic blurry photo.

Wallace seemed satisfied with his time at Mt. Ophir:

“Mount Ophir has quite a reputation for fever, and all our friends were astonished at our recklessness in staying so long at its foot; but none of us suffered in the least, and I shall ever look back with pleasure to my trip as being my first introduction to mountain scenery in the Eastern tropics.”

Perhaps I should try climbing it one of these days.

Almost the first thing you see when crossing into Johor state from the north is a mountain, Gunung Ledang which rises abruptly from the surrounding coastal plane.

The mountain is the highest in Johor at 1276m (4187 ft) and is surrounded by the Gunung Ledang National Park.  There are a few access points into the park including one at Asahan in neighbouring Melaka state.

I took the most popular entry point at the Gunung Ledang Resort hotel near Sagil. I had already decided I was not going to try climbing the mountain on this visit. You have to hire a guide and it is not that easy as this signpost explains: 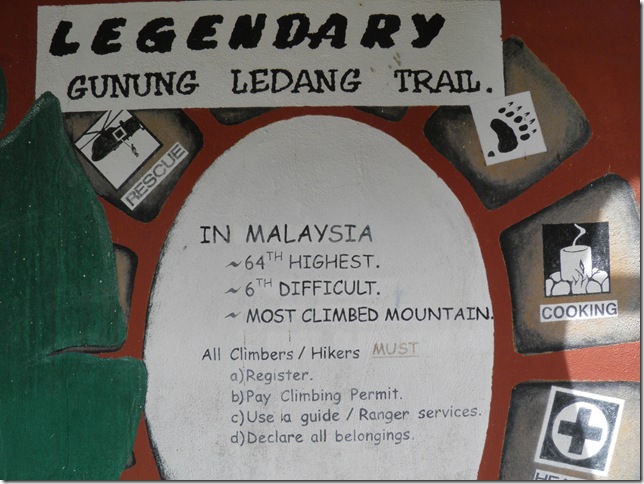 I’ll save that climb until my sons are available to accompany me.

Instead I took a look at the Puteri Waterfalls  – an easy 20 minute hike from the park’s entrance. The track is paved and has proper steps and there is little chance of getting lost.

I got a start when I saw a fat snake-like tail sticking out of a litter bin. Luckily it was just a harmless scavenging monitor lizard, albeit a big one. (Excuse my camera shake – I must have been nervous!).

The waterfall itself was quite impressive. A few people were bathing in the pools below, ignoring the signs warning of the risk of communicable diseases from swimming or wading in contaminated water.