When you step off the train in Ipoh you are already standing in the city’s number one landmark, the magnificent neo-classical Ipoh Railway Station, completed in 1917. This building, which also contains the Majestic Hotel, was designed by that industrious and talented government architect,  A B Hubback who planned many of Malaysia’s other famous old buildings from that era. 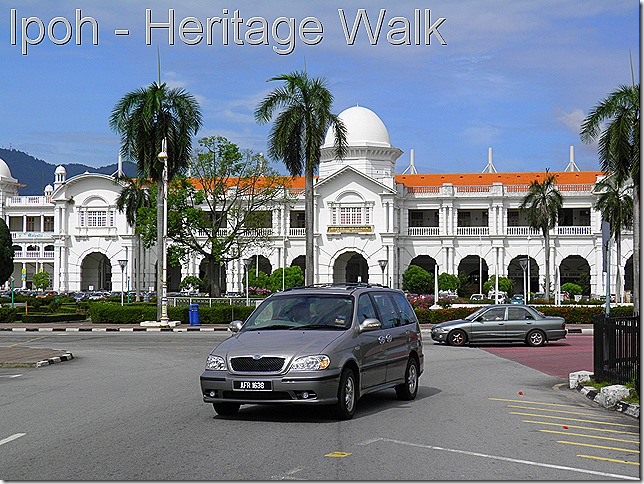 Taking advantage of KTM’s smart new Korean-built electric train service, I completed the 200 km trip from Kuala Lumpur in 2 hours and 17 minutes for a fare of RM30 each way. The train was punctual, the air-conditioning was set at a comfortable temperature, the movie (Cinderella Story) had the volume down low so I had no complaints at all.  And the guy who cleaned the toilets kept them in gleaming condition so he deserves a pat on the back. 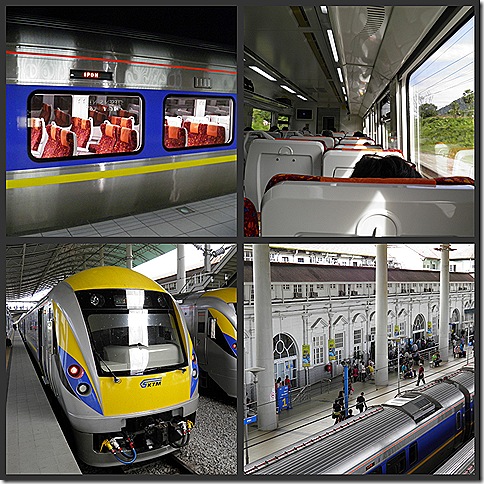 Ipoh is a compact city and I was able to see many of its attractions within walking distance of the station.

I began by taking the ancient caged lift outside the station entrance up to the lobby of the Majestic Hotel which sits above the station. This hotel has seen better days. Once grand, it now offers rooms at just RM75 per night including breakfast. Its colour brochure boasts of a bar with a snooker table but I was told by the receptionist that they do not serve beer any more.  Still, I was able to take in the view from the hotel’s massive verandah and pick up a couple of excellent maps of Ipoh’s Heritage Trail published by Kinta Heritage. 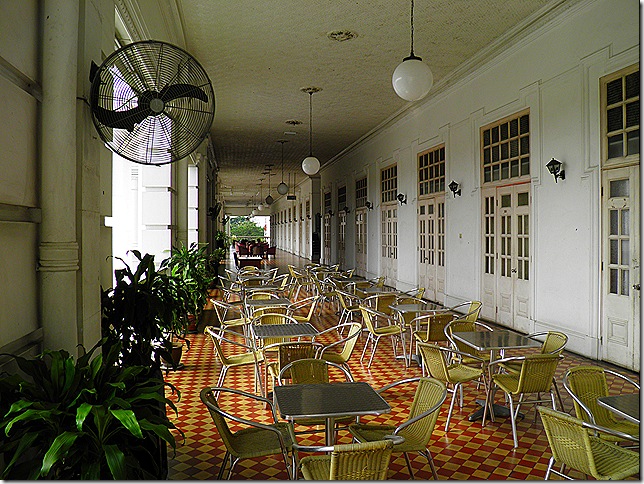 Just in front of the station is a small park containing an example of the Ipoh tree after which the city was named. The tree, which looks harmless enough, apparently contains a poisonous sap used for making deadly blowpipe arrows. 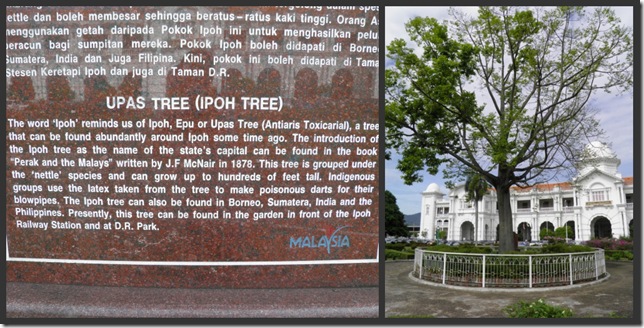 Somewhat surprisingly, the 132 year old book mentioned on the plaque, ‘Perak and the Malays’, is still in stock on Amazon’s website in case you want to get hold of a copy.

Right across the street from the station are two other splendid colonial piles, The Town Hall and Old Post Office building and the High Court. The Town Hall was designed by, yes, our old friend A B Hubback. I believe this still serves as the City Hall although there is some renovation going on at present. 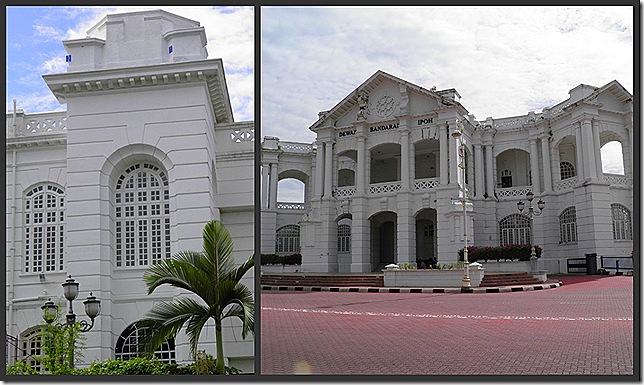 The High Court appears to be one the larger employers in town as every other office seems to belong to a lawyer. 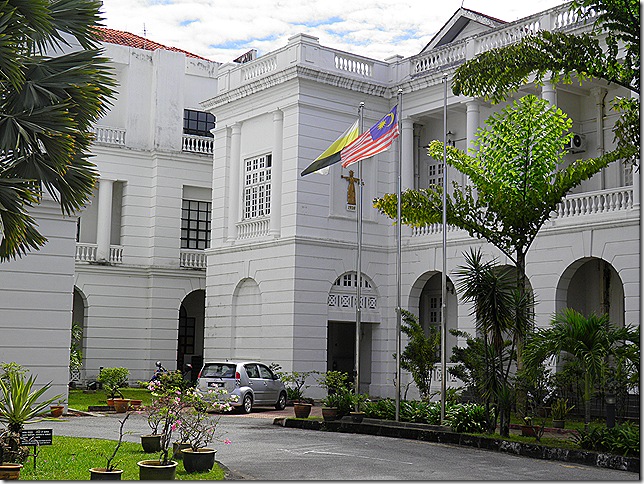 Just behind the Town hall is a clock tower memorial to J W W Birch, the first British Resident of Perak. By all accounts he was rather lacking in inter-personal skills and his bull-in-a-china-shop approach did not win admirers among his Malay hosts. Eventually he was stabbed to death in a riverside bath-house in 1875. 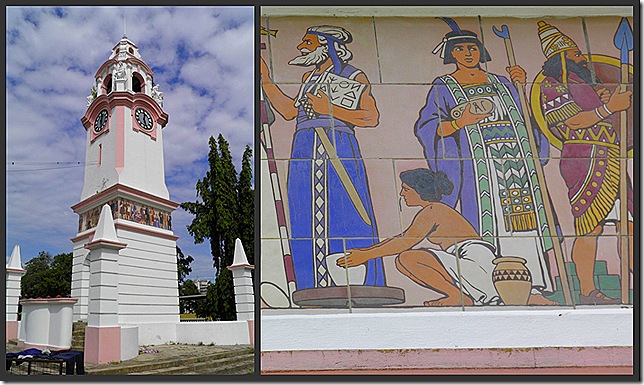 A number of the suspected instigators of this assassination were hanged including one of the chiefs, Maharajah Lela. However, the Malaysians have since got their own back by naming a street after him, just down the road from the Birch Memorial. 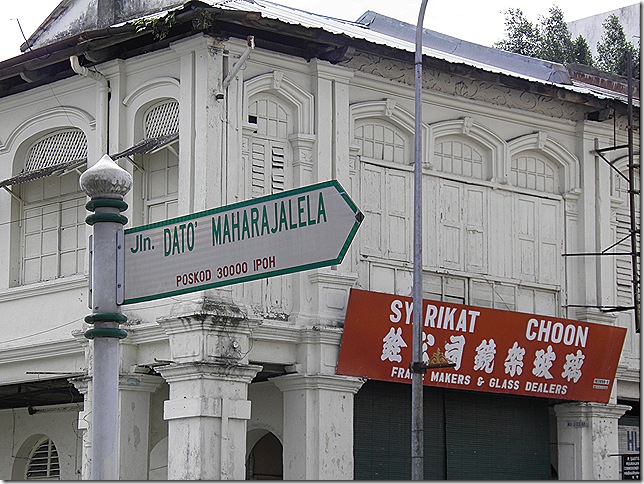 By this time I was really thirsty from traipsing round in the midday Malaysian heat. There must be somewhere around here to get a drink! Ah, this place looks promising. 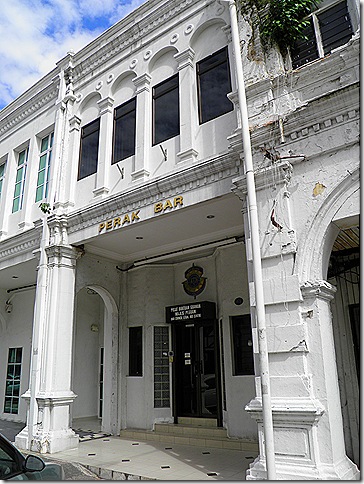 But no, it’s not that kind of bar. This one is the legal kind.

Pressing on, I passed a slightly unusual tourist attraction – a multi-storey car park. It was the first one to be built in Malaysia, in 1960. It looks rather quaint and I could imagine the little Austin A40s and Morris Oxfords that used to struggle up its narrow ramp. Parking is free. 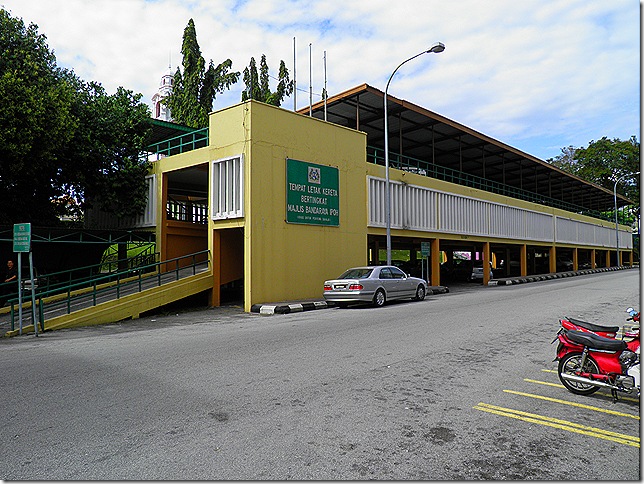 Next I passed another of those bastions of colonial life for the British in Asia, the Club. This mock Tudor building occupies a prime spot overlooking the padang. No doubt the Royal Ipoh Club still includes many of the city’s elite among its members but it is open to non-members too and reasonably priced accommodation is available for those looking for an alternative to a hotel. 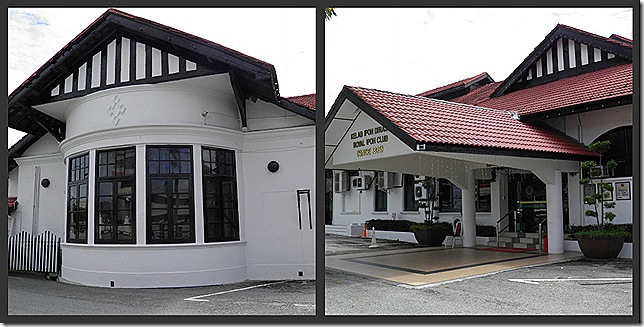 Continuing up Jalan Panglima Bukit Gantang Wahab (formerly Club Road) you reach St. John’s Church which dates back to 1912. A fairly plain looking exterior and simple whitewashed interior, you could think you were in England. Only the ceiling fans give a clue that this is the tropics. The church apparently served as a noodle factory for the Japanese occupiers during WWII. 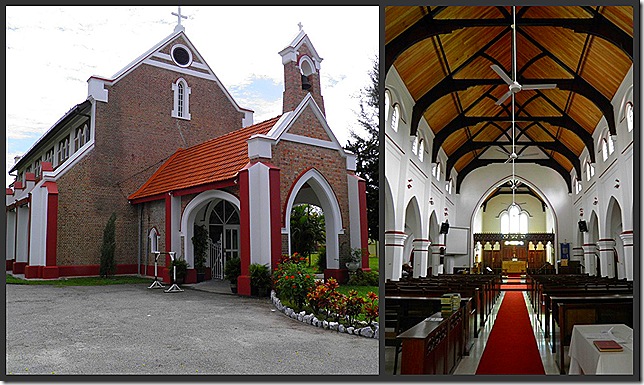 Another sweaty five minute walk brought me to the small Darul Ridzuan Museum. Nothing much to right home about. A mixed bag of exhibits covering history, local industries, flora and fauna and so on. Downstairs the showcase explanations were written in Bahasa only so not very informative for foreign visitors. At least entrance was free and the place was air-conditioned and a welcome respite from the blazing heat outside. 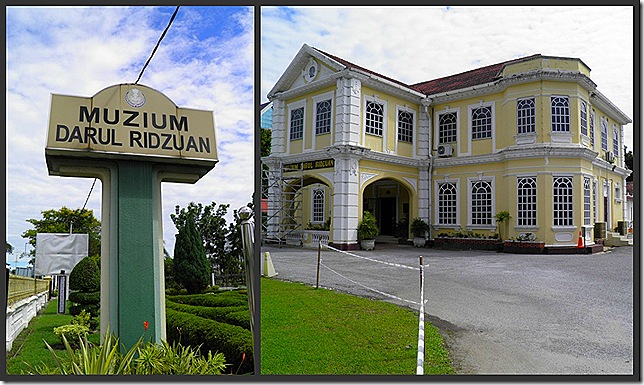 Now I was hungry and thirsty.  I was looking forward to reaching the F.M.S. Bar & Restaurant, said to be the oldest restaurant in Malaysia, housed in a building which makes even KL’s famous old Coliseum Restaurant look modern. Passing the impressive St. Michael’s School on the way, I cut across the grass of the padang only to find that the F.M.S. was undergoing some serious renovation and clearly would not be serving lunch for some time. 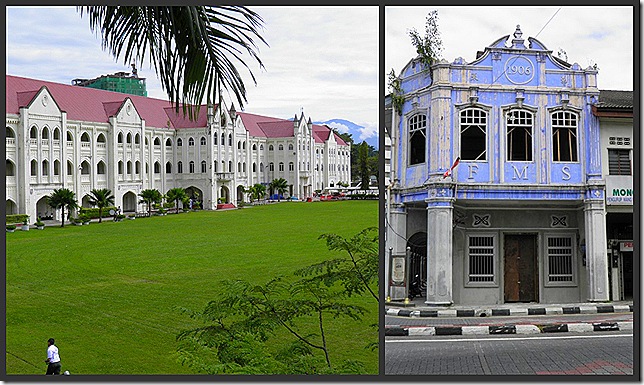 Finding myself in the financial heart of Ipoh, I was pleased to see some grand old bank buildings in fine condition. Top of the pile of course is the imposing Hongkong and Shanghai Bank building, built in 1931. The original banking hall has been substantially altered (vandalized?) to make way for automated banking terminals and such like but I suppose we should be grateful that the exterior has remained intact. The Bank is not known for putting sentimentality about its buildings ahead of shareholders’ returns.

The former HSBC subsidiary, Mercantile Bank’s Ipoh branch building is also in pristine condition although it is now occupied by a beauty products retailer. This building is the same age as HSBC’s but was built in more of an Art Deco style. 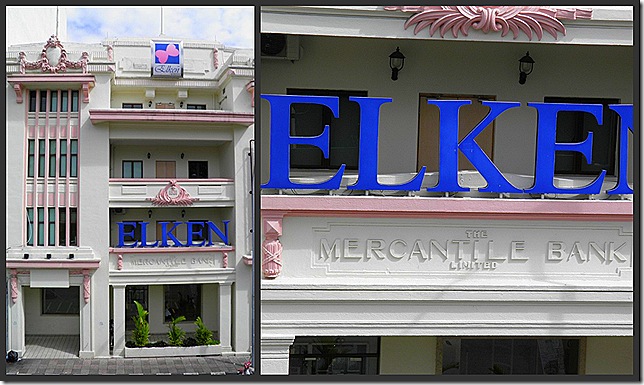 Across the street,  Chartered Bank’s old office building, which was completed in 1924, is still in use by Standard Chartered and looking good. 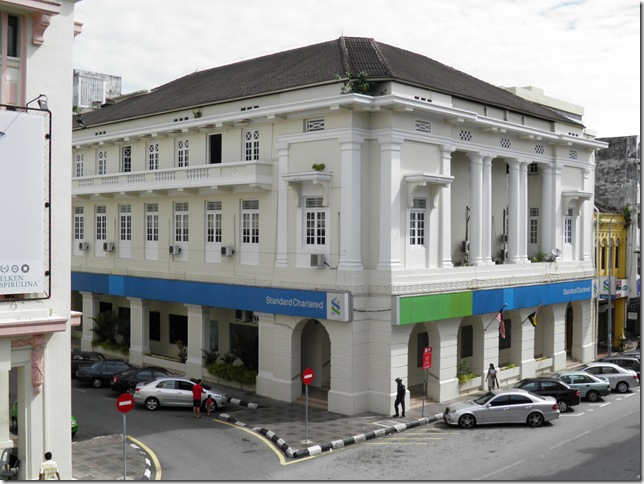 Facing Stan Chart is the headquarters of the former Straits Trading, built in 1907. This company used to buy up locally mined tin ore and sell it internationally. It was the boom in tin mining that powered Ipoh’s rapid growth and prosperity around the beginning of the 20th century. The Straits Trading Building is now occupied by OCBC Bank. 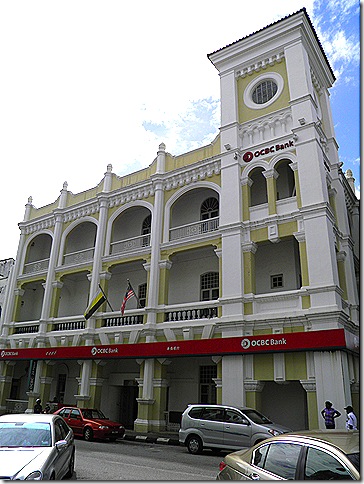 With all these banks around you would think that the National Union of Bank Employees would be more busy. 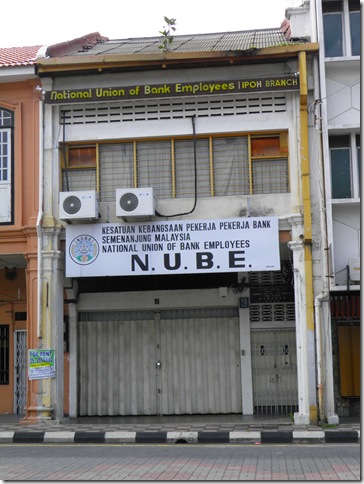 By now I was dying of thirst and hunger. See how I got on in Part 2 of the Heritage Walk.