There is growing acceptance that the proposed Two State Solution to the Israeli-Palestinian problem is not going to happen. Why? Because the patchwork of territories which the Israelis are willing to let the Palestinians control for their mini-state is too fragmented and too small to form the basis of a viable nation. And the chances of finding a way to divide or share Jerusalem in a way acceptable to both parties are nil, because the Israelis are determined to hang on to all of it.

If the Two State Solution is dead, what are the alternatives?

Some Israelis, perhaps including the current government, seem to be content with the status quo – terrorist incidents on Israeli soil are greatly reduced and rocket attacks have so far been ineffective and responded to with swift and deadly retaliation. However most Israelis must recognise that Israel can never enjoy true peace and security while it is surrounded by a seething sea of Arab resentment and hostility.

The only of achieving lasting peace is to go for a One State Solution. It will require painful compromises on both sides and much swallowing of pride but is the only way forward.

You can read all the arguments for and against on Wikipedia if you are interested so there is no point to repeat them here. My prediction is that it will happen eventually. When it does, the new Israeli-Palestinian state will need a new flag which more appropriately represents its population. Here is my suggestion (artwork needs improving but you can get the idea): 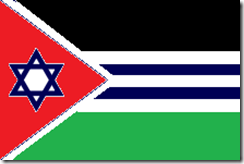