Earlier this year Singapore was named as the world’s most expensive city by the Economist Intelligence Unit. Prices in the island state seem particularly expensive when compared to neighbouring Malaysia, where the cost of living is said to be less than half that of Singapore.

Recently I was planning a brief trip to Singapore with my son and I was keen to avoid forking out for a Singapore hotel where the average room rates are around SGD260 per night (MYR665). This compares to KL where rates average around MYR275 per night. Of course it is possible to find cheap accommodation in Singapore but this usually involves sharing a dorm with a dozen or so unwashed strangers and various species of insect life.

I decided instead to stay overnight at the Seri Malaysia Hotel in Johor Bahru and travel from there into Singapore for a day trip.  The rate for a double was MYR150 including breakfast for two. It was far from luxurious but served the purpose.

I chose this hotel because it is located a short walk from Larkin Bus Terminal from where buses depart to Singapore’s Queen Street Terminal. I thought I would park my car securely and free of charge in the hotel’s car park. This plan failed because the hotel’s parking spaces were full and I had to leave the car in the street outside. Also it was not essential to catch the bus at Larkin – I could just have easily caught it at JB Sentral.

I opted for the Singapore-Johore Express Bus since this is a non-stop service and goes all the way to Queen Street which is located in the heart of the city and within walking distance of many of Singapore’s top attractions. The fare was a very reasonable RM2.40 (Larkin/Queen Street) and a more expensive SGD2.40 on the return journey. 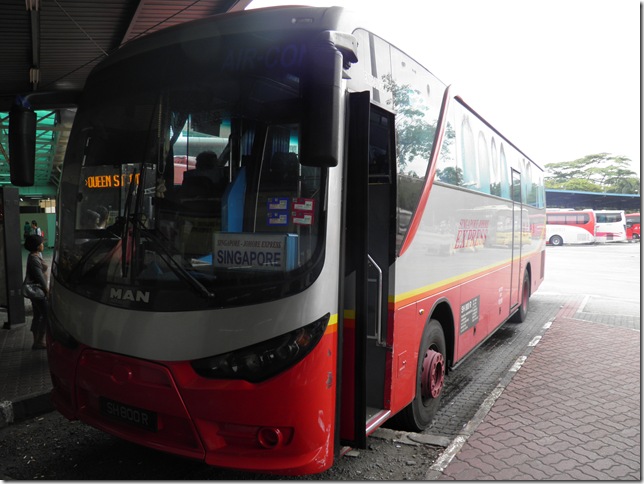 Malaysian and Singaporean residents with the appropriate automated clearance system identity cards can use the e-gates at both the Singaporean and Malaysian immigration counters for swift entry but foreigners like me have to queue up and get their passports stamped. Worse, at the Singaporean end, it is necessary to complete an arrivals and departures card and if you don’t have a pen you’ll be delayed further. The bus driver does not hang around for people who are slow at clearing immigration and in our case the bus had already left when we arrived back down at the bus stop. This is normal. We just waited for the next bus (15 – 20 minutes).

While it was quite interesting to experience this international bus trip once it was a bit of a pain in the neck to have to repeat it all over again when we returned to Malaysia in the evening. I have sympathy for those Malaysians living in JB but working in Singapore who have to do this commute every day. But at least they are earning Singaporean salaries.

Tip: Do not try this trip with baggage. There is no space for baggage on the bus and you would have to lug all the bags with you when clearing immigration and customs (twice).