One of the lesser known sights in Melaka is a tiny Japanese cemetery located in the Bukit Baru district of the city.

It is seldom visited except by members of the small Japanese community in Melaka and travellers from further afield, mostly Japanese.  In fact nobody remembered it was there until 1969 when a Malay villager rediscovered it while clearing an overgrown patch of land in front of his house. Since then, a Japanese company in Melaka has been appointed to look after it and it has been cleared of vegetation and tidily maintained.

I became aware of its existence thanks to an excellent book called Lost Chapters of Malacca by Ou Young San.

There are only 36 graves in the cemetery. It is not a war cemetery – only one of the graves dates from the Japanese occupation in WWII – an officer who committed seppuku in 1944. All the other graves are older, dating from 1911 up to 1941. Of the 36 graves, 22 were female (including 4 infant girls), 11 were male (including 1 two year old boy), 2 graves have no headstone and there is one dog. 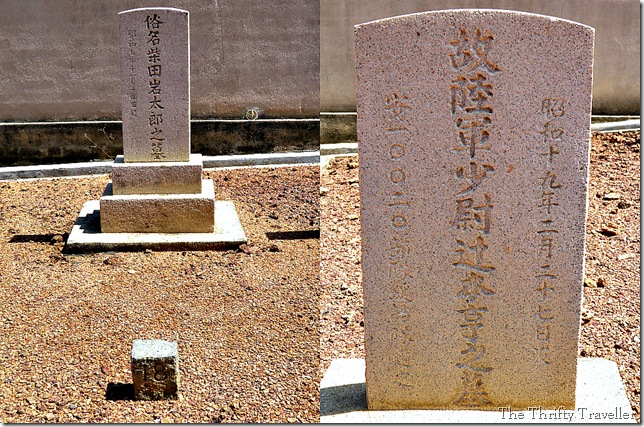 Who were these people? Malacca has always been an important trading port so it is not surprising that there should have been a few Japanese there. Perhaps, as in many other Malayan cities at the time, Japanese were running small businesses such as barber shops and photo studio (and doing a bit of spying in the lead up to the War). As for the women, eight of them died young aged between 24 and 35. Five of them originated from Amakusa-gun in Kyushu. In the book (also a film) Sandakan Brothel #8, the author Tomoko Yamazaki tells the true story of a ten year old girl from Amakusa who, in the early 20th Century, was sold by her impoverished parents and later became a  karayuki –san, a prostitute, in Sandakan, North Borneo. The export of Japan’s low class girls to brothels all over east Asia was very common in the 1910’s and 1920’s and although I have so far found no accounts of any Japanese brothels in Melaka, it seems possible that these poor women buried here might have been sex workers and died young from various diseases.

As for the dog, the words carved in English appear to read ‘Emden No Haka’ meaning Emden’s grave (though it could be Emoen). Emden is not, as far as I know, a Japanese name. Perhaps this pet’s owner named him after the German light cruiser Emden! 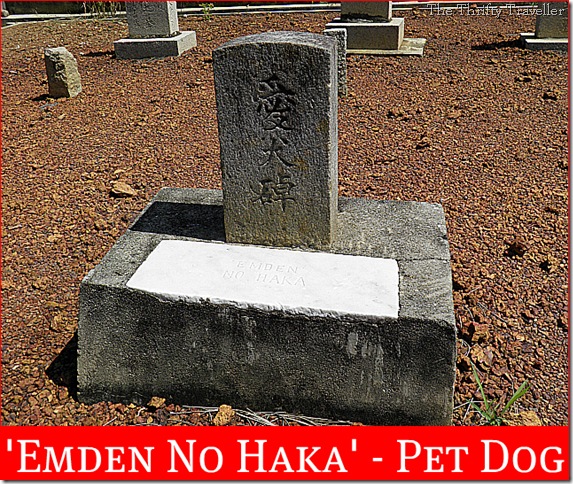 Although this burial ground is being well looked after, its appearance is rather austere and lonely and it’s a long way from home. The cemetery is in a strange location, on the edge of an ordinary residential neighbourhood. Perhaps the Japanese Government should arrange to have the remains shipped home to Japan but, if those women were really in the ‘water trade’, their relatives would probably not want them back. So I suppose they will stay where they are and continue to be one of Melaka’s more unusual tourist attractions.