Now that international sanctions against Iran have been lifted, intrepid travellers might start visiting the country in increasing numbers. For those with an interest in Persian carpets, the Carpet Museum of Iran is the place to go with an extensive collection of rare and unusual carpets, including some which were transferred from the Saad Abad Palaces following the overthrow of the Shah of Iran.

Here are a few of my favourites:

This 19th century Isfahan cotton and wool carpet has a rare zodiac design with signs for the years in the inner circle and the months in the outer. The year signs have some similarity with Chinese zodiac signs but the museum says these are taken from the ancient Nazarene culture. The names of the months and years are woven in Persian, Arabic and Turkish.

The upper woman’s face motif represents the sun while the lower star shaped motif symbolises the moon. The four corner portraits in human form represent the planets Jupiter, Venus, Mars and Mercury. The name of the carpet weaving workshop of Mohammed Taghi Banki is inscribed in the two cartouches in the upper corners. 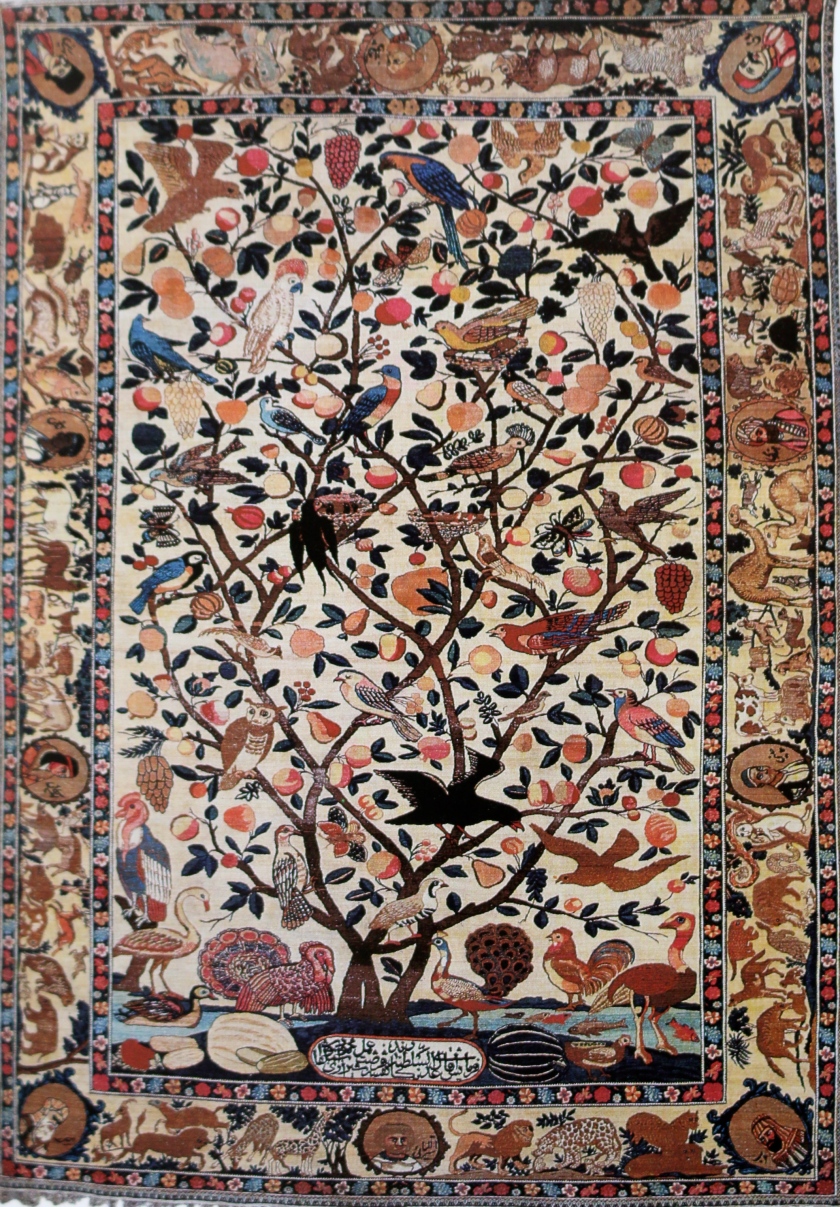 This unique early 20th century Kerman carpet is named ‘The Nation’. On the branches of the tree there are typical Iranian fruits such as apples, pears, pomegranates and grapes, together with different birds including a parrot, swallow, hoopoe, owl, peacock, ostrich, turkey, duck and goose. The river at the foot of the tree contains various fish while the border portrays the animal kingdom and even insects such as a beetle and scorpion.

The ten circles in the main border are meant to show the ten nations or races in the world, namely: ’Roman, Indian, Chinese, Arab, Australian, Turk, American, Black, Iranian and European’. The level of detail in a carpet only 287x176cm is very impressive.

Some of the carpets on display were presumably made for foreign markets such as this late 19th century Kerman pictorial carpet. Here Bacchus/Dionysus (the God of Wine) is playing music for an immodestly dressed dancing woman surrounded by angels – an image which would probably be frowned upon in modern-day Iran. The border shows portraits of a western woman alternating with an Armenian Qajar period woman. 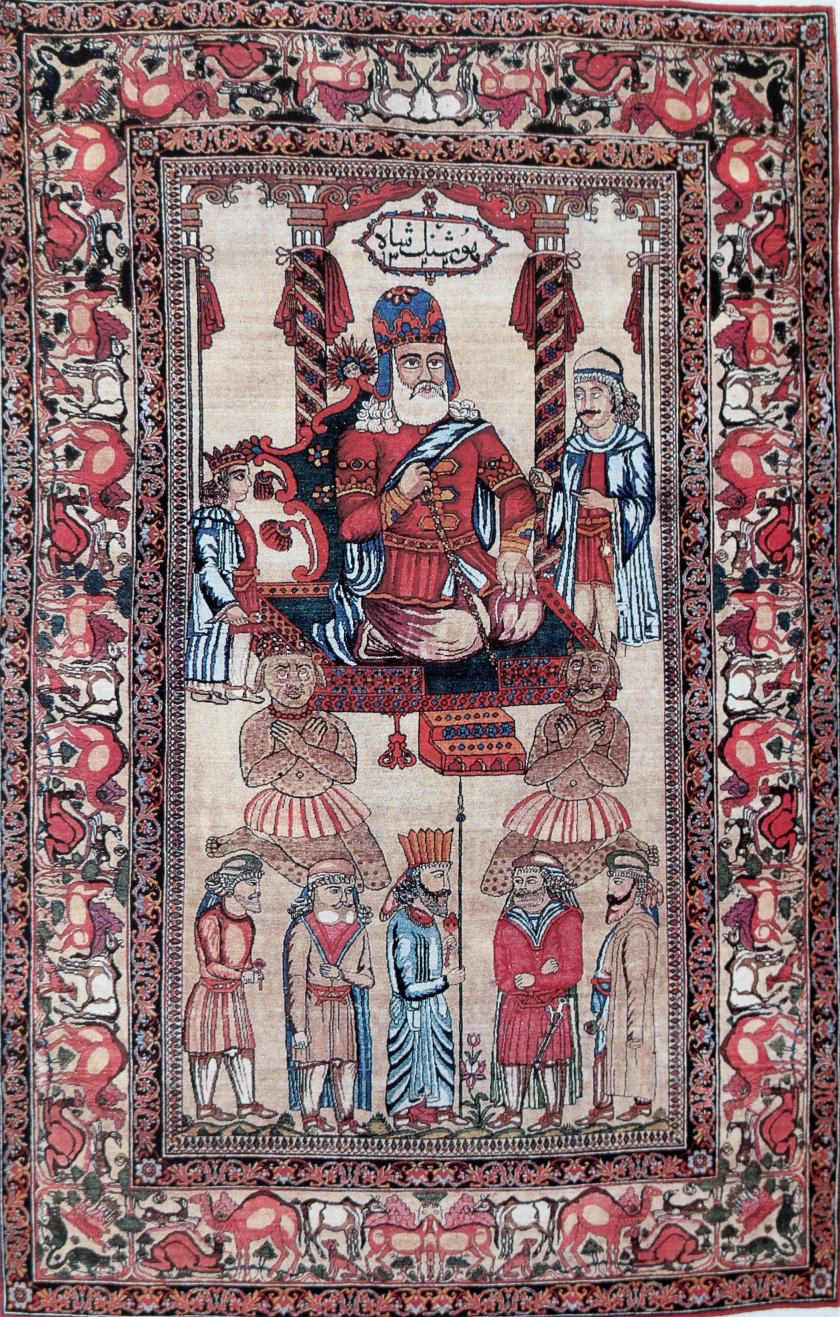 This Kerman rug from 1904 portrays King Hushang, the founder of the Pishdadi Dynasty and said to have laid the foundation of civilisation in Iran long long ago. He is depicted on a throne studded with gems carried on the shoulders of demons.

One of the more intricate designs is this 19th century Isfahan landscaped prayer-niche carpet known as the ‘Gate of Heaven’. The weaver has created his vision of paradise as promised in the Quran and filled the view with delicious fruits such as grapes, pomegranates, apples and figs together with birds and flowers, a flowing river and turquoise blue sky. The weaver pays no regard to perspective in typical Persian style. 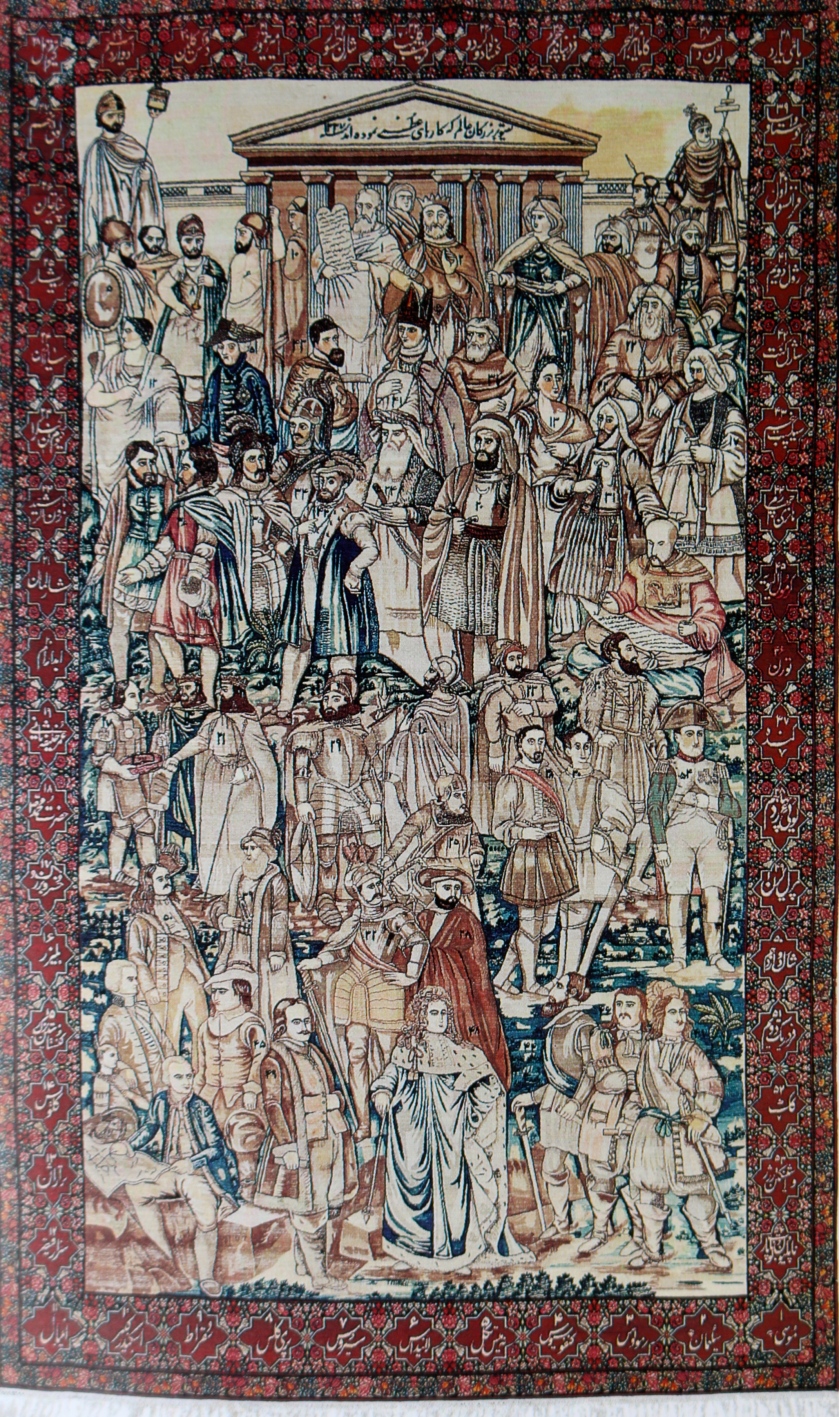 This interesting Kermani carpet from 1919 is called ‘Sultans and Celebrities’ and portrays 54 prophets, sultans and famous men including Solomon, Moses, Confucius, George Washington and Napoleon. Each character is marked with a number and the border of the carpet provides the name for each number. The inscription on the Roman portico translates as ‘The pictures of the celebrities of the world who have done great things, year 1337AH’ (1919).

This final carpet is not part of the Carpet Museum of Iran collection. It was made for the Imperial Bank of Persia (an ancestor organization of my former employer) patterned on a 100 Toman note payable at the Tabriz office. It appears to be signed so it could perhaps be considered legal tender and cashable but since 100 Toman is equivalent to 1,000 Iranian Rials (3 US cents) it is probably better to hang on to the carpet.

If you want to know more about the Carpet Museum, including the location, opening hours and ticket price, you can refer to their official website.