We have a few pineapple plants in our garden. Just when I think the fruits are looking ripe enough to pick they have a habit of disappearing and I find small shreds of chewed up pineapple on the ground. This monitor lizard could be responsible. About a metre long, this is a mid-sized reptile by Malaysian standards. 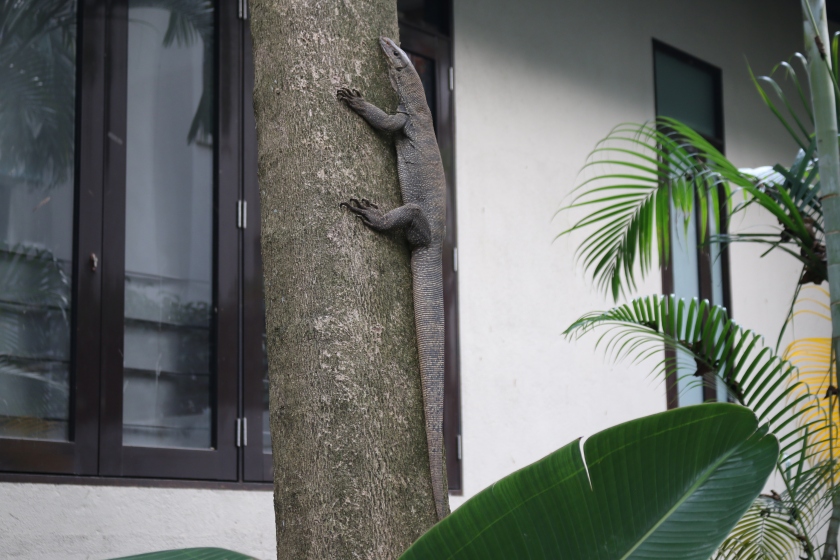 Today my dog chased him (or her) up a tree. He stayed up there for at least half an hour  until he was sure the coast was clear. I suppose he was just ‘monitoring’ the situation.

Putrajaya, the federal administrative capital of Malaysia and the place I call home, is a green town. Often described as a City in a Garden, around 40% of its 4500 hectare area has been set aside for parks and green spaces. Putrajaya has a population of around 70,000 (planned to increase to 330,000 eventually). During office hours the population surges to 100,000 or so as hordes of civil servants commute into the city from outlying areas. At weekends though the streets are fairly empty and the parks are completely deserted. I don’t know where the 70,000 residents go at weekends – perhaps to the malls – but it seems they are not keen on walking which is a pity because Putrajaya’s parks are very beautiful. Last Saturday I took a circular walk lasting 4 hours which included four of Putrajaya’s many parks. I had the place to myself as usual.

This park lies in the heart of Putrajaya on a low hill affording fine views over the city. At the highest point sits the Istana Melawati, a royal retreat for the King and the second-ranked national palace after Istana Negara in Kuala Lumpur. The Shangri-La Hotel is located next door. 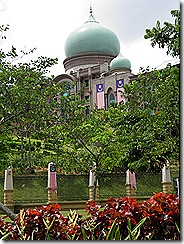 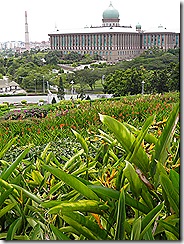 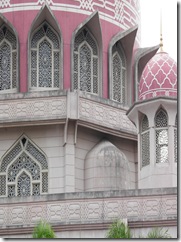 Crossing the Putra Bridge on Putrajaya’s main thoroughfare I was able to stand in the middle of the road to take this photo without fear of being struck by traffic.

A happy couple in traditional costumes was posing for wedding photos.

Leaving the road I entered the second park, Taman Wawasan. This park has plenty of picnic spots, gazebos, jogging tracks, cycle paths and even a pebble beach though I am not sure I would brave enough to swim in the lake having spotted some rather large lizards cruising around. 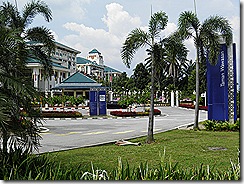 Nearby is the Agricultural Heritage Park which highlights the important role agriculture plays in Malaysia’s economy. This is the only park where you have to pay an entrance fee (cheap). The park contains rubber trees, oil palms, coffee, fruit and cocoa trees and has a demonstration of how rubber is produced.

At the entrance is an outdoor eating area including a branch of the famous Kajang Satay.

Close to the Agricultural Park is the start of the promenade which runs along the lake shoreline all the way back to the Putra Mosque via the Alamanda shopping mall. On some islands in the lake, isolated from humans, live colonies of egrets, night herons, grey herons, green herons, purple herons, cattle egrets, black crown neck herons, painted storks and cinnamon bitterns.

This group of painted storks seems oblivious to the threat posed by the large monitor lizard behind them. Judging by its fat tummy, perhaps it has already eaten. Or maybe its a female lizard about to lay eggs on the island and the storks are hanging around to dig up the eggs and eat them as soon as the lizard leaves. Who is the predator here?

For information on two more of Putrajaya’s lovely parks, Taman Wetlands and Botanical Gardens, you can take a look at my website http://www.malaysia-traveller.com/national-parks.html 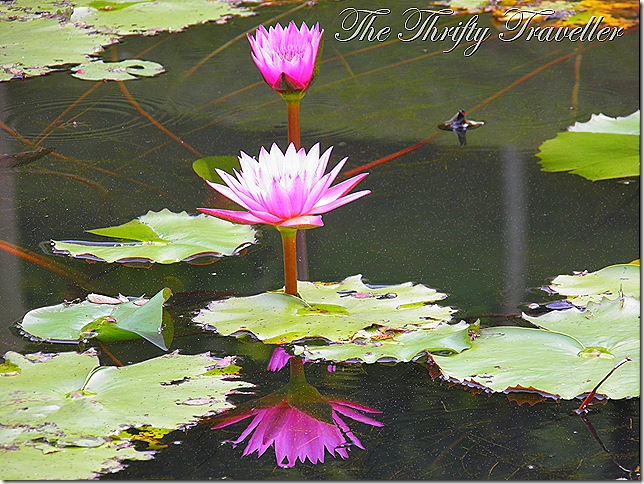