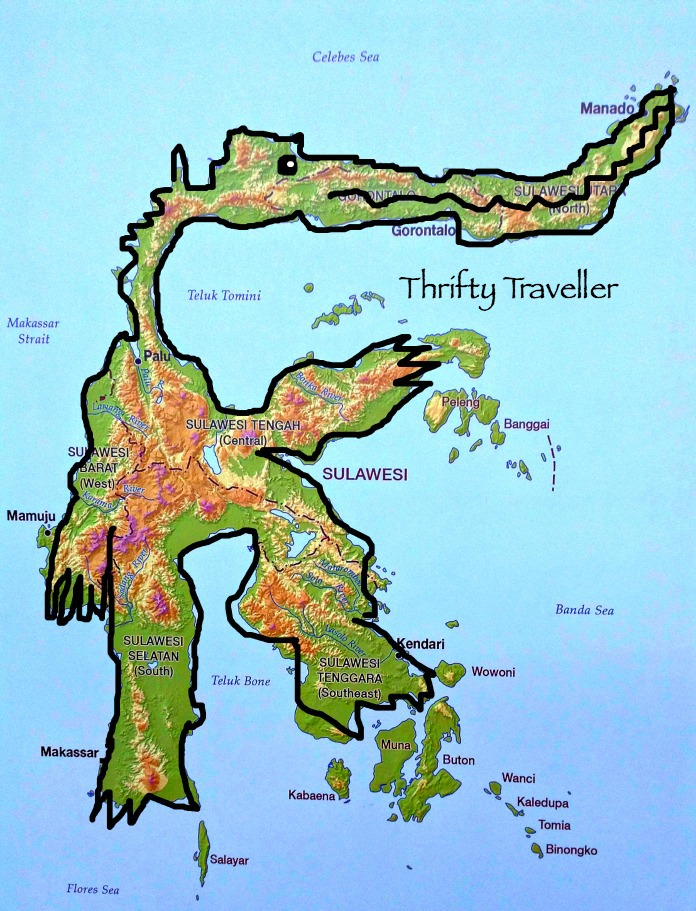 I had been wanting to visit Sulawesi for a long time. When I was at school, aged around 11, I remember our teacher asked everyone to write a non-fiction essay on any topic we liked. Most of my classmates wrote about their pets or favourite football teams. I wrote about Celebes, which is how Sulawesi used to be spelt. Partly my odd choice was driven by practicalities. I had access to the volume of Encyclopaedia Brittanica which included the letter C, so here was my source of information in those days before the internet. But I was also attracted to the strange shape that Celebes made on the map, like some deformed sea creature or crocodile. I was also curious about the photos of strange houses with upturned gables. It wasn’t a great essay and I was probably told off for plagiarism but since that time Sulawesi has been on my ‘must visit’ list.

Fifty years later, I finally made it to the southern Sulawesi city of Makassar and the surrounding area. I would have preferred to visit Manado in the more scenic north and the central highlands where the Toraja people have their upturned houses and unusual burial customs but they will have to wait for another day.

Makassar is not really a tourist destination. It is a major port and most foreign visitors are seamen but there are a few sights worth seeing. 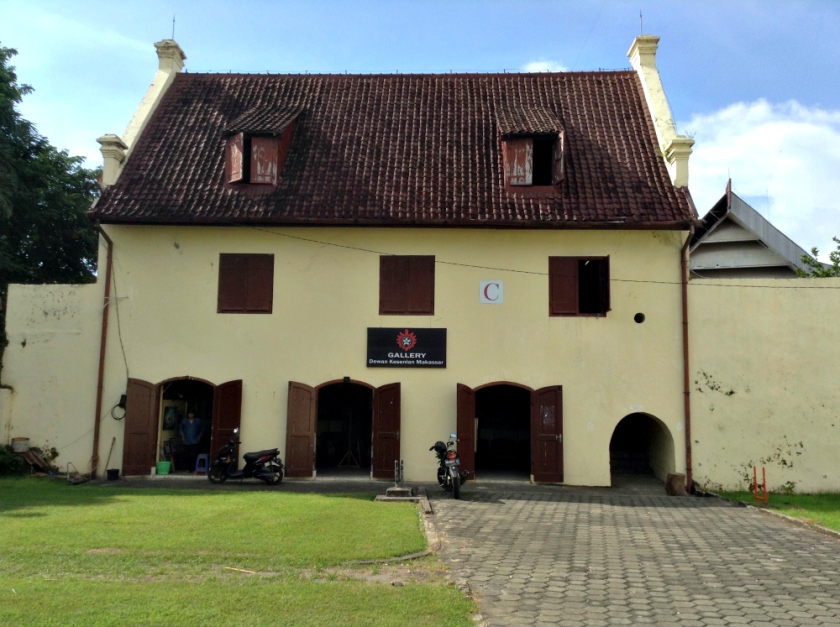 This Dutch-built fort sits in the heart of town. Behind its robust walls are a number of buildings which would look at home in Holland. One of them houses a museum called La Galigo, which sounds Iberian but is apparently named after an ancient book written in the local Bugis language. The fort has been well preserved but I felt that more could be done to turn it into a world class attraction. 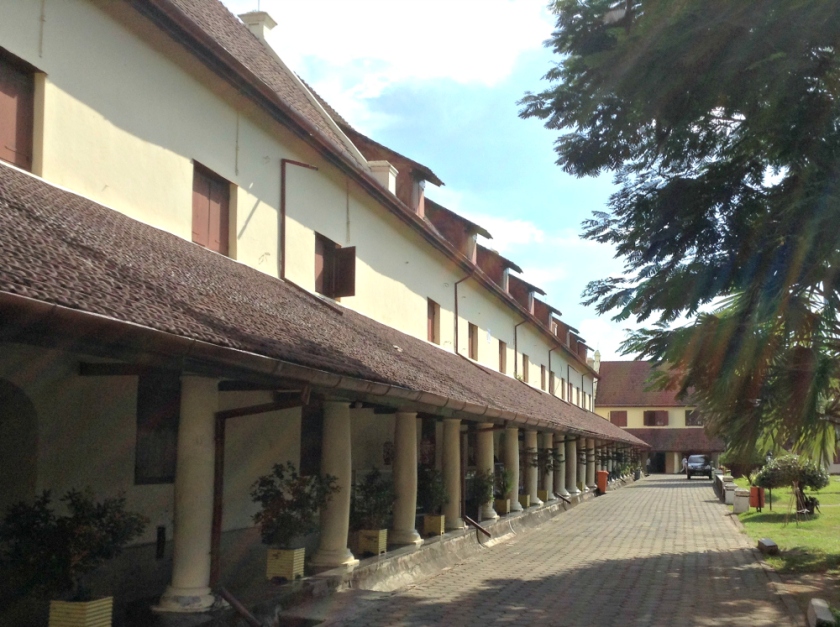 For me it was interesting to compare this Dutch East India Company fort with the English East India Company fort that I visited last year in Bengkulu. The English one looked more solid and better designed for defence but the Dutch one looked more comfortable for its occupants. Since disease was a bigger killer than invaders, the Dutch were probably right to concentrate on comfort and hygiene.

Makassar has seen enormous urban regeneration but a few buildings survive from colonial times including: 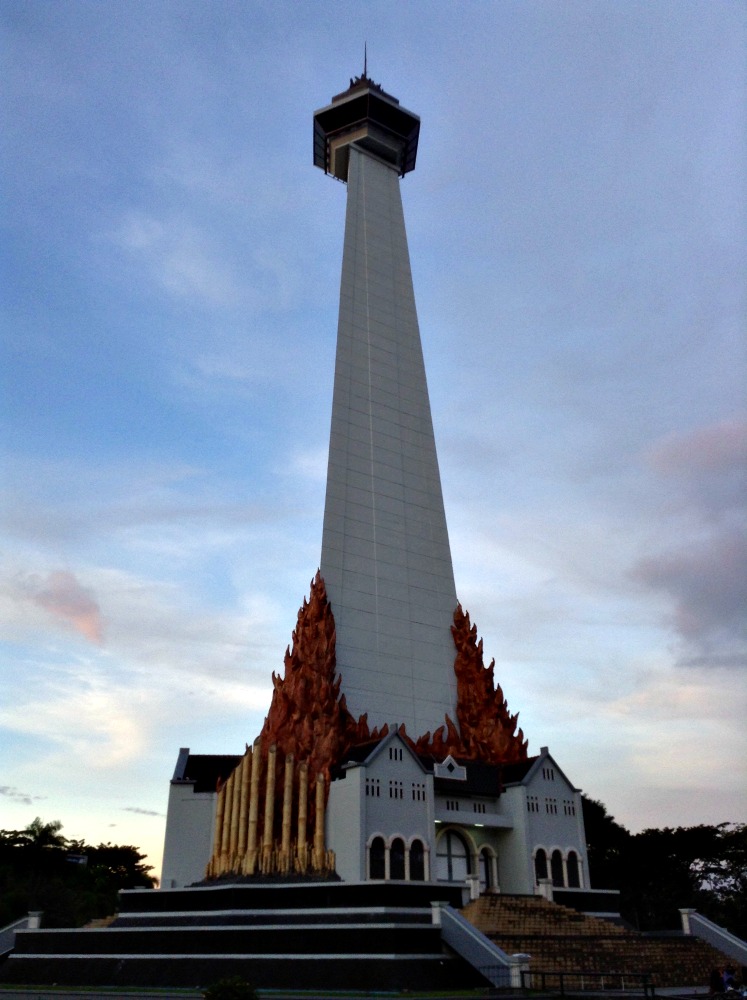 This striking monument commemorates the wresting of West Irian (Papua) from Dutch control in 1962 and its eventual integration into Indonesia.

There is no longer any actual beach on this stretch of waterfront in the centre of town but it is a popular place for locals to hang out, eat and watch the sunset. 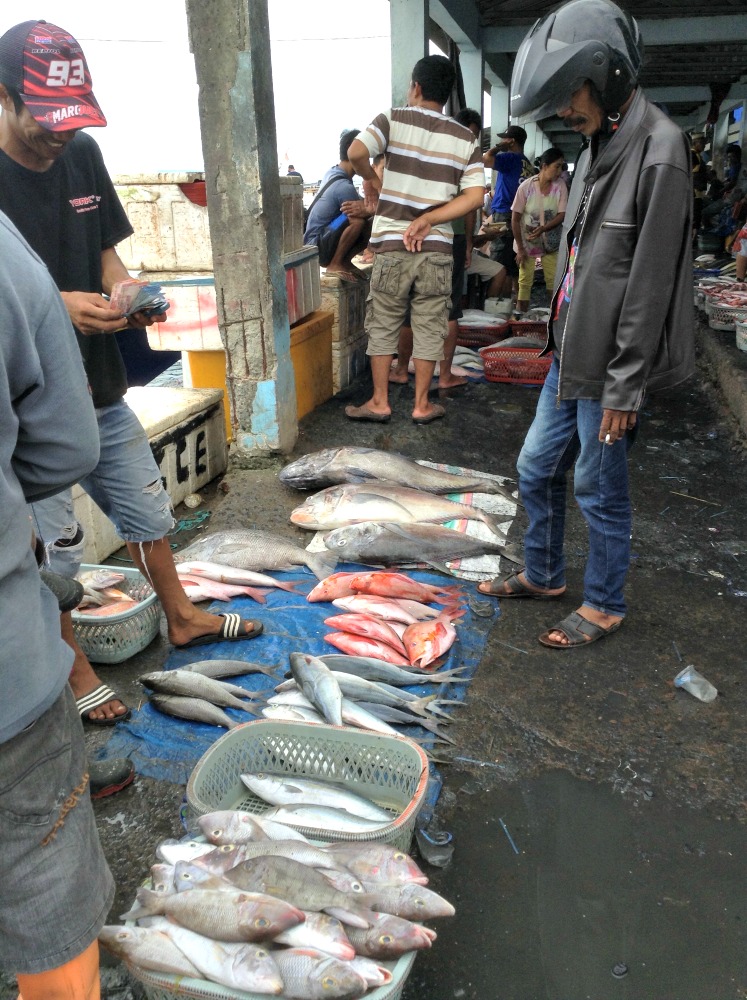 Like all fish markets in this part of the world, a tolerance for strong smells and gory sights is required to visit this colourful and lively place, especially the fish-gutting section which is enough to put anyone off becoming a pescetarian. Everybody who works here is covered in fish scales. 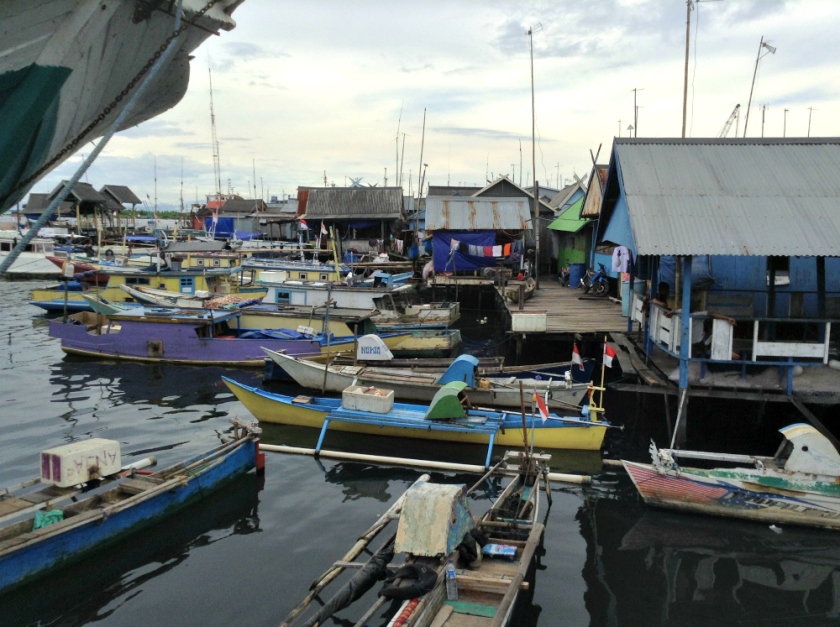 My trishaw driver told me that this is the best place in Indonesia to see traditional wooden Bugis sailing schooners (prahus) being loaded and unloaded, though I do remember going to a similar place in Jakarta many years ago. 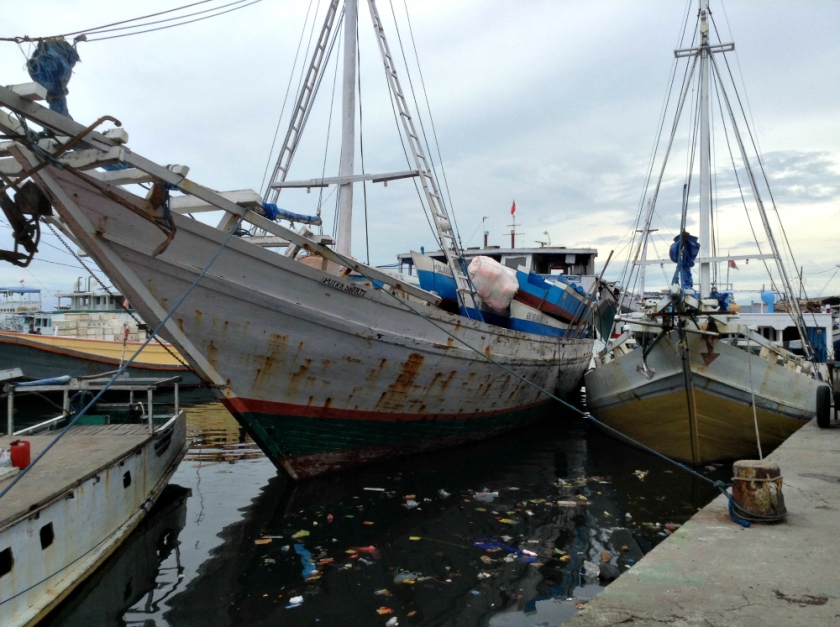 I was told these boats belong to people from Flores. 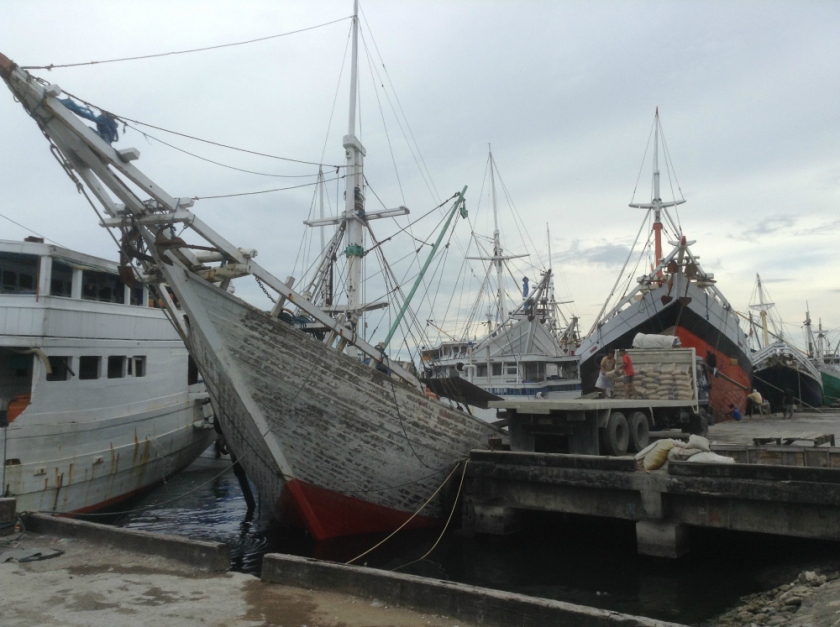 While these ones are the Sulawesi Bugis boats.

I passed a couple of street markets in Makassar. 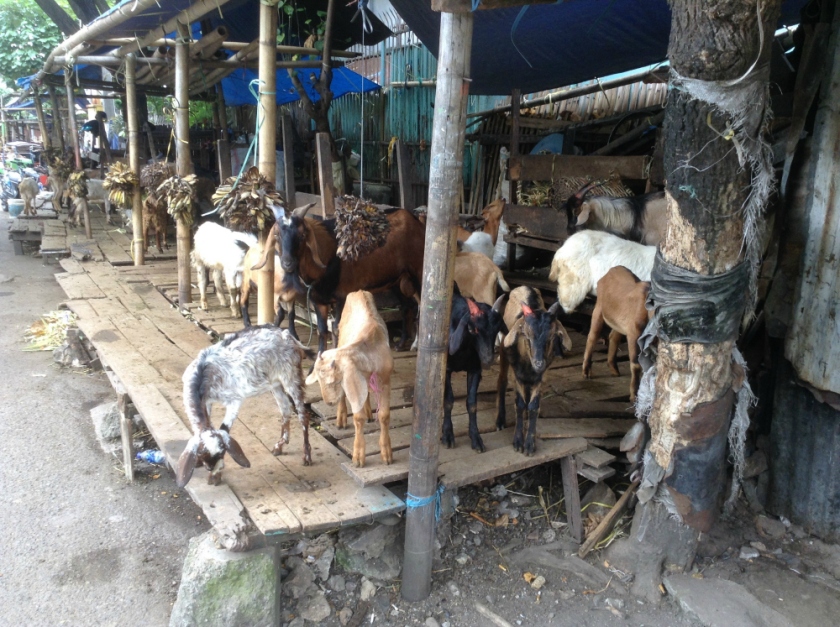 This street was lined with kambing stalls and even though the goats were not tethered they obediently stayed in their stalls, oblivious to the fate which awaits them, poor things. 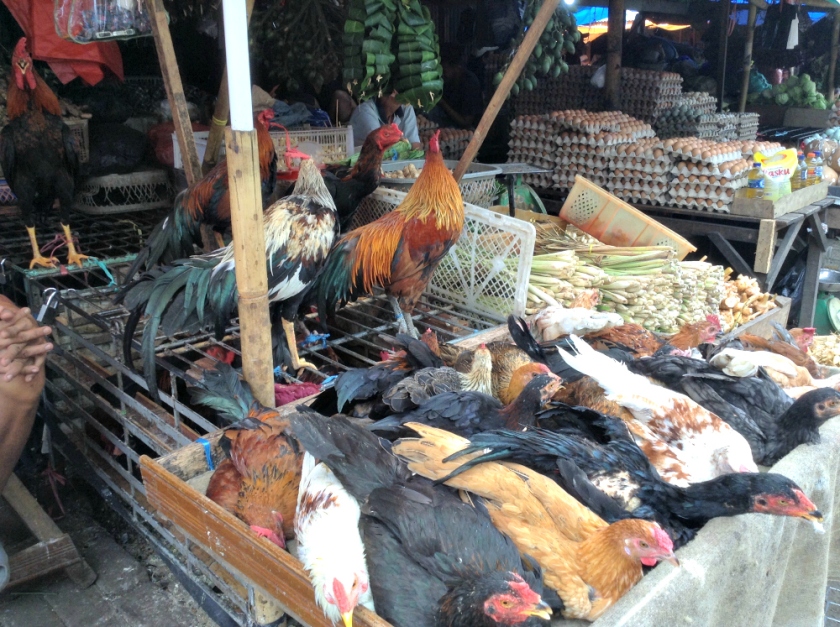 Similarly these chickens were patiently waiting to be bought. 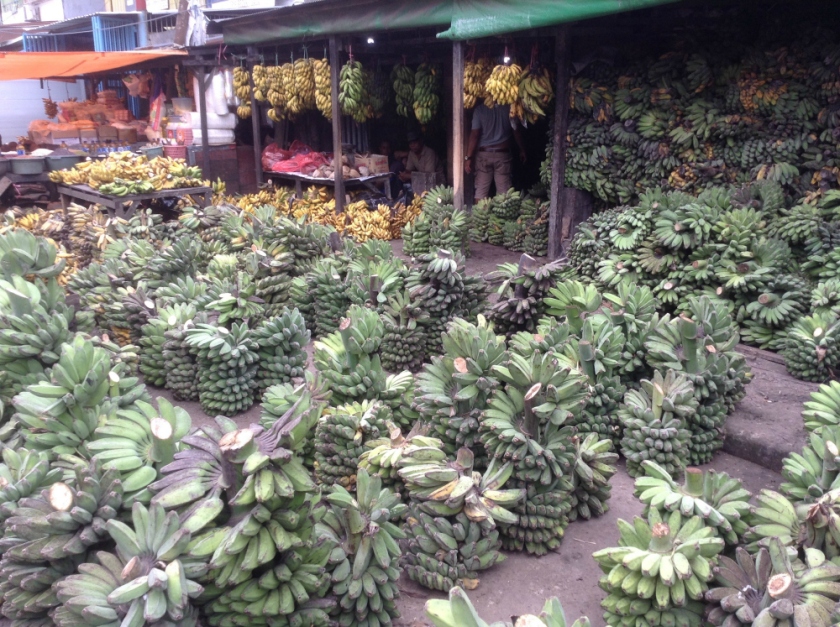 This banana vendor appeared to have enough stock to last for a while. 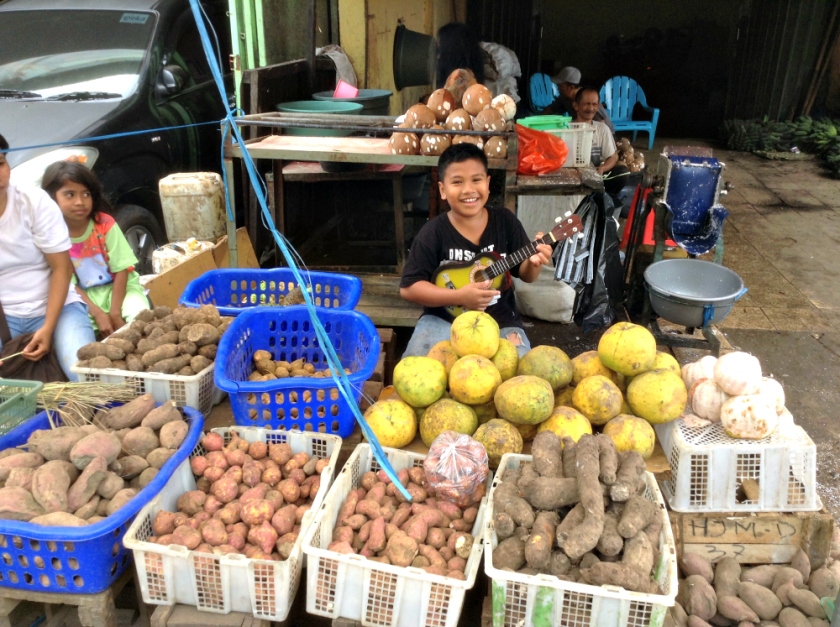 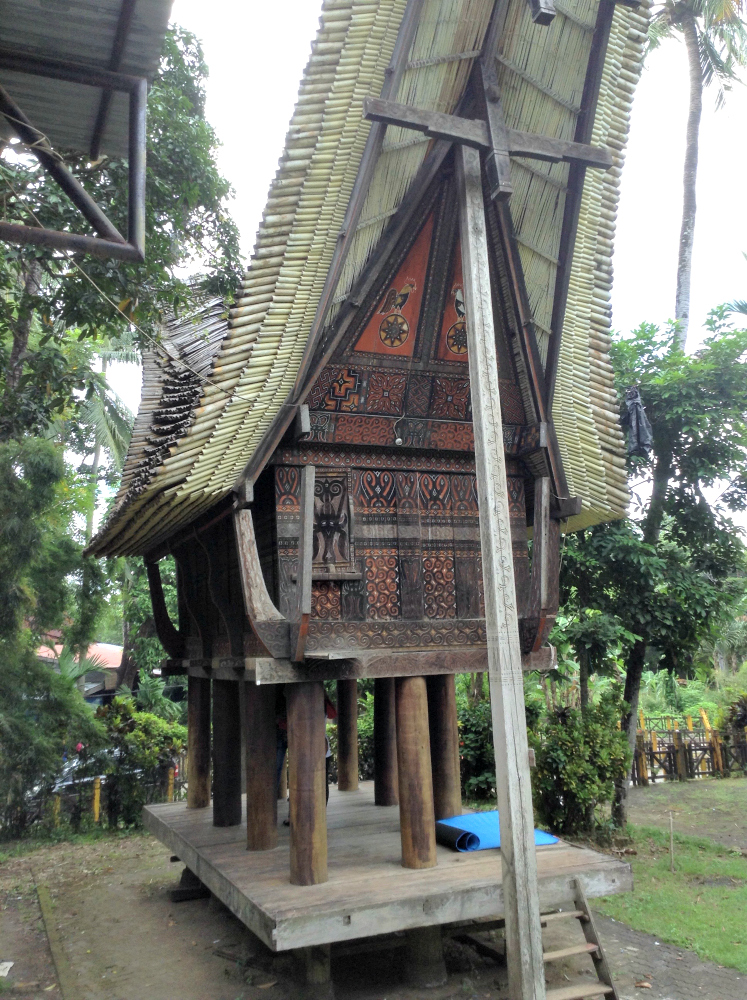 Since I did not have time to visit the Toraja Highlands the next best thing was Benteng Somba Opu on the outskirts of Makassar where they have examples of the amazing Tongkonan traditional houses with the curved boat-like roofs. 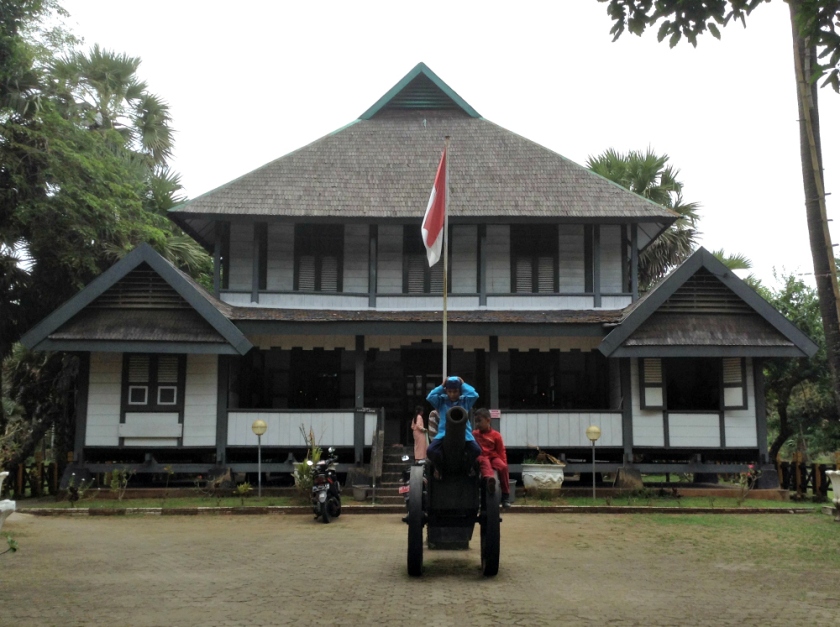 There are also replicas of other stilted houses here and a museum. 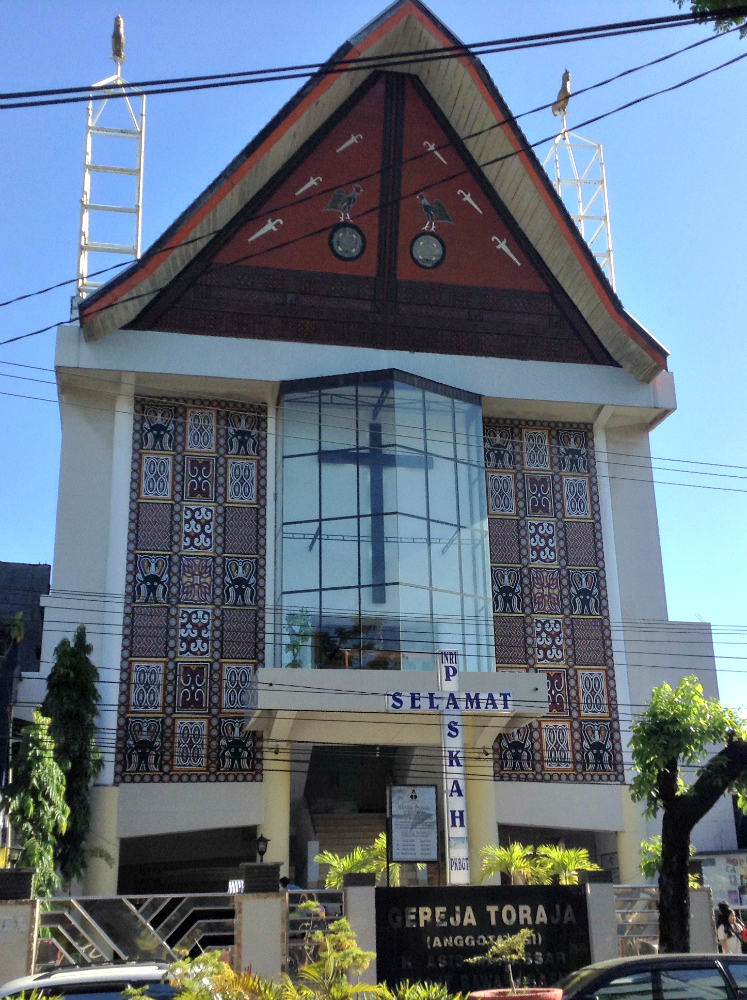 Talking of Toraja, I noticed this Toraja Church decorated with tribal motifs. The steel towers, instead of bearing crosses, appear to be topped with a couple of parrots. 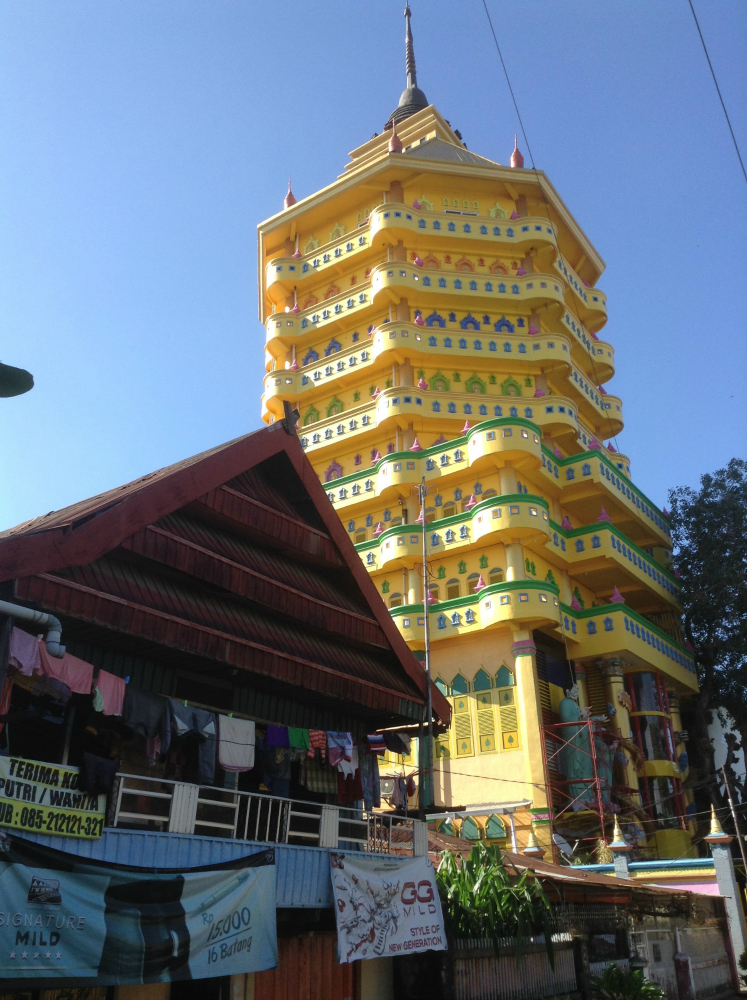 I noticed this yellow pagoda away in the distance from the roof of my hotel and set off on foot to find it. Forty minutes later I arrived, rather sweaty, just as a couple of volunteer staff were commencing their duties and they very kindly gave me a tour around. 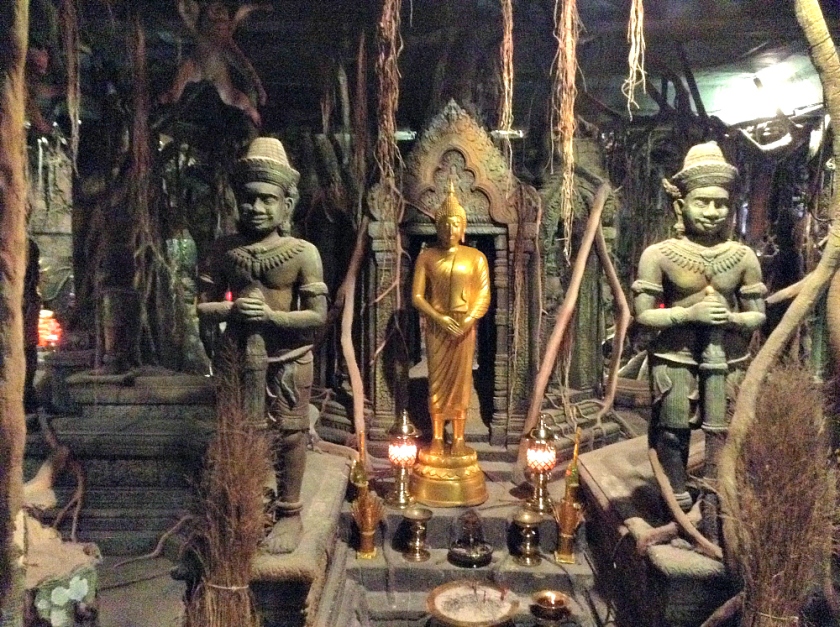 This Buddhist temple is not quite complete but it has amazing altars, murals and displays on each of the eight floors of the pagoda, including one floor with a mini Angkor Wat model, very beautifully done at considerable expense. 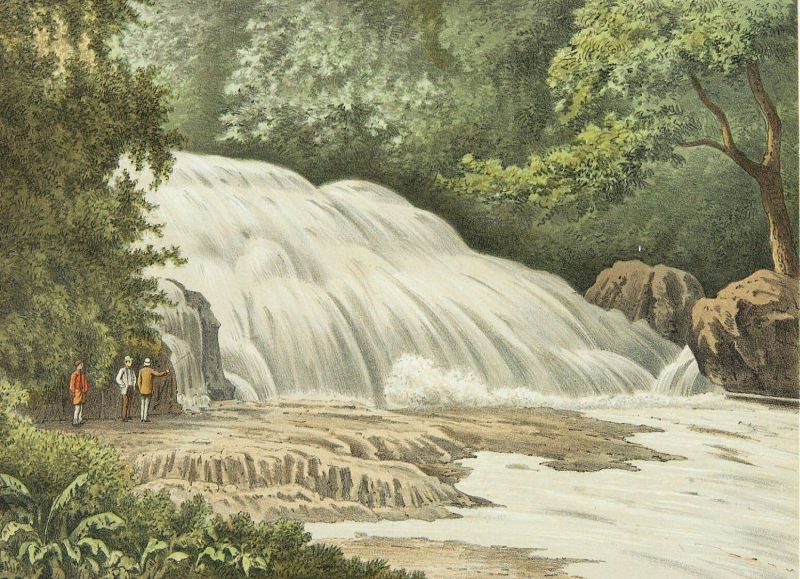 As mentioned in my last post, this national park is famed for its myriad butterflies. Other attractions include a couple of caves and a very lively waterfall.

I have marked all these places on this map, as accurately as possible, in case you would like to visit any of them.