Bukit Rotan is a village in a quiet corner of Selangor, on the outskirts of Kuala Selangor. It has never been famous for much apart from being home to the Royal Kampung Kuantan Golf and Country Club, which was built by British planters in 1910 and is the oldest golf club in Selangor and among the first in the country.

Now there is a new attraction in Bukit Rotan, a magnificent temple called the Sri Shakti Temple with finely sculpted stone walls and an intricately decorated 5 tier gopuram entrance tower. This must be one of the finest looking Hindu temples in Malaysia and may well become a leading tourist attraction as its fame spreads in years to come.

The temple took four years to build, apparently at a cost of RM12 million (which seems really good value when you consider a prime bungalow in central KL can go for that amount). Skilled craftsmen were brought in from India to work on the project. The temple was finally consecrated in May of this year. 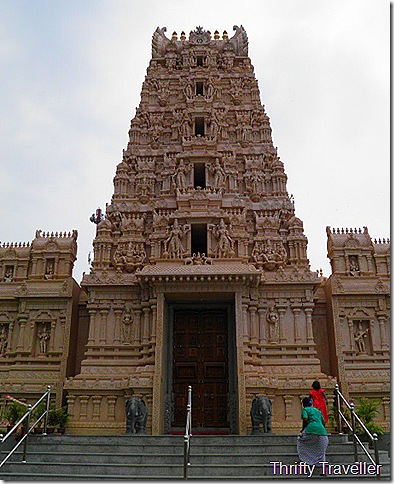 Among the many special features of the temple are 51 Shakti statues along the temple’s internal corridor.  These statues represent the 51 ‘Shakti Peedam’ (places of worship to the goddess Shakti) which are located at various sites over the Indian sub-continent.

According to Hindu mythology the goddess Shakti, who was consort to Lord Shiva, immolated herself. Shiva picked up the remains of her body and performed an angry dance cutting Shakti’s corpse and jewellery into pieces which fell to the ground at 51 places all over the sub-continent (44 in modern day India, 1 in Bangladesh, 3 in Nepal, 1 in Pakistan, 1 in Tibet and 1 in Sri Lanka).

Two Hindu sages visited all 51 of these holy sites and collected soil and chakra plates made of five metals and brought them back to be installed in this temple, which is the only place in the world where all 51 can be found in a single venue. 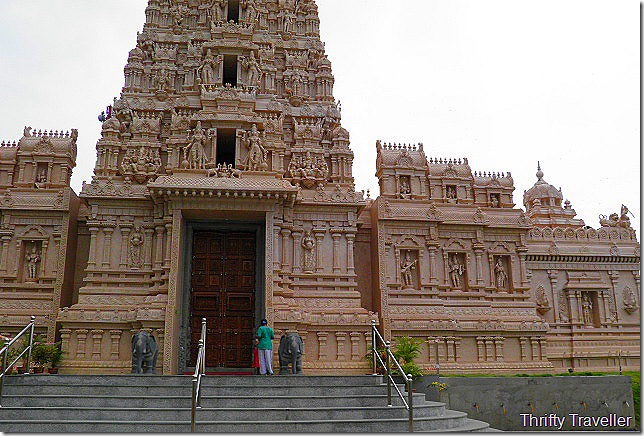 We didn’t get a chance to look inside as the entrance was locked during our visit. Perhaps another time.