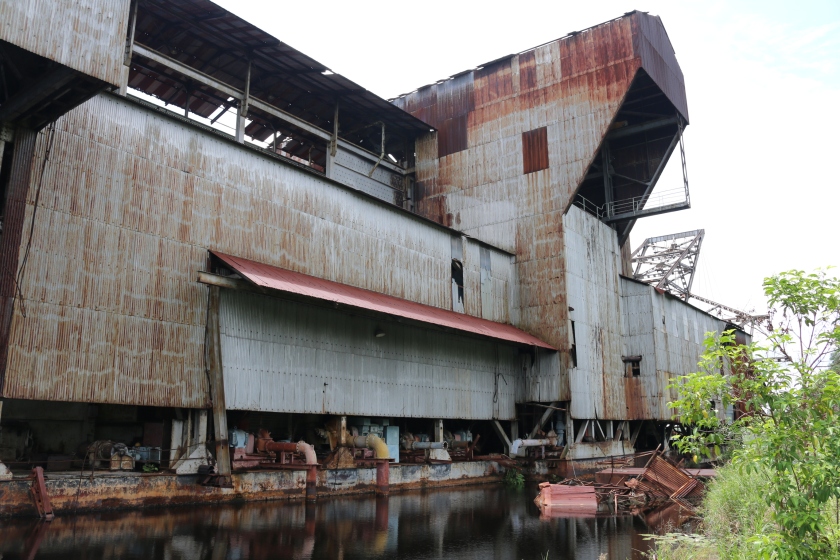 To my knowledge there are only two surviving bucketline tin dredges in Malaysia. One is the Tanjung Tualang Tin Dredge near Batu Gajah which I wrote about on this blog a few years ago. The other is located near Dengkil in Selangor. 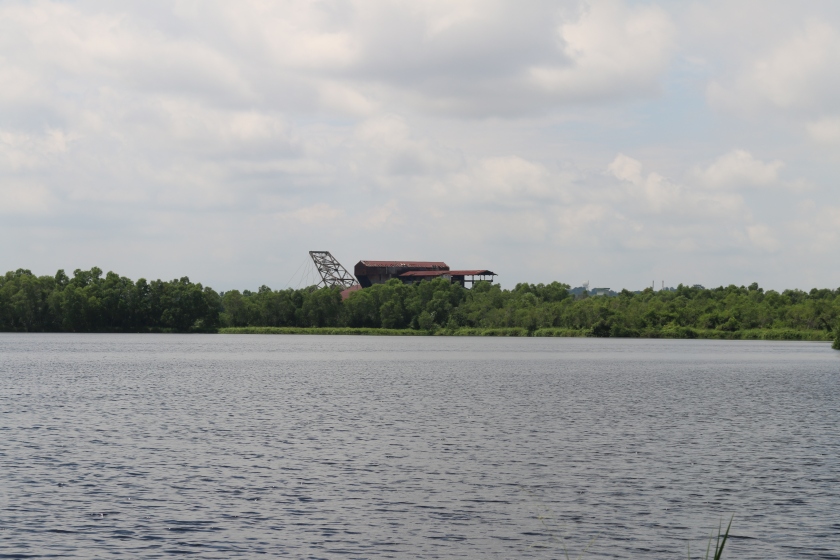 I have seen the Dengkil dredge many times from a distance since it is visible from the main road when driving to the airport. Today I tried to see it from up close.

Thanks to Google Maps it was easy to find the best way to approach the dredge which is surrounded by lakes created by the dredge’s excavations. A gravel road takes you part of the way. This road is busy with rubbish trucks as one of the lakes is being used as a landfill. 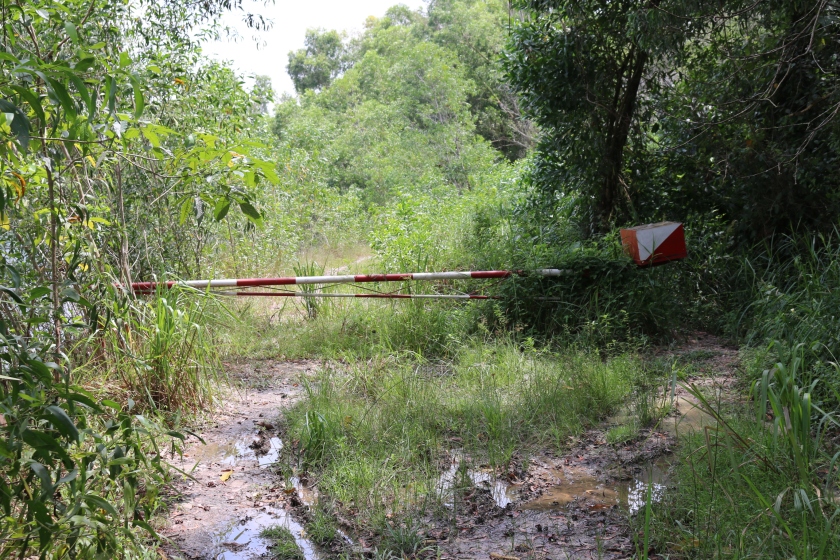 I parked the car next to a lake and walked the rest of the way, a distance of about 1 km each way. The path is not too overgrown and I did not see any ‘no trespassing’ signs. There was a barrier blocking the way to cars but again no ‘keep out’ signs. 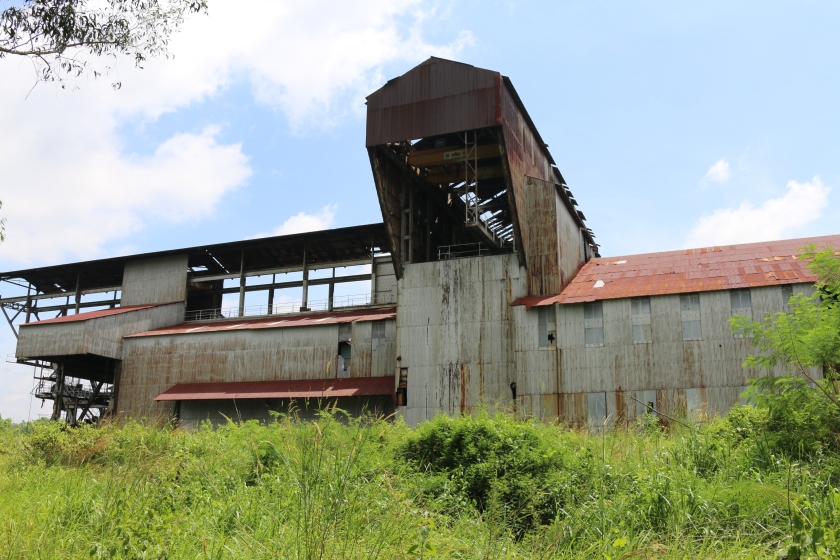 Finally I managed to get near the dredge which is an enormous piece of engineering. According to Liz Price’s excellent blog, this is the Sri Banting Dredge, built in Malaysia in 1974 (much newer than the colonial-era Tanjung Tualang dredge) and weighs 4,800 tonnes. 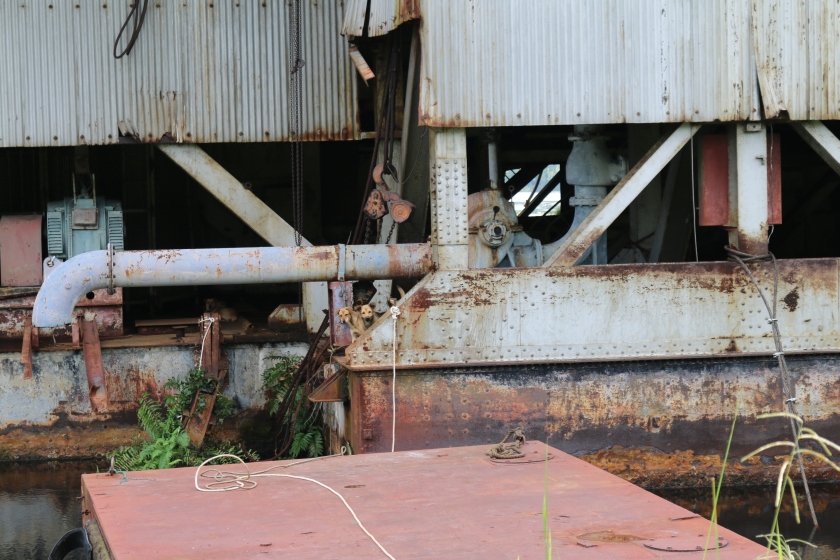 It was not possible to go on board as it was moored a few metres off-shore and there was no gangplank. Anyway it is private property. There were a couple of vigilant watchdogs on the dredge to deter trespassers. 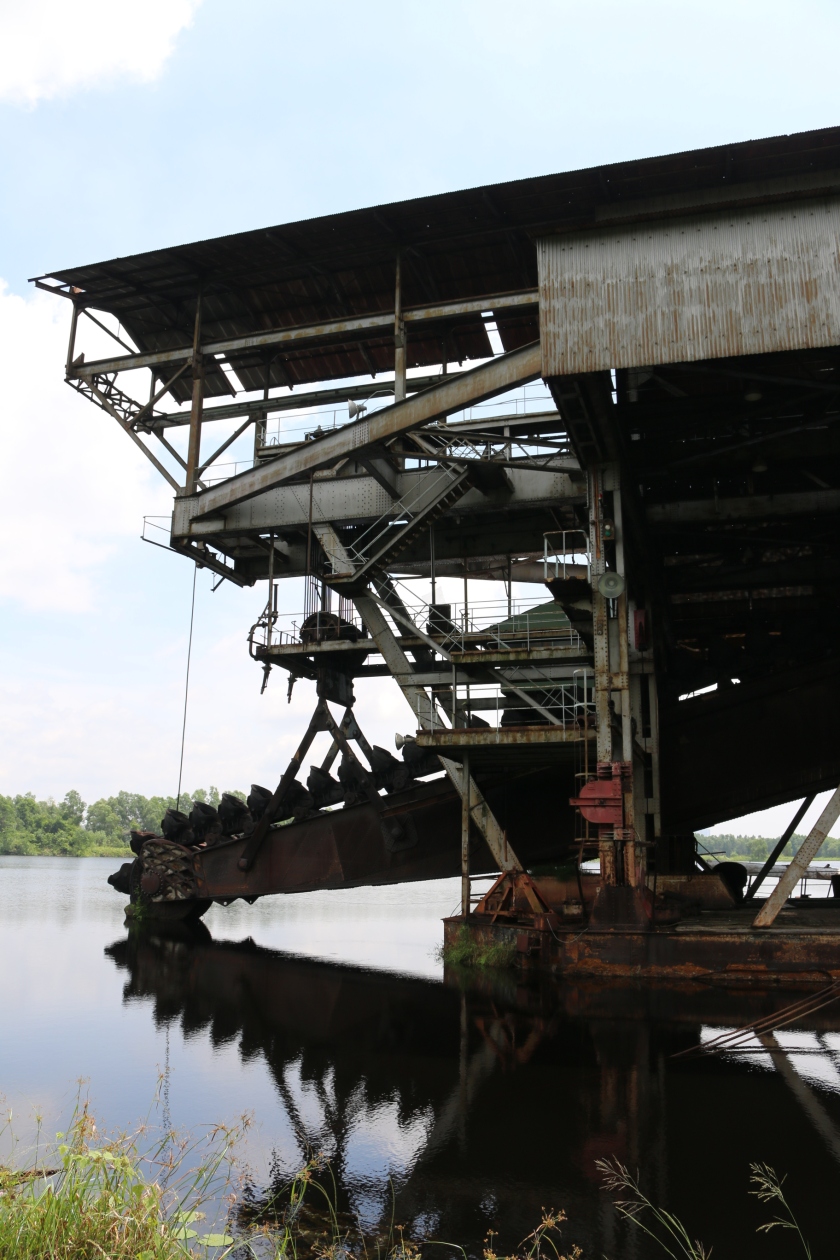 No doubt this dredge is earmarked for sale at some stage. Many of the other tin dredges in Malaysia were sold off to foreign buyers such as this one which was towed to Bangka Island in Indonesia in 1987. 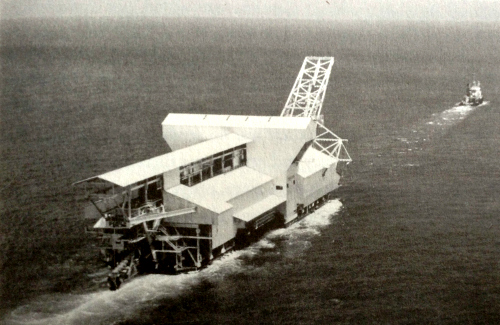 If no buyer can be found it would probably be sold for scrap and that will be the end of Selangor’s tin mining heritage. At least the Tanjung Tualang dredge is being preserved as a museum by the Perak State Government and should be open to the public, long overdue, at the end of this year. 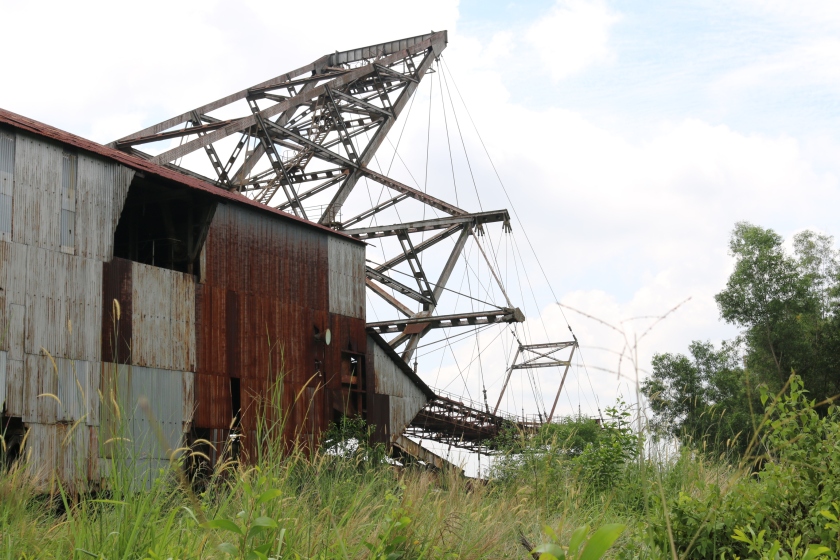 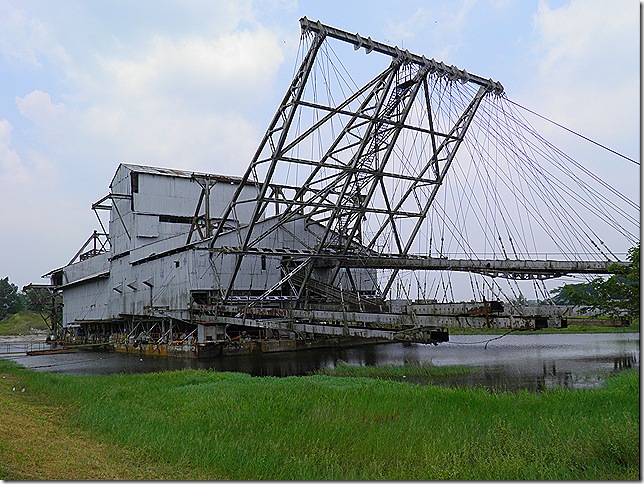 I had read that close to the town of Batu Gajah in Perak there is a surviving tin dredge, a colossal industrial relic from the days when Malaysia was the world’s largest tin producer.  I drove there recently to take a look.

A tin dredge is like a floating factory. This one, named Tanjung Tualang Dredge No. 5, or TT5,  weighs 4,500 tons and is supported by a pontoon of 75 meters in length, 35 meters in width and 3 meters in depth. It was built in England in 1938 by F.W.Payne & Son which, at that time, was a major design engineering company in bucketline dredges.

Tin dredges work by scooping up bucket loads of tin-bearing soil at the front end, which then passes through an oscillating drum and a system of jigs and screens to extract the tin, before spewing out the waste material at the rear end through a number of chutes. 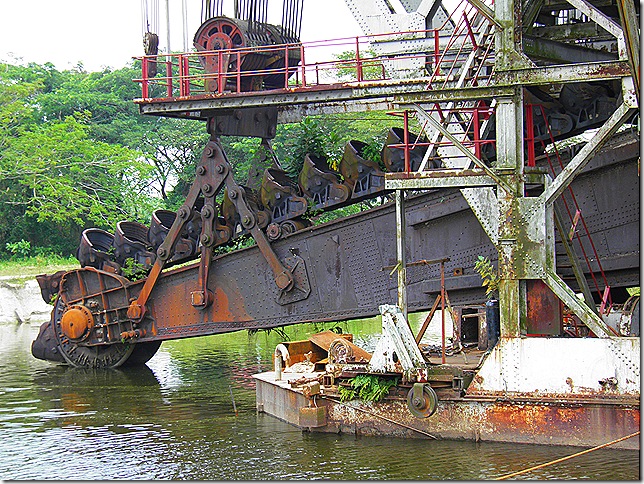 This dredge was built for the Southern Malayan Tin Dredging Ltd, a company formed in 1926 which operated a further 5 dredges  in the Batu Gajah and Tanjung Tualang area. TT5 was in operation for 44 years until 1982 by which time the Malaysian tin industry was in rapid decline due to a combination of exhausted tin deposits, low tin prices and high operating costs.

Since 1982 the dredge has fallen on hard times. All the other dredges in the area were disposed of long ago and this last remaining example was in danger of being of being sold off for its high scrap metal value until heritage-loving individuals launched a “Save the Dredge” campaign. The dredge is currently owned by the Perak State Government so there is a chance it will be preserved. A visitor car park  has been created  (sadly mine was the only car in it) and there is a miniscule museum providing some information on tin mining and you have to pay a small fee to get up close. Workmen were doing some maintenance  during my visit ( a good sign perhaps?) so I was unable to go inside the dredge. 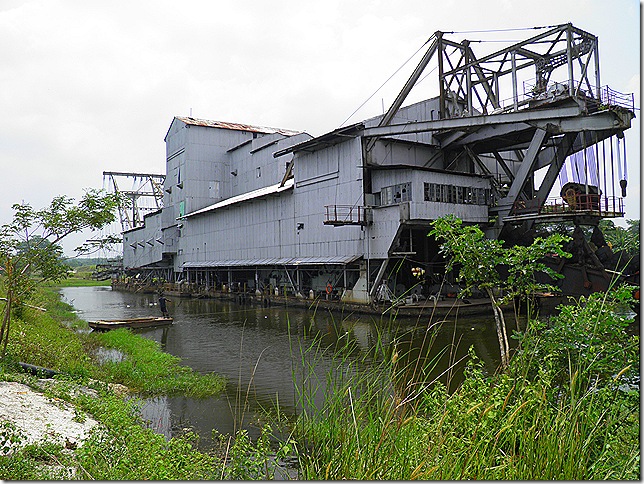 All the tin mining and dredging activity which took place for over a hundred years has left behind a pockmarked landscape running for hundreds of miles down the length of Peninsular Malaysia. But the scars have filled with water and cleaned up quite well  and now serve new roles as fishing ponds, wetlands, water features for housing developments and so on. 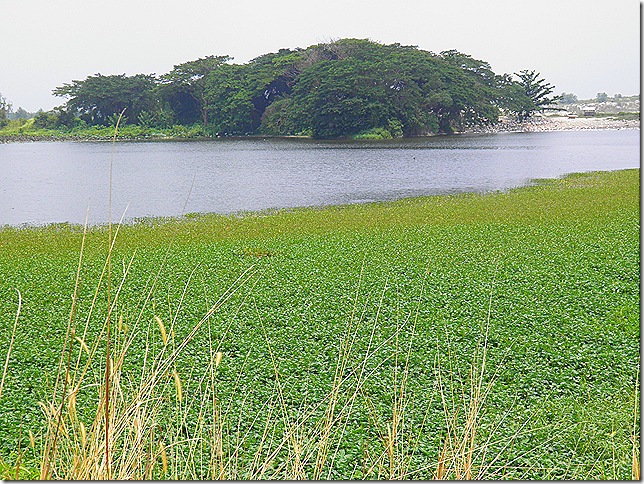 The lady collecting the entrance fee said that this is the last tin dredge in existence in Malaysia. That may not be entirely accurate as I have heard there is another near Paya Indah, Dengkil, albeit a newer model, but that too might be sold off to Australia shortly.

If you are interested in seeing this important piece of Malaysia’s industrial heritage you had better visit Tanjung Tualang soon while you still can. 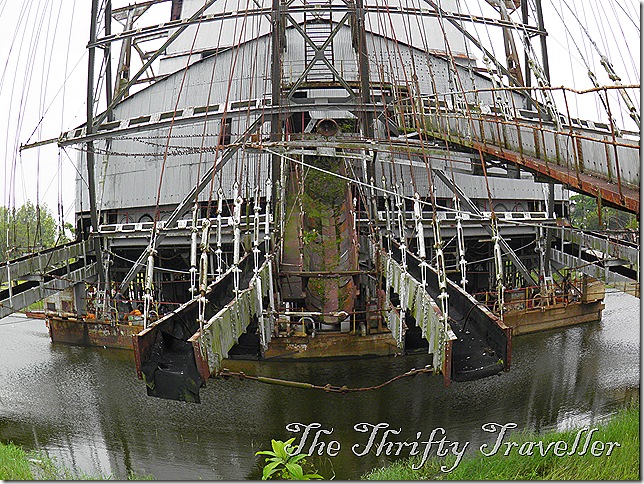