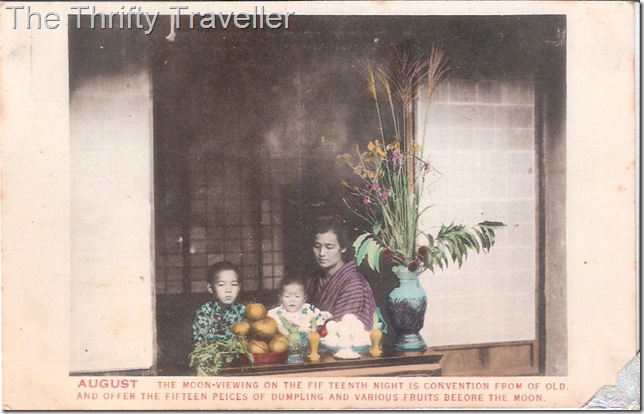 The Tsukimi Moon Viewing Festival is another 1000 year old custom introduced from China where it is known as the mid-autumn festival.

It falls on the 15th day of the 8th lunar month meaning that it occurs sometime during September or October on our calendar (i.e. not August at all). The full moon on this night is said to the brightest and most sublime of the year.

Tsukimi is also called jujoya and is a time when farmers pray for a rich rice harvest.

Traditionally families would arrange rice-like pampas grass (susuki) and bush clover (hagi) in a vase next to an open window from where they would quietly contemplate the moon’s beauty.

Offerings of moon-shaped dumplings (dango) , taro potatoes (satoima), together with autumn fruits such as persimmon, grapes and pears are also enjoyed at this time.

Whereas in the West we imagine a man in the moon, the Japanese look out for a rabbit making mochi rice-cakes.

Tsukimi soba or udon is a hot noodle broth topped with eggs symbolising the moon.

Like most festivals in Japan, Tsukimi has been commercialised and McDonalds even serves a tsukimi burger (containing egg) at this time of year.