On a stone plinth facing Tokyo’s Shibuya station sits a bronze statue of a dog. It commemorates a loyal dog called Hachiko who was born in 1923. Hachiko was an Akita, a large breed of dog originating from the mountainous areas of northern Japan.

Hachiko was acquired as a puppy by Dr. Hidesaburo Ueno, a professor at the Japanese Imperial University. A close bond between master and dog developed and over the next year Hachiko used to accompany Dr Ueno to Shibuya station every morning and when he returned each evening, Hachiko would be waiting for him at the station entrance.

On 21st May 1925, when the dog was 18 months old, he waited for his master’s arrival on the six o’clock train as usual but Professor Ueno never returned as he had suffered a fatal stroke at work.

For the next nine years Hachiko returned to the station every day to meet the 6 o’clock train and await his master’s return. He allowed passers-by to pet and feed him scraps but he never gave up the vigil at the station for his master, until his death in 1935. 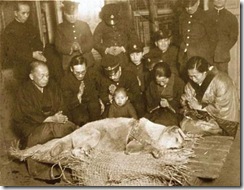 The story of Hachiko has become well known and at least two films have been based on his life; a Japanese film called Hachiko Monogatari (1987) and a Hollywood remake starring Richard Gere, Hachiko A Dog’s Story (2009).

Akita puppies like this one are very cute but they grow into large, strong dogs which can be aggressive and require careful training and handling.

We saw a cuddly Akita puppy in a Shibuya pet shop. ‘Let’s buy it’ said my daughter. Even if we wanted to we couldn’t bring it to Malaysia where Akitas are a banned breed.

Dr Ueno would scarcely recognise Shibuya station today but no doubt would be delighted that his faithful pet not only has a statue but also a mural on the station wall.

The station entrance used by Dr Ueno is now called the Hachiko Entrance.

An old railway carriage has been positioned in front of the entrance and serves as a tourist information office and is a popular meeting point for the young crowd which frequents this part of Tokyo. 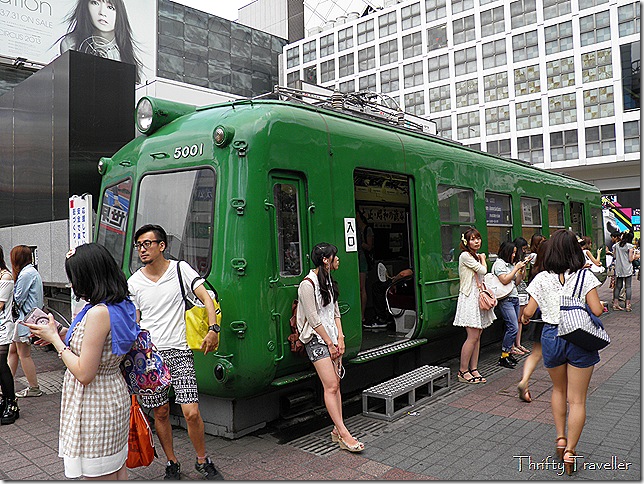