I spotted this interesting old advertisement in the June 1955 edition of National Geographic Magazine. It compares the cost and time taken to travel from Los Angeles to New York by air, train and bus. 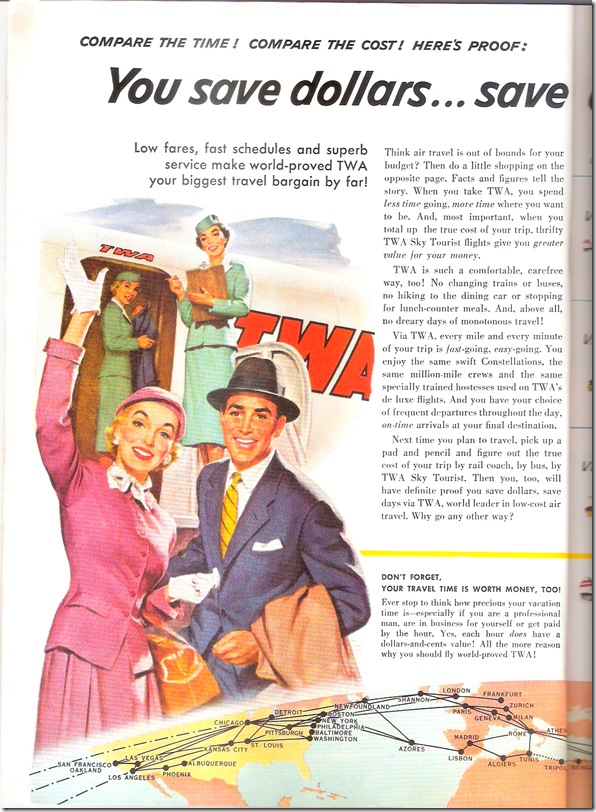 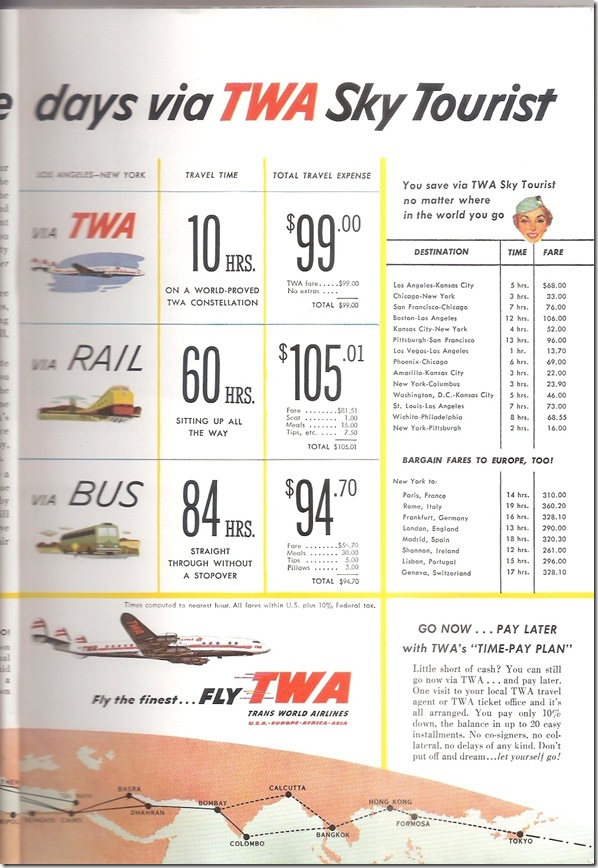 The advert suggested that the cost of travelling by air was almost the same as by train or bus, once meals, tips and other extras were taken into account. Of course the air journey was much faster.

I thought it would be interesting to see how much it would cost and how long it would take to do the same Los Angeles to New York trip these days.

The cheapest one way air ticket from LA – NY today costs around US$135. A return fare offers better value for money at around $230 (or $115 each way). This means that the air fare has only increased by $16 (16%) in the 58 years since the advert was written while prices generally have increased over 830% during the same period. Fuel prices have risen even faster than inflation meaning that air travel has had to become way more efficient since the days of TWA’s Constellations. More efficiency means less legroom, less frills, less smiles. Air travel today is a bargain compared to 1955 but I suspect customer satisfaction is less than it was.

The flying time has been cut from 10 hours, which probably included a stop in Kansas City, to 5 hours and 15 minutes non-stop.

Train ticket prices have increased faster than air tickets but still by much less than inflation. The train fare for the 3000 mile coast-to-coast journey, via Chicago, today starts from $218 for a spacious reclining seat, which is pretty good value. That is an increase of 167% from the 1955 price.

The train service however seems so have become less efficient and the journey from LA-NY now takes 72 hours, compared to 60 hours in 1955.

Bus fares have gone up fastest of the three modes of transport, but again have become cheaper in real (inflation adjusted) terms. The bus fare (Greyhound Bus) today costs $189, an increase of 233% compared to 1955 prices.

Journey times have improved. It now takes 2 days, 18 hours and 10 minutes (very precise) to complete the journey which is 18 hours less than it used to take in 1955.

Given the above it is clear why air travel has blown away the competition and is by far the preferred method for crossing the continent. Not only that, according to the TWA advertisement, travellers only had to give a 10% down-payment and could pay off the balance in 20 instalments with no collateral required. Not surprising that TWA went bust!