Dasar Sabak Beach near Kota Bharu is one of the first spots where the Japanese Army landed its invasion force on 8th December 1941. It is said that fighting here commenced an hour before the attack on Pearl Harbour began due to an error by the Japanese in calculating a time difference. This beach therefore could claim to be the scene of the spark that ignited the Pacific War.

There is little here today to mark the events as coastal erosion has changed the beach’s appearance beyond recognition.

I have a guidebook which was written only written a few years ago and in it Sabak is described as ‘the soul of Malaysia’s east coast’ and ‘a rustic fishing village where fleets of perahu (local fishing boats) can be seen beached on the beach after the day’s catch has been landed’.

It used to look something like this (which is actually a different beach several miles away)and there were old WWII pillboxes on the beach.

Over the past 10 years or so, 200 meters of beach has been lost to erosion taking pillboxes with it.

This is how Sabak beach looks today: 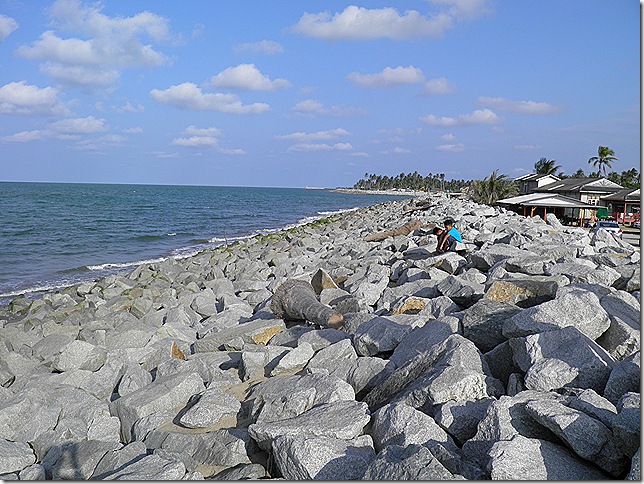 Some 70% of the Kelantan coastline is said to be affected by coastal erosion.

There are still a few nice beaches left and I have written about three of them on my Malaysia Traveller website.

Better visit them soon before they all disappear!