I had heard that there is an interesting temple in Seremban which I had overlooked on previous visits.

Driving from KL on the north-south expressway, I could just make out the roof of the temple on a hilltop to my right immediately before taking exit 218. It was quite difficult to find the access road to the temple but eventually I arrived at this signboard. 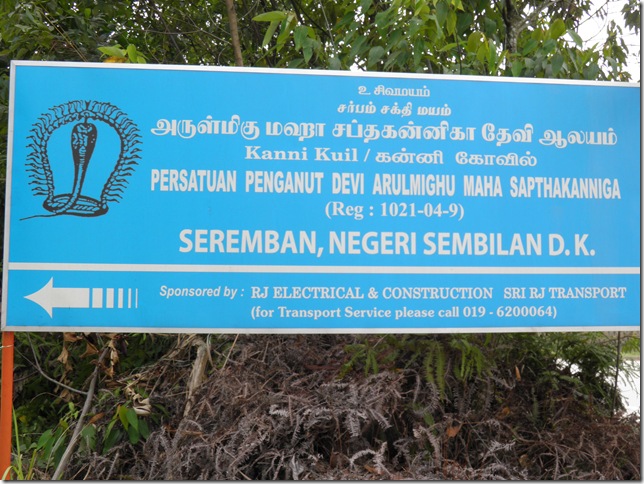 I parked the car nearby and hiked up the gravel road for 15 minutes to the hilltop. The temple goes by a number of names – Virgins’ Temple, Kanni Kuil and its formal title, Arulmighu Maha Sapthakanniga Devi Temple. I believe ‘Sapthakanniga’ translates as ‘seven virgin goddesses’.

There are various mystical tales concerning the temple. Over 100 years ago, the hill on which it is located, sometimes called Victoria Hill, was being mined for silica by a Chinese contractor using explosives. The contractor was having difficulty in getting his dynamite to work when he saw and killed a snake. Shortly afterwards the contractor and his workers fell ill. His spiritual mentor advised him that his mining of the hill had offended the spirit Nagamma who frequented the hill in the form of a snake or a young lady. The contractor was advised to perform prayers and build a temple for Nagamma on the hilltop in order to recover his health, which he did.

Another story tells of an ice cream vendor who, after a day of selling at the temple,  left without praying or making an offering. On his way down the hill he encountered two beautiful sari-clad ladies who approached him for ice lollypops. After reaching home he fell ill. He consulted a bomoh (a kind of Malaysian psychic) who told him that those two ladies were actually goddesses and sure enough when he went to pray for recovery at the temple he saw that two of the statues resembled the women.

I too encountered some women on the path. They didn’t look like off-duty goddesses but I was taking no chances. Seeing that one of them was suffering from fatigue (I think she was expecting) I offered them some drinking water. They declined my offer but at least I reached home without feeling sick.

The temple itself was fairly simple and less ornate than many. 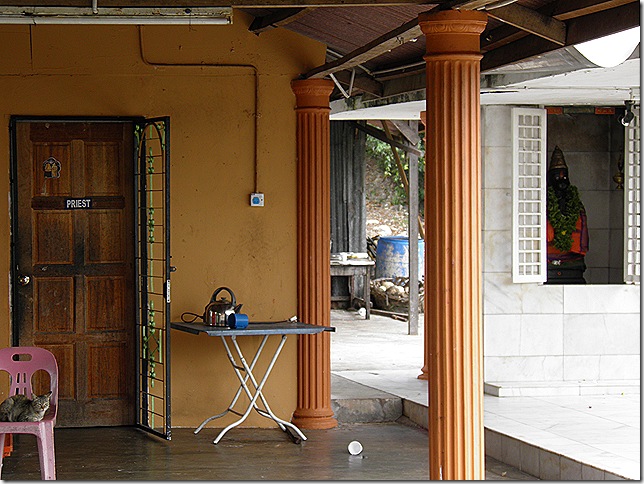 Since I was the only visitor, the priest very kindly unlocked the statues of the seven goddesses from behind their caged door and performed a short ceremony for me. He waved a lighted candle in front of the statues,  sprinkled some ash-like incense on my head and gave me a dip of holy water to drink.

The priest, who came from Madurai in Tamil Nadu, explained how devotees, hoping for a special wish to be granted, circle the temple’s neem tree 7 times before a full moon after fasting for 3 days and then tie pieces of silk cloth around the tree’s branches. 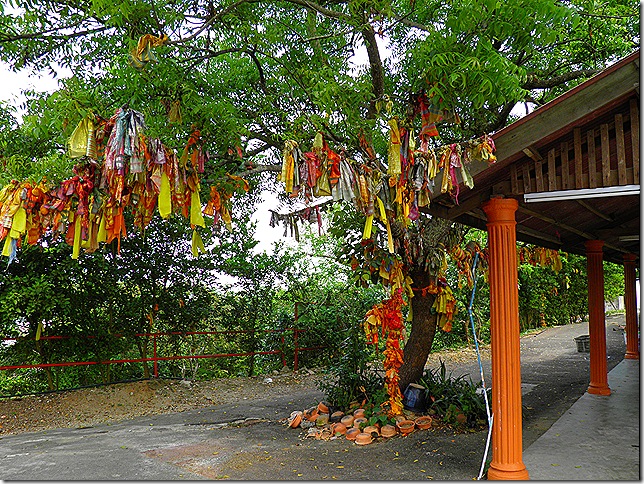 Before leaving, I made sure I dropped a donation in the box marked ‘Derma Onation’ (perhaps I was supposed to donate some skin?).

There was a lot of rubbish on the hillside.  My visit was not long after May 1st, the busiest day in the temple’s calendar, when hoards of devotees carry up offerings of milk and generously leave litter all over the place so that others can pick it up to gain extra merit.

I do not know who the hillside belongs to but there was evidence or rubber rustlers stealing latex from a few rubber trees which seem to be growing wild here. 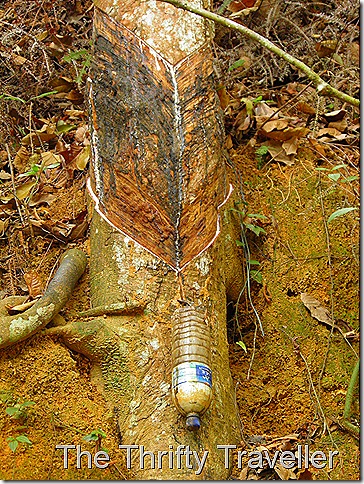