I have always been fascinated with land frontiers, where crossing an international border brings a sudden change in language, currency, religion, architecture, ethnicity or political system.

The greater the contrast, the better. Thus crossing from England to Wales is not as exciting as say, crossing from China to Russia .

Since I was travelling in the far north of Perlis, the northernmost tip of Malaysia, I thought I would visit the Thai border at Wang Kelian and see if it is possible to cross on foot.

The road to Wang Kelian was very scenic,  passing through the Perlis State Park and climbing over the Nakawan Range of limestone hills.  When the road reached its highest point I took a look back at the 390m twin peaks of Bukit Chabang in the distance. 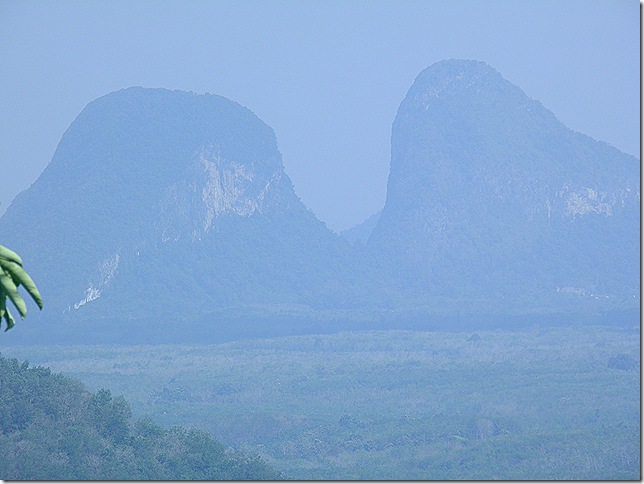 There was nothing really at Wang Kelian but it is famous for its Sunday market, when Thai and Malaysian nationals can cross into each other’s territory without a passport for up to 1 km in order to shop at the many stalls that line the road.

When I went it was not Sunday and there were no stalls on the Malaysian side of the border. I parked my car just meters from the Malaysian border post and walked up to the Immigration window and explained that I wanted to cross the border briefly and maybe get some lunch before returning to Malaysia. No problem, said the immigration officer who was obviously used to this type of request. He stamped my passport and I walked through.  (My car was not insured for Thailand so driving through was not an option).

At the Thai immigration window I had to complete arrival and departure cards and the official stamped my passport. Although I was entering the Land of Smiles the officials were not that welcoming but I think that is part of the job description for immigration officers all over the world.

I was now in Thailand and there were a few dozen stalls lining both sides of the street but no sign of a restaurant. The best I could get was a pre-cooked fried rice served in a polystyrene lunch box. I suppose I could have taken one of the silver coloured Hilux pick-up taxis to take me to the nearby town of Satun for a decent bowl of Tom Yum but I didn’t really have time and anyway I was on a tour round Malaysia, not Thailand.  I’m not sure if Satun is pronounced like the planet or the devil – probably neither.

I looked around for a souvenir to take back from Thailand. A sack of garlic perhaps? No, I still had several days of driving ahead before reaching home and I didn’t want to stink out the car. The dry snack foods would also not be seen as a terribly exciting present by my family so I left Thailand empty handed, just 20 minutes after arriving.

I was slightly anxious when queuing up to exit Thailand recalling an awkward experience I had in the Middle East many years ago. I was in Dubai for a two week business trip and I decided to fly over to Oman for the middle weekend, taking advantage of a visa which I thought was still valid. I entered Oman without a problem but when I was trying to leave the next day it turned out that my visa was not valid after all as it was missing an extension stamp. They refused to let me catch my plane and I had to stay another day to obtain the right documentation, inconveniencing a lot of people. Luckily there were no such problems in leaving Thailand and re-entering Malaysia.

Was it an exciting land frontier? Not really. The language and currency changed on crossing the border (although the vendors were happy to accept Ringgit) but the scenery and people looked the same. This is the Muslim part of Thailand and the females were wearing the same tudong (headscarves) as in Perlis.  And the items on sale were pretty similar to those in Malaysia. We can buy garlic in Malaysia!