We recently spent a couple of nights in this place, the Marina Bay Sands, which describes itself as the most spectacular hotel in Singapore.  It was officially opened in June 2010. It is owned by Las Vegas Sands Corp and, in true American style, it is big and bold, with 2561 hotel rooms and suites, a huge casino, a convention and exhibition centre,  a theatre, a museum, an ice rink and a shopping mall complete with its own canal.  The shopping mall also boasts a number of restaurants hosted by celebrity chefs (i.e. overpriced).

The hotel has a novel design with three curvaceous 55 storey towers topped by a platform shaped like a giant ironing board. This made for a challenging construction project with a hefty price tag of US$5.5 billion making it the world’s second most expensive building (after the Abraj Al Bait in Mecca).

The ‘ironing board’ supports Skypark, a 2.5 acre roof deck which includes a 150 metre long vanishing edge swimming pool, 57 floors up in the sky.

There must be 1000 people on this pool and observation deck at any one time of which 99% are either taking photos, posing for photos or both (selfies). I reckon this amounts to about 250,000 new photos uploaded every single day making Marina Bay Sands one of the most photographed attractions in Singapore.

Marina Bay Sands is the 34th largest hotel in the world and uses 36,000 keycards a month. It achieves an occupancy rate approaching 99% despite charging a fortune for its rooms. Our room was ridiculously expensive – definitely not the sort of place that Thrifty Traveller normally frequents! 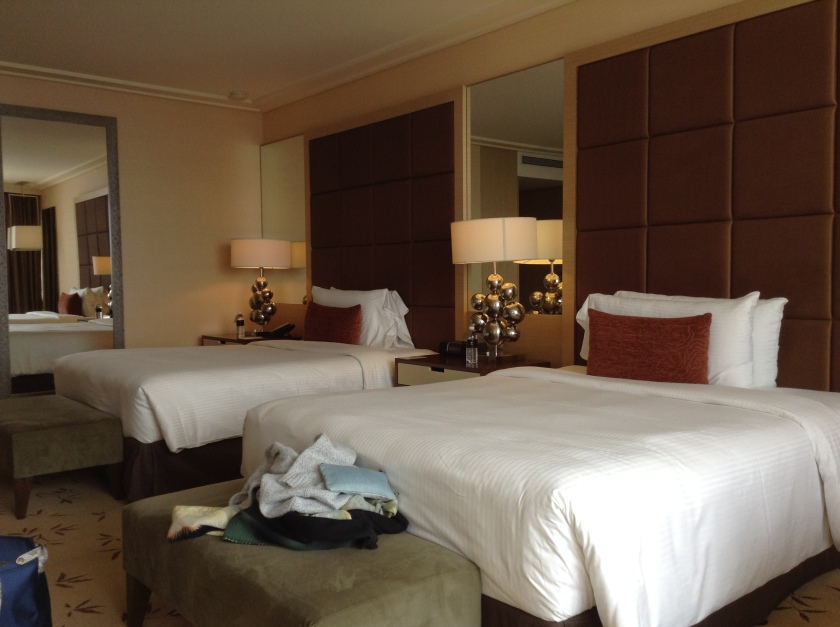 It was a nice enough room, comfortable and spacious, but nothing amazing. The view was great though.

The room came with ‘exclusive’ use of The Club where complimentary drinks and small eats were served at tea time and early evening. It could not have been that exclusive as it was packed with people knocking back the free Piper Heidsieck champagne. Rather like an airport business or first class lounge. 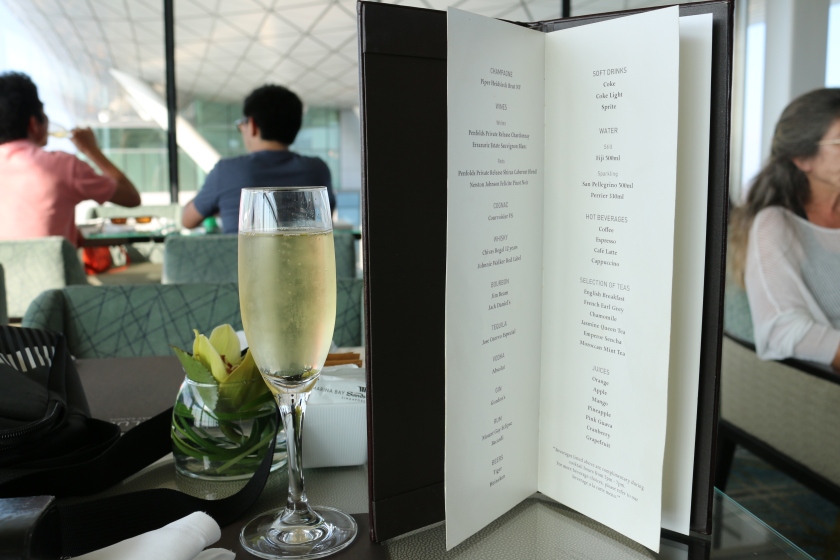 This kind of ‘mass market luxury’ appeals to some but is not really my cup of tea, though I would not object if an employer was footing the bill.

Marina Bay Sands has a good location close to Gardens By the Bay and the Singapore Flyer and with great views over downtown Singapore. And with a big mall next door there is no need to go far.

The hotel (and casino) appeared to be very popular with Chinese tourists (from PRC) and I note from official Singapore visitor numbers that Chinese are now by far the most numerous of all tourists (excluding Singapore’s neighbours, Malaysians and Indonesians, many of whom visit Singapore for employment). Indian tourists are the second most numerous. I guess this is a sign of the times.

We enjoyed our stay at Marina Bay Sands but in the highly unlikely event that I were to splurge again in Singapore I would probably opt for somewhere more sumptuous such as the Ritz Carlton, Shangri-La, Fullerton Bay or even Raffles.