The people responsible for selecting the designs of a nation’s banknotes have a tough job. It is impossible to please everybody.

For example, when the Bangko Sentral ng Pilipinas (the central bank of the Philippines) released a new set of banknotes in 2010, people complained that the new designs featured five famous landmarks from Luzon but only one from the Visayas and none at all from Mindanao. While some were pleased that the US flag no longer appears on the new Peso 100 bill, others were upset that US General Douglas McArthur’s famous (and stage managed) Leyte landing scene is depicted in the new Peso 50 bill and queried why reminders of foreign domination should still appear on Philippine currency.

The Philippines is not the only country to face such problems. The United Arab Emirates is made up of 7 Emirates but only 3 of them (Abu Dhabi, Dubai and Sharjah) get the honour of having their landmarks appearing on the nation’s banknotes. 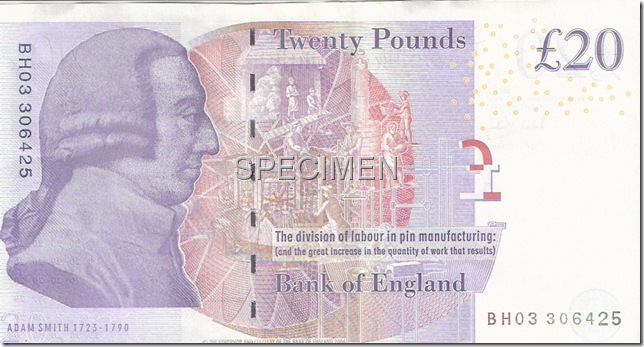 A £10 note issued in 2000 featuring Charles Darwin and a hummingbird attracted criticism from pedantic types because his research was actually based around finches and mockingbirds, not hummingbirds.

At least the Bank of England does not have to worry about whose portrait to put on the face of the banknote as the practice is to use the reigning monarch whereas in the Philippines they will only portray a President on a banknote after his or her death which opens a can of worms about whom to pick.

When Euro banknotes were introduced the designers had no hope of keeping all the member countries happy so they copped-out by using bland, generic designs which could not be identified with any specific country. Still, despite their drab appearance, it is worth hanging on to your Euro banknotes as they might become collectable when the Euro is scrapped in the not too distant future.

I think countries like Hong Kong and Scotland have the right idea when it comes to banknote design – they delegate the task to the commercial banks. In Hong Kong, the 3 note issuing banks (Hongkong and Shanghai Bank, Standard Chartered and Bank of China) decorate their notes with images of their local head office buildings together with some local landmarks and logos. They wisely steer clear of political and historical personalities. In Scotland, by having a number of  banks’ designs  in circulation at the same time they can cover a larger number of famous figures and keep more of the public happy. And if the public does complain about a design  the Scottish Government can say it is nothing to do with them.