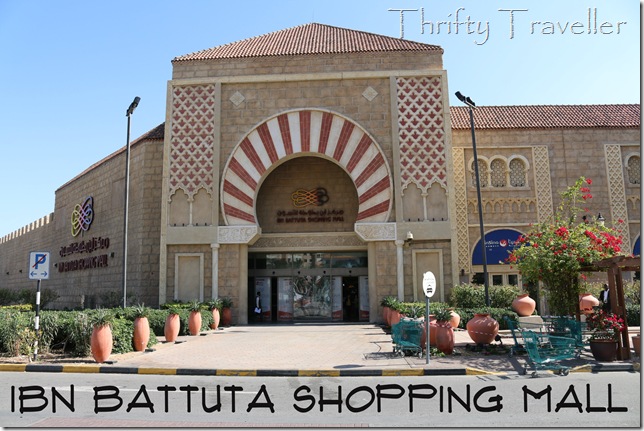 Ibn Battuta Shopping Mall claims to be the world’s largest themed shopping mall. It is named after the famed Moroccan traveller and scholar Ibn Battuta who, over a 30 year period starting in 1325, toured extensively throughout the Islamic world and beyond. He wrote up his odyssey in an account called Rihla (The Journey), which perhaps makes him the first ever travel blogger!

The mall is divided into six themed courts reflecting regions visited by Ibn Battuta – China, India, Persia, Egypt, Tunisia and Andalusia with decor and architecture to match. Dotted around the mall are various exhibits detailing Ibn Battuta’s travels and achievements. Of course 99.9% of shoppers completely ignore these and focus entirely on the shops but at least the management have made a good effort to differentiate this mall from all the others in Dubai.  I think it has been very nicely done.

The Mall is built on one level and is a massive 1.3km long. If you walk from one end to the other you’ll probably be in need of some refreshment. Adjacent to the Mall is the Mövenpick Hotel whose cavernous interior contains 8 watering holes and restaurants to choose from.

The Mövenpick  has been designed and decorated, inside and out, to fit in with the Mall’s concept and very smart it looks too.

Ibn Battuta Mall is definitely worth a visit and easily accessible by Metro.