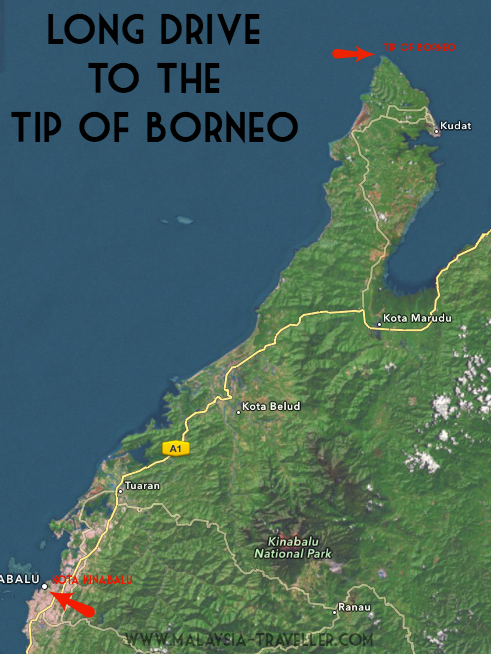 I was in Sabah last month to explore some more places in Malaysian Borneo. I wanted to visit the Tip of Borneo, the northern-most point of the island of Borneo, and the most northerly point of Malaysia, excluding some outlying islands.

It is located just over 200km from Kota Kinabalu airport from where I rented a car. Here are some of the points of interest I found along the way.

The first stop-off was to see Rumah Terbalik, the upside down house near the small town of Tamparuli.

You might wonder why anyone would go to the expense of building an upside down house and not even be able to live in it. There are actually quite a few of them in the world (Germany, Austria, Poland among other places). There’s even another one in Malaysia, in Melaka, which I guess I should go and see one of these days.

Rumah Terbalik seems to be on the itinerary of many Sabah tours and draws in a steady flow of visitors paying RM10 per person (for Malaysians) and RM18 (for foreigners) so presumably it is a profitable venture. It’s quite well organised with guided tours, a gift shop and restaurant. Unfortunately photography is not allowed inside the house otherwise I could show you all the household items stuck to the ceiling (the owners might want to review this policy in this selfie-obsessed age).

Next I stopped to walk across the pedestrian suspension bridge crossing the Tamparuli River in this colourful market town.

The suspension bridge (or hanging bridge as they are called in Malaysia) is in constant use by school kids and other pedestrians. Although it sways and bounces underfoot, its structure is quite solid but you need to keep an eye out for missing planks. More precarious looking is the road bridge, just a few feet above the river level. Bridges in Sabah have a habit of being washed away in the rainy season. 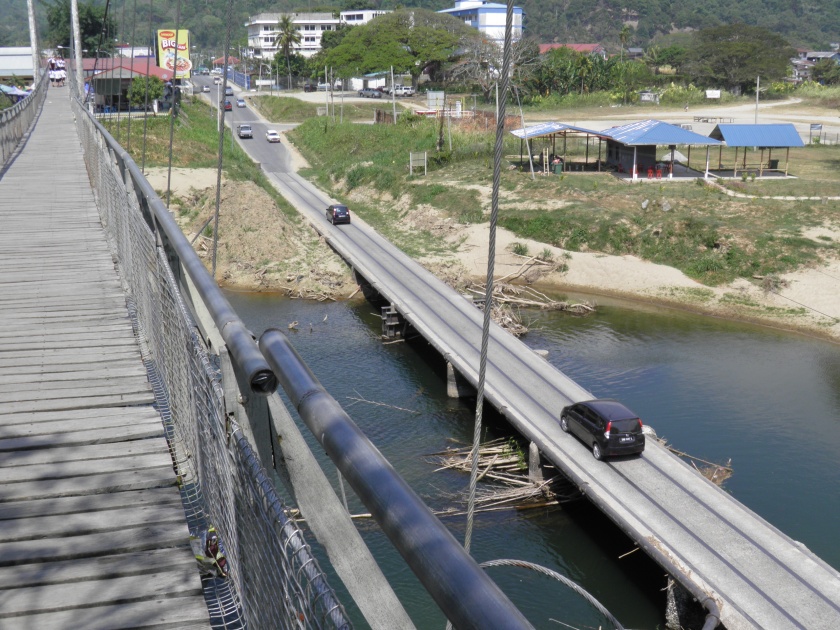 At the far end of the bridge is a small memorial to two British soldiers, Private JWN Hall and Driver DC Cooper who drowned here in May 1960 while trying to negotiate this bridge in a Land Rover during a flood.

The next settlement of any size on this road in thinly-populated Sabah is the town of Tuaran. The population here are mostly ethnic Dusans and Bajau but the sizeable Chinese community have built themselves a very fine temple with an ornate 9 storey pagoda.

According to the plaque outside, construction of the pagoda began in 1990 and was completed in 2005.

In need of some water, I stopped off at the village of Tenghilan where there is a row of half-century old wooden shops of a sort seldom seen these days.

There is a small monument here with the markings 1881-1981 and a map of Sabah, appearing to commemorate a centenary. The monument is built above a small menhir which once bore a plaque but that has been removed so its significance is unknown.

Almost at the Tip of Borneo is a magnificent white sandy beach which must be one of the best in Malaysia and a well-kept secret.

As you can see from the photo, it is not too crowded. There are no lifeguards and no facilities but there are a few places to stay (Borneo Tip Beach Lodge, Tommy’s Place etc). If you want to get away from it all you should consider this gorgeous 5km long beach which is reckoned to have the best sunsets in Borneo.

Finally I reached my destination.

The vegetation on this windswept headland is not typical for Malaysia.

Some of the sheltered coves here look more like Cornwall than the Tropics.

And here, below, is the actual Tip of Borneo with the South China Sea to the left and the Sulu Sea to the right.

In my next post, I’ll share a few more places that I covered on my Borneo trip.