Fifty years ago the Vietnam War was intensifying as the United States began a bombing campaign over North Vietnam called Operation Rolling Thunder which was intended to either force the N. Vietnamese to the negotiating table or bomb them ‘back into the Stone Age’.

The N. Vietnamese defended themselves as best they could and managed to shoot down many American fixed wing aircraft and helicopters, mostly by anti-aircraft fire, surface to air missiles and small arms fire.

To shore up morale in the face of devastating US raids, North Vietnam began issuing a series of postage stamps boasting of their successes in shooting down American aircraft.

In 1966, another stamp was issued claiming 1000 shot down (I am missing this stamp from my collection).

The artwork for this stamp was taken from this famous ‘Guerilla Girl’ photo showing Capt. Bill Robinson being taken into captivity by a diminutive female soldier.

Bill Robinson had the misfortune to become the longest held enlisted prisoner of war in American history from the shooting down of his helicopter on 20 September 1965 until his release on 12 February 1973. He spent his 7 1/2 years captivity in various prisons including the notorious Hanoi Hilton which I visited and blogged about some years ago. He was horribly mistreated – as he says in his biography* “We were all treated equally, we all got the hell beaten out of us”.

The final set of stamps was brought out in 1973, marking the end of US involvement in the Vietnam War.

These were propaganda stamps and you would assume that North Vietnamese claims must have been greatly exaggerated. How many US aircraft were actually lost? Having trawled the internet it is quite difficult to find a definitive number that everyone agrees on. The number 2257 is mentioned often but it depends on whether you include helicopters, losses due to accidents, losses over Cambodia and Laos and other variables. A declassified US Airforce report (should be a reliable source) puts USAF (i.e. not including Navy, Army, Marines) combat losses of fixed wing aircraft at over 1600.  According to the Oxford Companion to American Military History, 8588 fixed wing aircraft and helicopters were lost. Whatever the true figure, it was a lot! 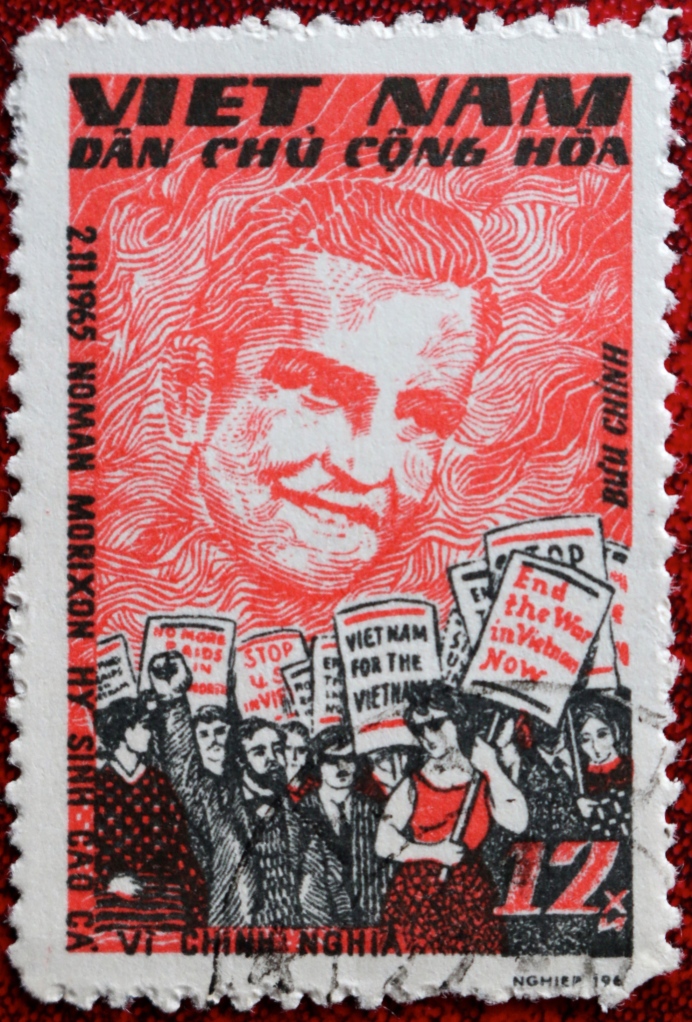 This is another North Vietnam propaganda stamp, portraying Norman Morrison, a 31 year old American Quaker activist who burnt himself to death on 2 November 1965 in front of the Pentagon to protest American involvement in the Vietnam War.

A sad, but ultimately futile, gesture. Will anyone remember his 50th anniversary? Maybe in Vietnam they will.

*The Longest Rescue: The Life and Legacy of Vietnam POW William A Robinson by Glenn Robins