While in Penang recently I took a few photos of the grand old bank buildings on Lebuh Pantai (Beach Street).

Standard Chartered’s office is probably the oldest one still occupied by its original owners. 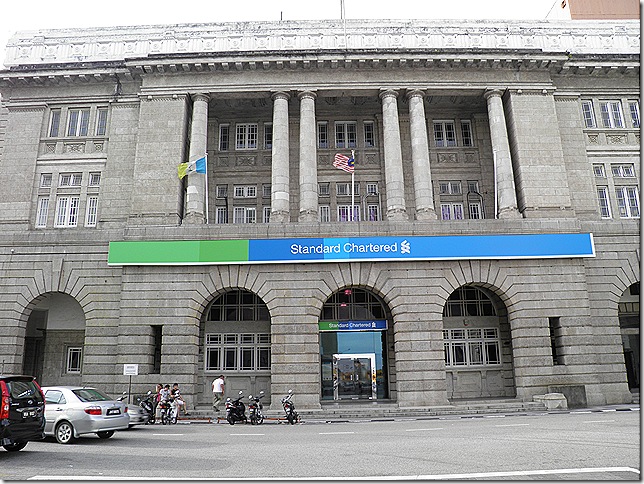 The old Mercantile building has been restored but looks a little different from the original. 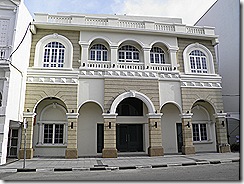 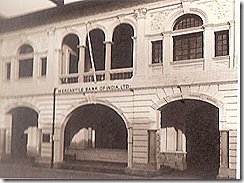 My favourite of the bunch is probably the Nederlandsche Handel-Maatschappij (Netherlands Trading Society) which later became ABN Bank and now is a branch of Royal Bank of Scotland. 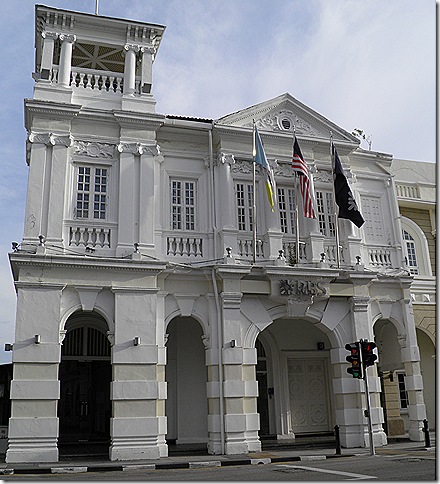 Of course there is a branch of HSBC here too. It is a newer building, completed in 1950. There is nothing special about it except that there is a time capsule buried under the foundation stone containing the 4th March 1950 edition of the Penang Gazette, a sweep ticket for that afternoon’s races (too late to collect the winnings I expect), some coins, stamps and photos of the Penang staff. 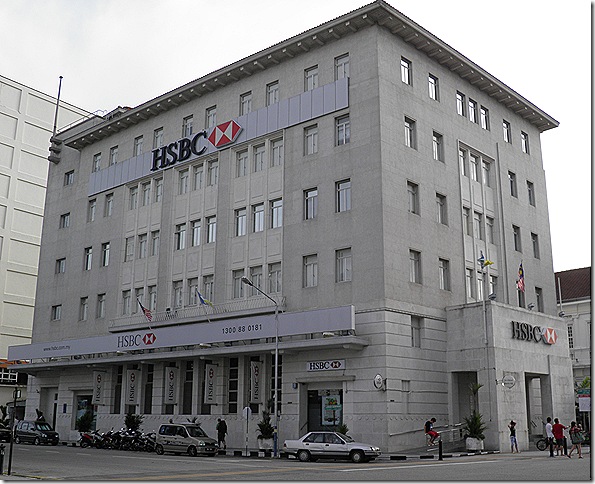 This building occupies the same site as an earlier branch  which had to be demolished due to bomb damage during WWII.  I asked my Dad if he had ever been to Penang. He said  ‘Yes, during the war. We bombed it!’  (he was in the navy). Well I am sure the Royal Navy would never have targeted such a venerable institution as the Hongkong & Shanghai Bank so the damage was more likely inflicted accidentally by one of the USAF’s B-29 high altitude bombing raids on Penang, unless of course the Japanese did it.

Luckily I have an old postcard of the earlier HSBC building to show you what it was like. 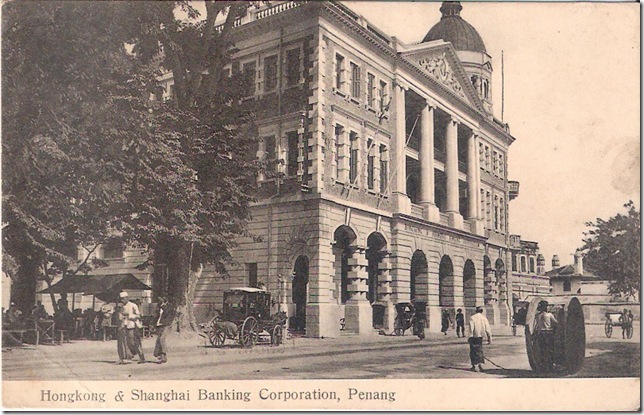 What is remarkable about this postcard is that it was obviously written by a member of HSBC staff in 1910 (or perhaps that is not so remarkable – who else would buy a postcard of a bank?). 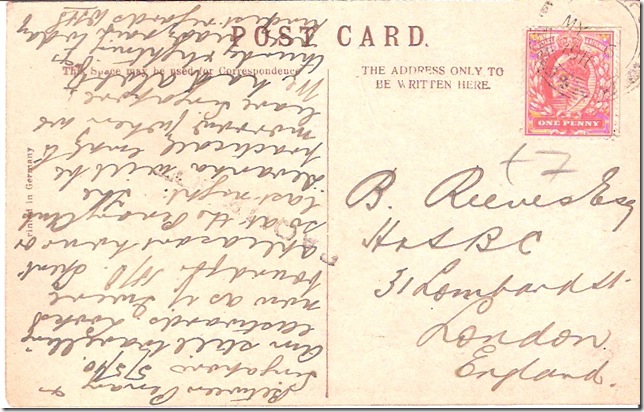 To save you trying to read upside down I shall attempt to decipher the writing:

Am still travelling eastwards. Looks now as if I were bound for H/O. Spent a pleasant hour or so at the Penang Club last night. The Devanha will be practically empty tomorrow when we leave Singapore. We had a lot of thunder & lightning & very heavy rain today. Kindest regards, WHS.

The postcard is addressed to his colleague B. Reeves at HSBC, 31 Lombard Street, London which is where, incidentally, the famous author PG Wodehouse worked briefly from 1900-1902 before he realized that he wasn’t cut out for banking. (Some of us took a lot longer to work that out!).

The ‘Devanha’ referred to in the postcard would have been the S.S. Devanha, a passenger and cargo liner owned by the Peninsular & Oriental Steam Navigation Company (P & O) which plied the UK to India/China route. This 8092 ton vessel was built by Caird & Co. in Greenock in 1906 so it would have still been quite new and no doubt was a very comfortable and civilized way to travel from UK to Hong Kong, which is where Mr. WHS seems to be bound. 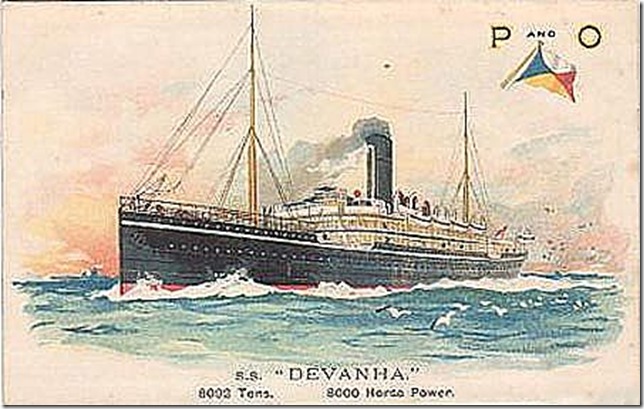 During the First World War the ship was requisitioned and took part in the Dardanelles campaign, first as a troopship and later as a hospital ship. 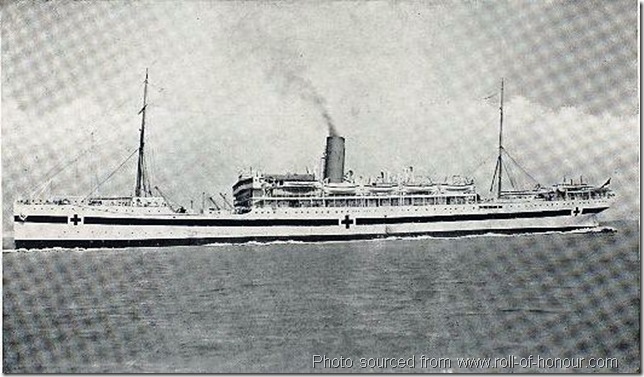 The Devanha transported the 12th Battalion of Australian troops to land at what later became known as Anzac Beach. One of her lifeboats which the soldiers used to row ashore is now on display at the Australian War Memorial Museum in Canberra. 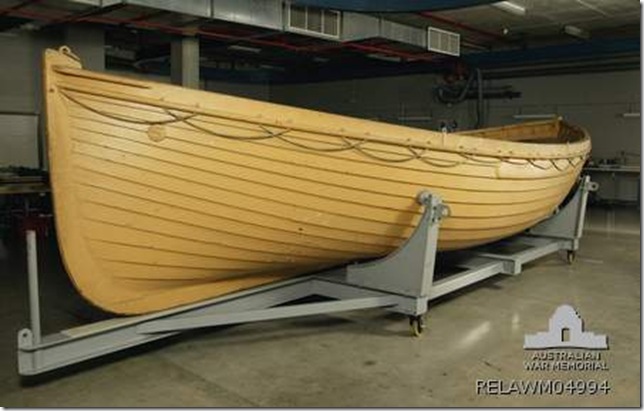 The Devanha was scrapped in 1928 in Japan of all places where it could perhaps have been been melted down into war materials to be later used in the invasion of Penang bringing this story full circle.