In the Stadthuys museum in Malacca you can find this painting. 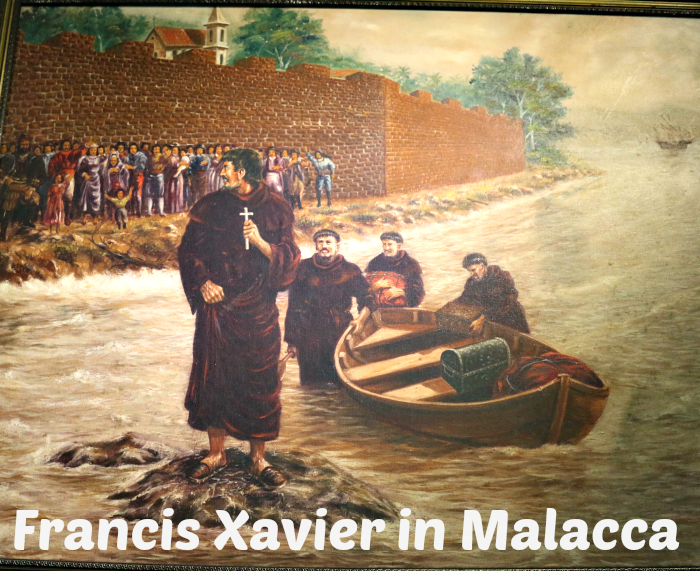 The accompanying caption reads as follows:

In 1545 a priest named Francis Xavier arrived in Melaka, intending to spread Catholicism not just Melaka [sic], but also throughout the region. In Melaka he attracted a lot of attention and frequently visited other parts of Southeast Asia and South China Sea.

In 1553*, he wanted to visit China to continue his work there, and made an official request to the Portuguese governor, Dom Alvaro, for a ship. However, the governor was uncooperative. In the end, Francis Xavier was allowed to board the ship, Santa Cruz, but in an unofficial capacity. Because of low tide, he had to wade through the mud to reach the boat that would take him to the ship. On reaching the bedrock before boarding the boat, he cursed the Governor. The Portuguese Governor later died of leprosy.

* We know this date is incorrect because Francis Xavier died on 3 Dec 1552.

Did Xavier really curse the Governor? If true, his behaviour would seem unbecoming for somebody who would soon be declared a saint. Xaverian schools teach how pupils should bear wrongs patiently and forgive offences willingly but it seems he did not show much patience or forgiveness on this occasion. Let’s find out a bit more about this famous saint, the most zealous and successful of all missionaries ever sent to the East. 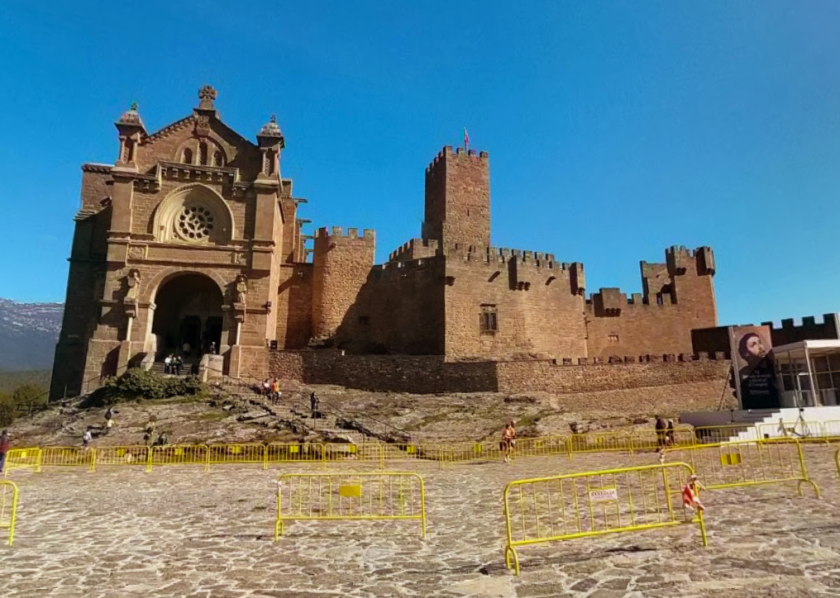 Francisco De Xavier was born in this castle in Navarre, Spain on 7 April 1506 to a wealthy and aristocratic family.

In 1525 he went to Collège Sainte-Barbe, University of Paris, as a student where he spent the next eleven years. He seemed set on a life in academia until he fell under the influence of Ignatius Loyola who persuaded him on a spiritual life. Together with five other students they formed the Society of Jesus (Jesuits) and took vows of poverty, chastity and obedience to the Pope. 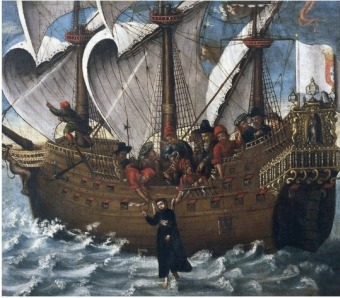 In 1541, on his 35th birthday, he sailed from Lisbon and arrived in Goa in May 1542, thus beginning his short but spectacularly successful missionary career in Asia. Ten and a half years later he would be dead but in that short time he was said to have converted 700,000 people to Christianity, 100,000 with his own hand, in India, Ceylon, the East Indies, China and Japan.

How did he achieve such stellar results? Mostly through hard work, good example, persuasion skills and other standard missionary techniques. And partly through performance of various ‘miracles’ with which he is credited such as the sick being healed, dead raised to life, lepers cured and pestilence ceased.

Modern readers cannot help being sceptical about claims of the dead being brought back to life. If we saw these ‘miracles’ being performed today on TV we would say it is David Blaine-style illusion or a put-up job with accomplices in the audience. Xavier was working among simple people, often illiterate and deeply superstitious: they would have been less suspicious than us.

He was also said to have the gift of tongues, in that men of different languages understood him at the same time, each in their own dialect. This also seems unlikely. We know he spoke a number of languages: Basque, Spanish, French, Latin, Greek but we also know he struggled to make himself understood in Tamil (not surprising – a very difficult language for non-Indians).

Congee and Egg Whites or a Miracle? 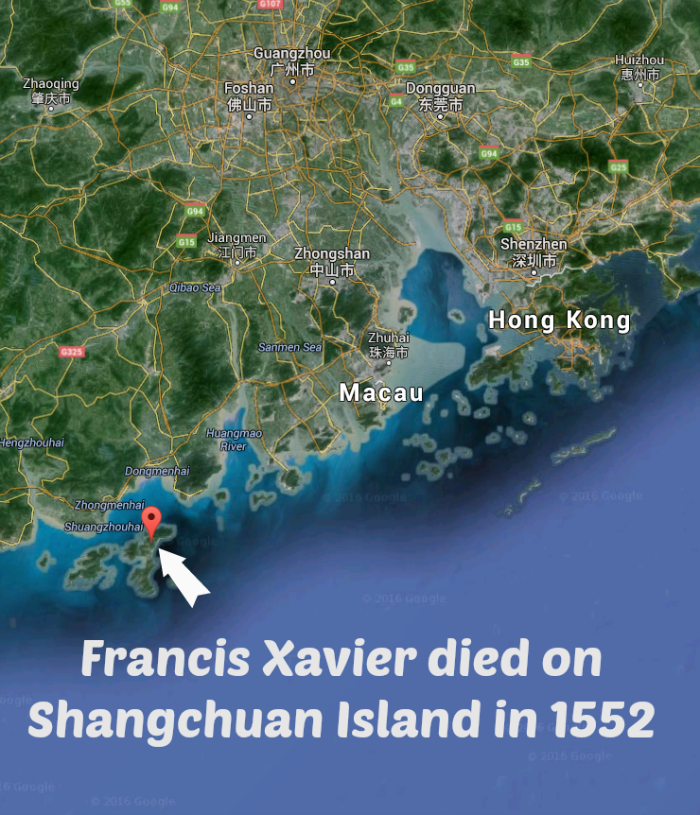 Then there is the enormous fuss made about his body after his death and the fact that it remained free from normal decomposition for an exceptionally long period, which again was seen as miraculous.

When he died on Shangchuan island, China on 3 December 1552 he was temporarily buried pending arrival of a vessel to transport his remains back to Malacca. His body was covered with quicklime with the intention of hastening decomposition so that the bones could easily be transported. When the body was disinterred two months later it was found, to the astonishment of all,  to be as fresh as the day it was buried.

Thereafter the body was taken by ship to Malacca arriving in March 1553. The body was taken to the Church of Our Lady of Mount where it was buried without a coffin in a grave too small, causing the neck to be bent and broken. Probably the Governor of Malacca, Dom Alvaro, was responsible for this rough treatment, still resentful of his clash with Xavier. When the body was exhumed once again in August 1553, the body was still in fresh condition.

The body was subsequently transported to Goa, India where his shrivelled remains are still on display at the Basilica of Bom Jesus.

Is there a more scientific explanation for how the body could have remained free from corruption for such a long time? There are conflicting reports on the qualities of lime. Some say lime accelerates the process of decomposition while others say that lime is highly effective in preventing decay and protecting the body. Furthermore, the lime would have been obtained locally on Shangchuan Island and probably be of the sort used for construction. In China, organic materials such as congee (sticky rice soup) and egg whites were often added to increase the strength of lime mortar. Might this have had the effect of preserving Francis Xavier’s corpse?

Such ideas probably do not carry much weight with believers in miracles and tens of thousands of devotees continue to flock to churches holding relics of St. Francis Xavier in the hope that these body fragments might somehow perform wonders.

If you want to Rest In Peace, better not become a saint 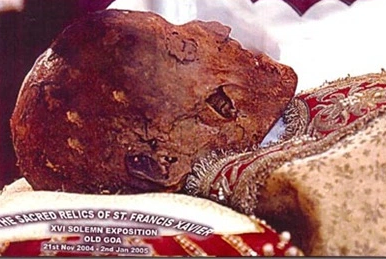 St. Francis’ poor body has been poked and probed, sliced and diced,  and divided up into multiple parts and distributed to various places around the world. 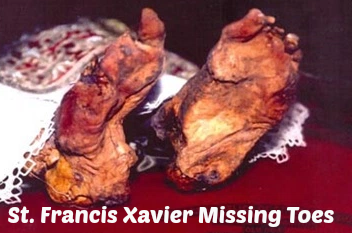 A chunk of flesh cut off centuries ago is now kept in a reliquary in the basilica and a toe is preserved in another reliquary and kept for public veneration every Friday and Sunday. This toe had been bitten off by a Portuguese lady while kissing the corpse’s feet in 1554 in her pious eagerness to possess some relic of St. Francis.

Two other bones are held by other churches in Goa. 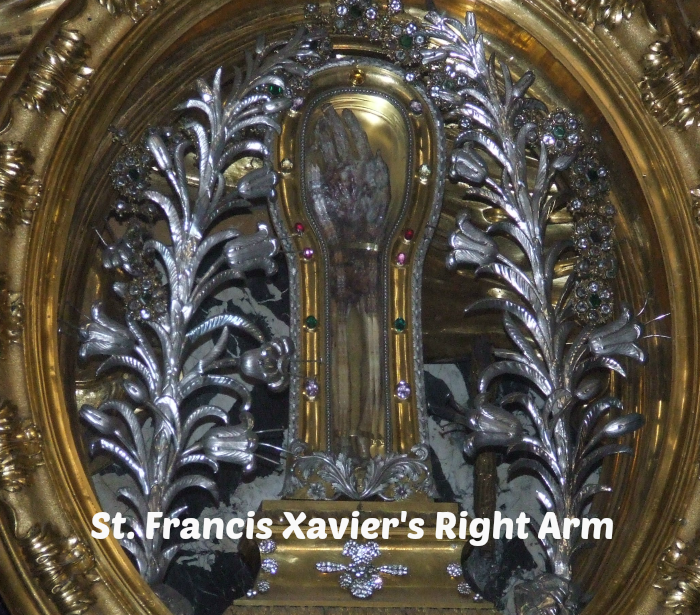 In 1614 the entire right arm was detached. The hand and forearm were sent to Rome at the request of the Pope while the upper arm was divided into two; part went to the Jesuit college in Cochin and part to their college in Malacca. The story goes that in Rome the arm was placed on a table, given a heap of papers with a pen, and told to sign its name to prove its sainthood. The arm, it is recorded, lifted itself and wrote the name Francis Xavier, with the signature passing through all the sheets of paper and onto the table. (Not very plausible – another fable?). The right arm is now on display at the main Jesuit church in Rome, Il Gesu.

Xavier’s humerus is kept in a silver reliquary at St Joseph’s Macau , having previously been kept at the Chapel of St. Francis Xavier on Coloane, Macau.

All the internal organs of the chest and abdomen were removed and distributed among various countries.

Was the sainthood deserved?

Xavier’s outburst at Malacca was rather un-saintly, but then nobody is perfect.

As a missionary he was outstandingly successful and for that alone he deserved the highest honour the Catholic church was able to bestow, i.e. a sainthood.

He gave up a life of comfort and wealth in order to work with the poor, sick and helpless. He devoted his life to his mission. What could be more saintly than that? 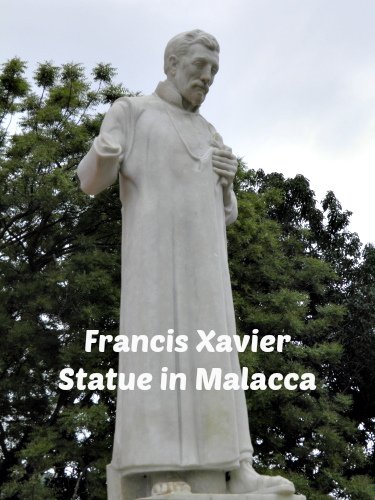 While in Lisbon recently I wanted to visit the Museu do Oriente, a museum dedicated to the Portuguese presence in Asia. Portugal’s principal possessions in Asia comprised Goa, Malacca, East Timor and Macau together with a trading post in Nagasaki, all places which are relevant to the theme of this blog. 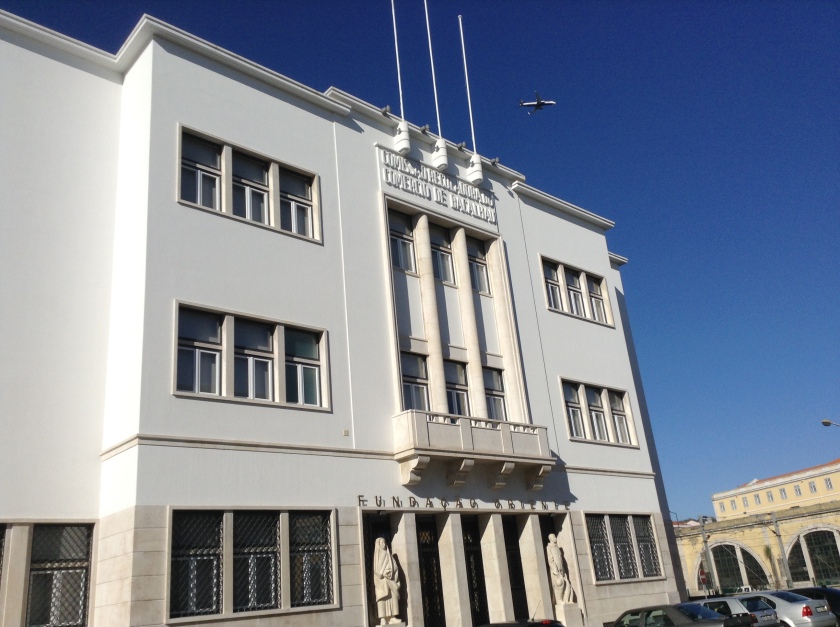 The museum, together with its parent organisation the Fundação Oriente, is housed in a former dock-side warehouse which used to belong to the Comissão Reguladora do Comércio de Bacalhau (commission for regulating the trade of cod).

The museum’s permanent exhibitions cover two floors, the lower floor containing the items relating to the Portuguese colonial period in Asia and the upper floor housing the Kwok On Collection of over 13,000 pieces connected with performing arts in Asia.

The Macau section covers the most floorspace which is not surprising since Portugal controlled the territory for nearly 450 years. 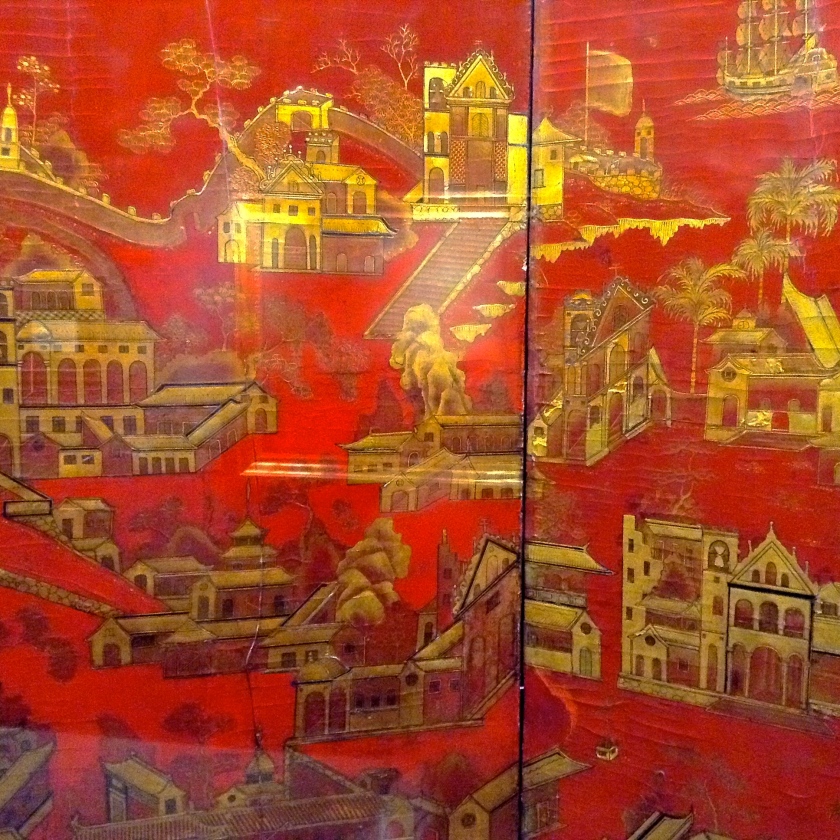 This handsome lacquer screen portrays some of the major landmarks of Macau including St. Paul’s Church (of which only the facade still remains), Mount Fortress and A-Ma Temple. 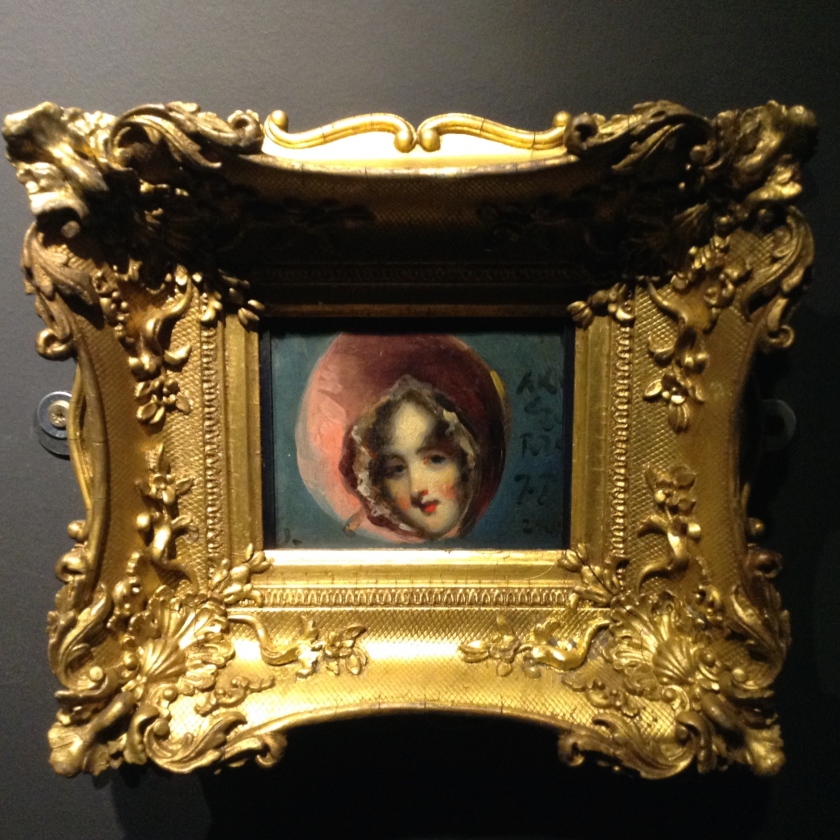 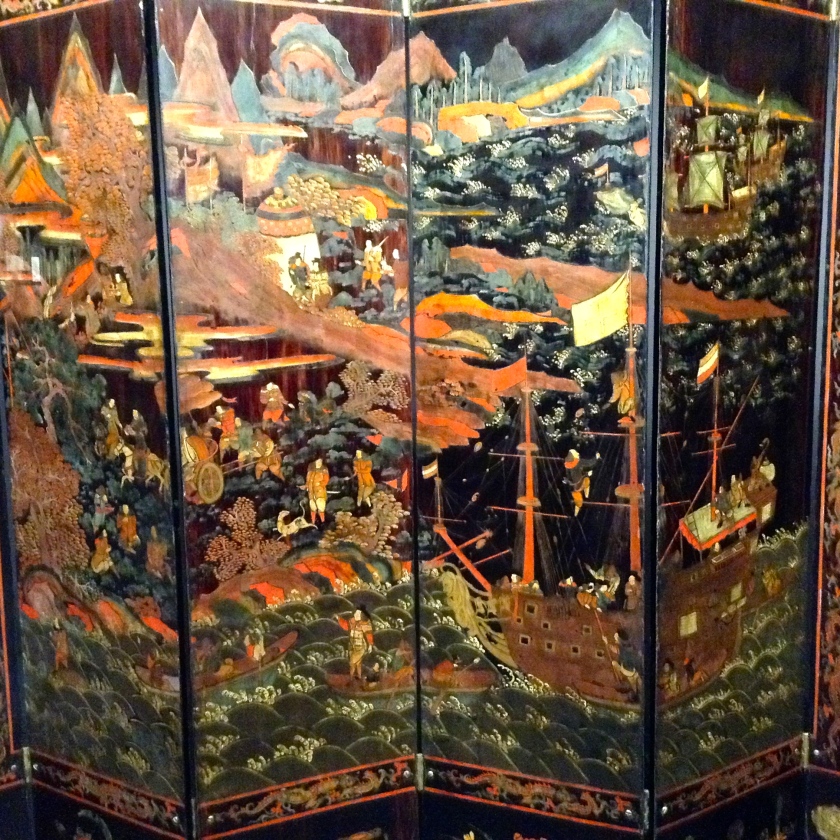 Another lacquer screen from the 17th Century shows a Portuguese trading carrack in the process of disembarking its cargo in China to trade with the Chinese. 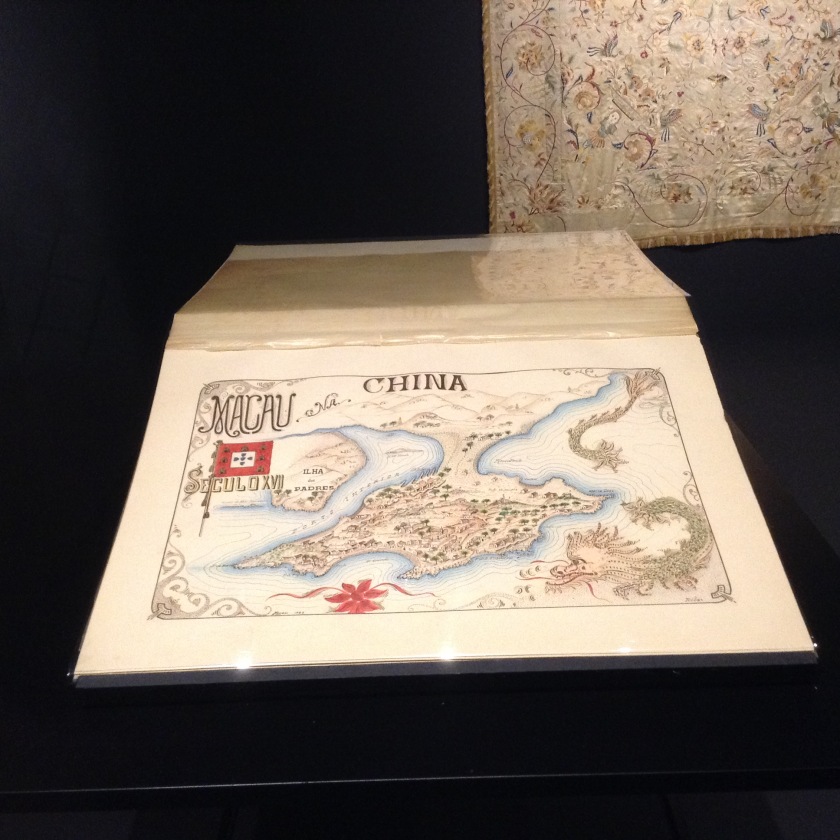 One of the world’s thinnest books must be this atlas of Portuguese possessions in southern China by Albino Ribas da Silva (1868-1934). It consists of just 8 pages, all of Macau. 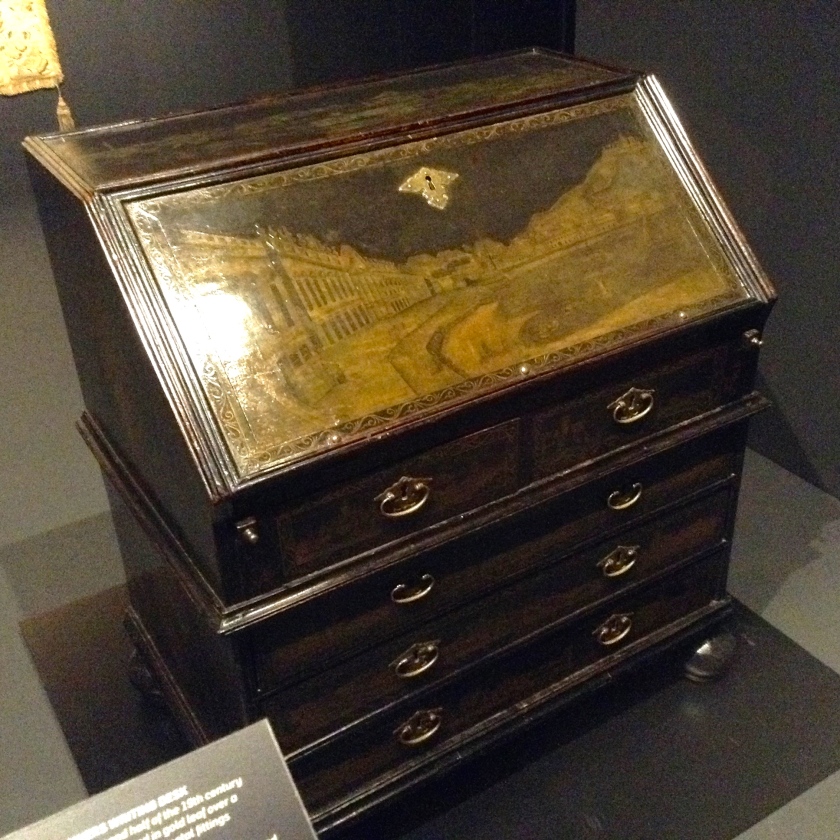 This European style bureau or writing desk has been decorated with a black and gold lacquer illustration of the Praia Grande, Macau’s seafront promenade. 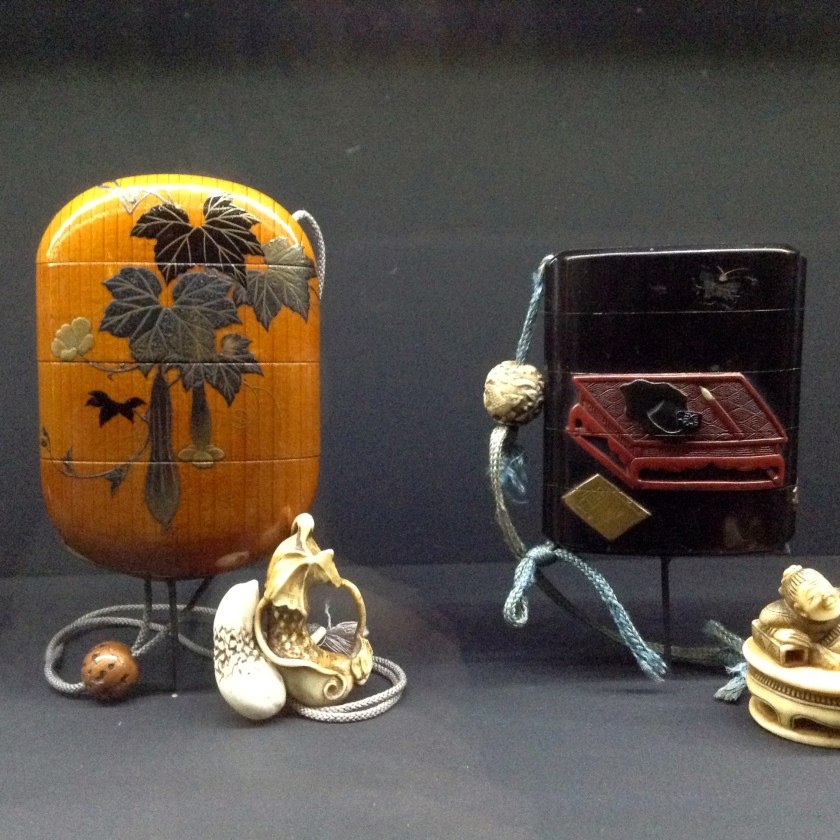 Over in the Japanese section is a fine collection of inro, beautifully crafted wooden boxes used for carrying small items (since Japanese men did not have pockets in their traditional robes). 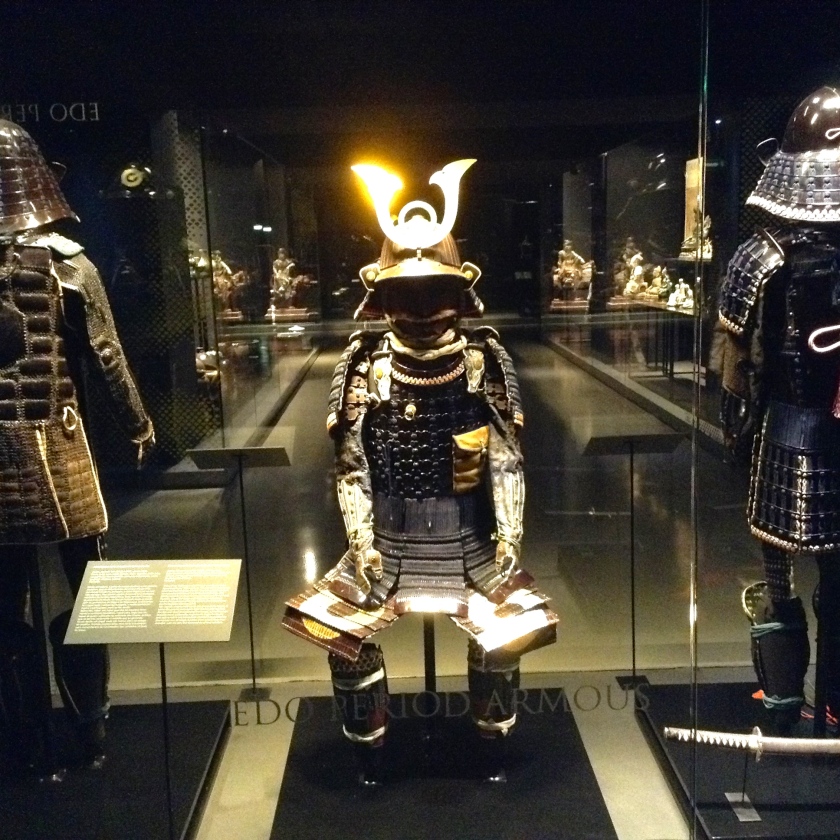 Portuguese traders and missionaries were tolerated in Nagasaki for 50 years or so until Tokugawa Ieyasu took power and expelled the foreigners in 1614. Portugal is credited with introducing tempura, firearms and Christianity to Japan among other things. 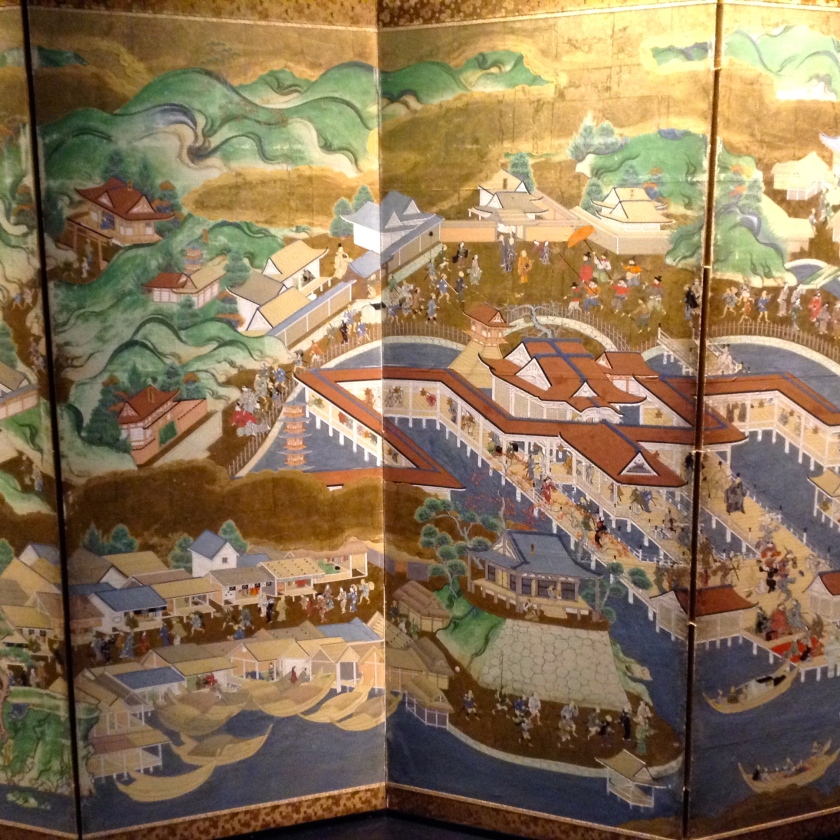 This Japanese screen shows a Portuguese delegation with its leader sheltered by the yellow umbrella. 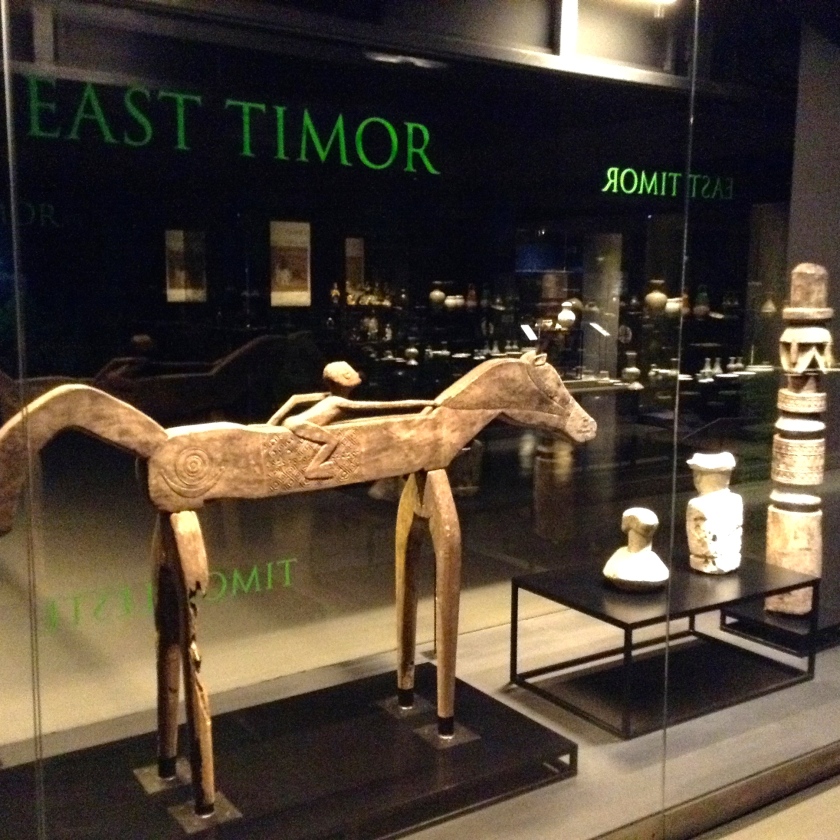 East Timor was a Portuguese colony until 1975 when it became part of Indonesia. It broke away from Indonesia and gained independence in 2002. Timur is Malay for east so the country’s name means east-east which is a bit odd, like Gili Islands in Lombok which means island-islands. According to the museum, Timur was so-named because it was the most easterly island in the Sunda archipelago searched by Malays, Indians, Arabs and Chinese in their search for white sandalwood which grew in abundance in the area. 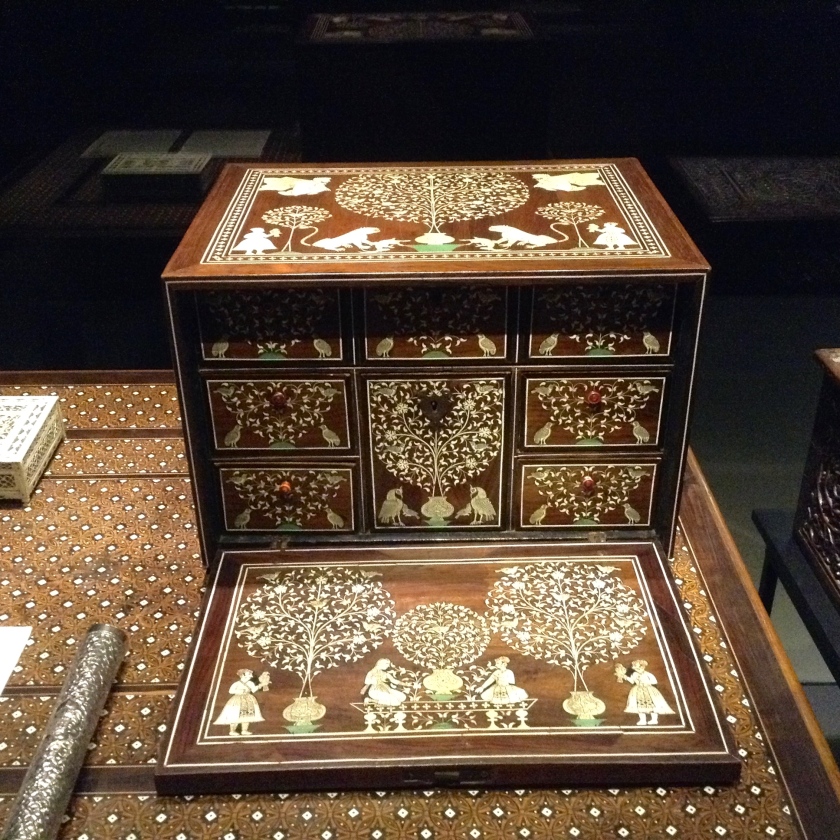 The Indian section contains some attractive pieces such as this inlaid cabinet and desk. 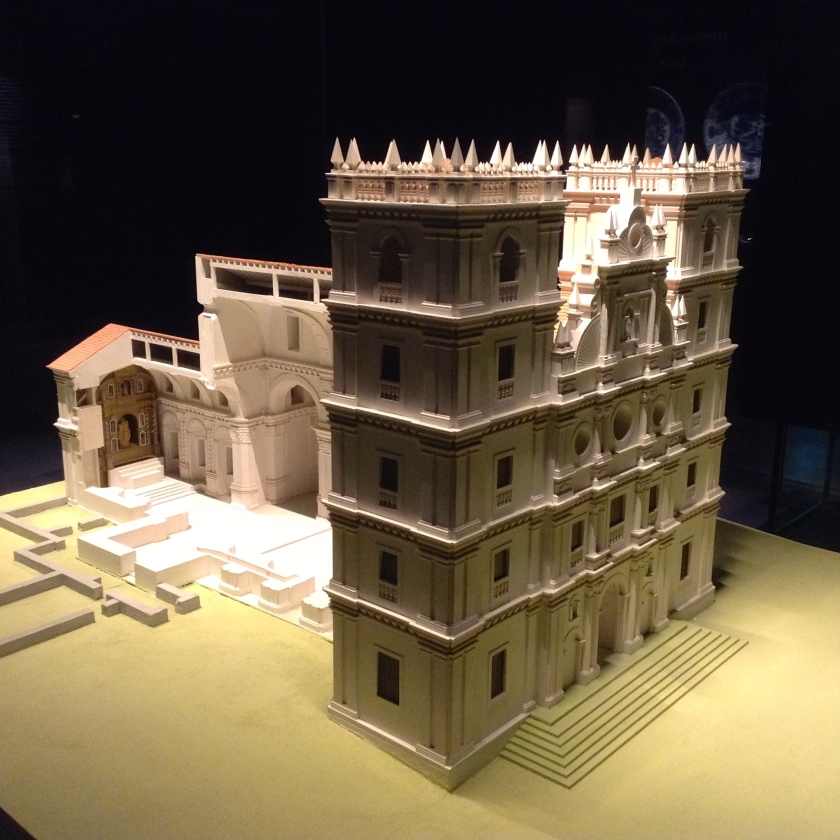 This is a scale model of the Church of Santana in Talaulim, Goa. The church, which still stands, was built between 1681 and 1695 and marks a turning point in Luso-Indian architecture. 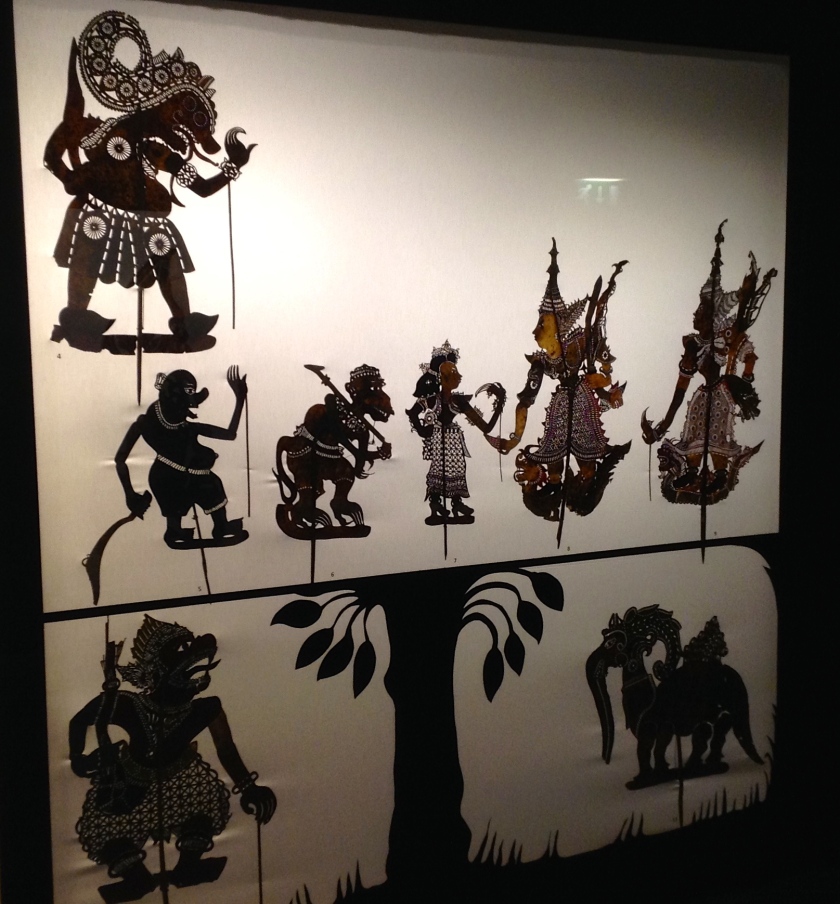 The town of Malacca hardly gets a mention in the museum which is disappointing. However Malaysia does feature in the performing arts section with Wayang Siam shadow theatre puppets on display. Wayang Siam exists in Kelantan and is heavily influenced by Thai and Javanese shadow theatre traditions. 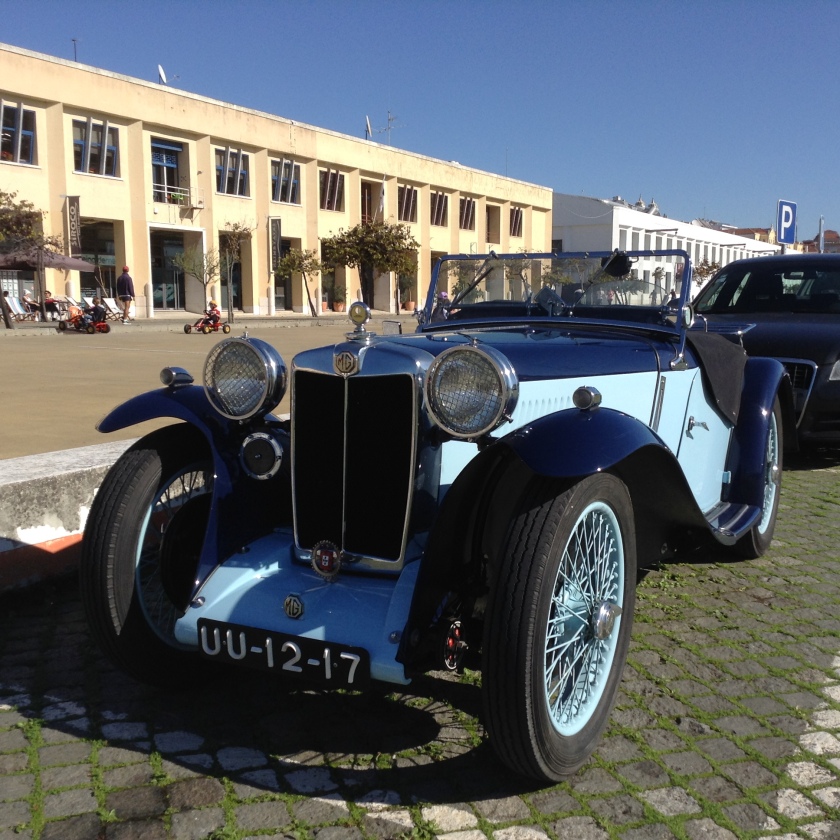 This lovely MG car is not part of the museum but was parked outside. If you want to find out more about the museum you can visit their official website.