One of Kuala Kangsar’s more famous former residents was the novelist Anthony Burgess (1917-1993), who was employed as an English teacher at the prestigious Malay College from 1954 to 1956.  His first published novel, Time for a Tiger (1956), drew on his experiences at Kuala Kangsar, which in the book goes under the fictitious name of Kuala Hantu.

Since I was visiting Kuala Kangsar I thought it would be fun to try to find some of the places which would have been familiar to Burgess and the characters in his novel.

One of the main characters in Time for a Tiger is Victor Crabbe, who shared many of Burgess’ own characteristics and, like Burgess, was in the Colonial Education Service and a resident master at Malay College (or Mansor School as it is called in the novel).

Burgess and his wife were accommodated in a second floor flat at King’s Pavilion which was once the grand residence of Sir Hugh Low, the British Adviser to the State of Perak, but by 1954 served as the prep school to Malay College. During the War, the Japanese had used the building as a torture and interrogation centre and Burgess’ bathroom was still stained with dried blood which was impossible to remove. Burgess houseboy and others claimed the house was haunted. The grounds were infested with snakes while scorpions used to get into the shoes and beds of the students under Burgess’ care.

Burgess was not the most faithful of husbands. He had an affair while at KualaKangsar with a pretty Malay divorcée called Rahimah who worked as a waitress in a Chinese coffee shop. In the novel, Crabbe too had a mistress, a dance hostess with the same name. Kuala Kangsar today does not seem the sort of town to have hostess bars but I could be wrong.

My favourite character in the book is Nabby Adams, a six-foot eight policeman from Northamptonshire who was in charge of the police transport pool, though he was seldom sober enough to drive. He was an alcoholic who liked to start off the day with three large bottles of Tiger (or Anchor, or Carlsberg) though he was known to polish off a full bottle of gin before breakfast (not that he ever ate breakfast). Nabby’s unquenchable thirst caused him to rack up unmanageable debts at all the dingy Chinese-owned drinking kedai-kedai that he liked to frequent.

One place that still exists that Burgess and Nabby Adams would certainly recognise is the Idris Club (in the book it is thinly disguised as Iblis Club). This was the social hub for the Europeans living in Kuala Kangsar and still today has the elite of the area among its members, though now virtually all Malaysians of course.

For Nabby Adams  this was the drinking hole of last resort because had to keep his bar tab within reason and also he would not like to get drunk in front of his fellow Brits in case word got back to his bosses. But still, if somebody else was paying, Nabby would have a Tiger or six here.

While doing my research for this article I found that a gentleman called Geoffrey Grigson has travelled extensively in Burgess’ footsteps and has produced a series of entertaining You Tube videos called In Search of Anthony Burgess. If you are a Burgess fan I recommend you take a look.

While in Kuala Kangsar recently I took the opportunity to peek inside Ubudiah Mosque since it was early in the morning and no prayers were going on.

This mosque is thought by many to be the most beautiful in Malaysia, even though it was designed by a British non-Muslim. The government architect was Arthur Benison Hubback who was also responsible for KL railway station,  Ipoh railway station and many other famous Malaysian landmarks. The architectural style is said to be Mogul-Gothic, drawing on elements found in Mogul mosques around India. It was built during 1913-1917.

The main prayer hall is octagonal and surprisingly small, about 20 yards across. In common with all mosques, there is no furniture inside other than a carved wooden screen, segregating the women’s section, and the minbar (pulpit). The space is air-conditioned.

The recessed mihrab (the niche designating kiblah, or direction of prayer) is lined with naturally patterned Italian red marble.

There is a fine wall-to-wall Persian carpet and a chandelier hanging from the intricately decorated ceiling.

The mosque’s guardians found that it was too small for modern day purposes so new verandahs were added in 1993 to accommodate additional worshippers.

Next door to Ubudiah Mosque is the Royal Mausoleum where Perak’s Sultans and family members going back to the 1800’s are buried. It is built in similar style to the mosque.

Non-Muslims are welcome to visit the mosque provided they are appropriately attired and visit outside of prayer times. 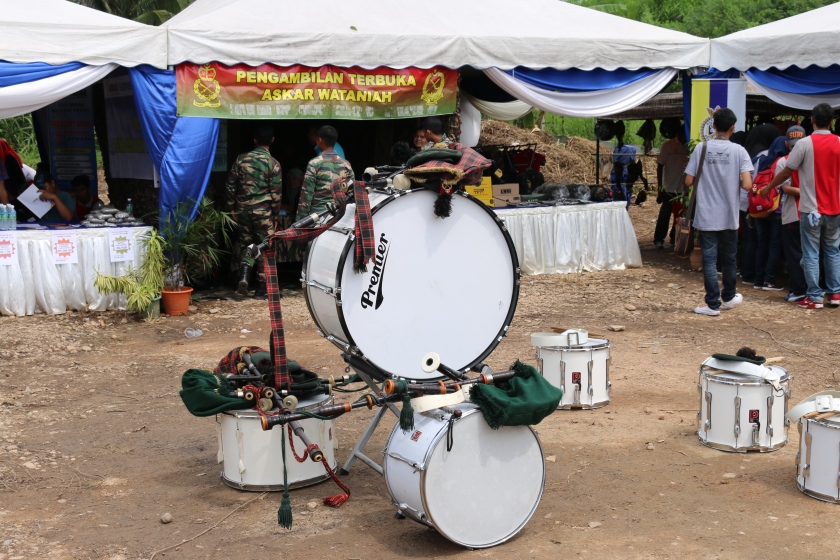 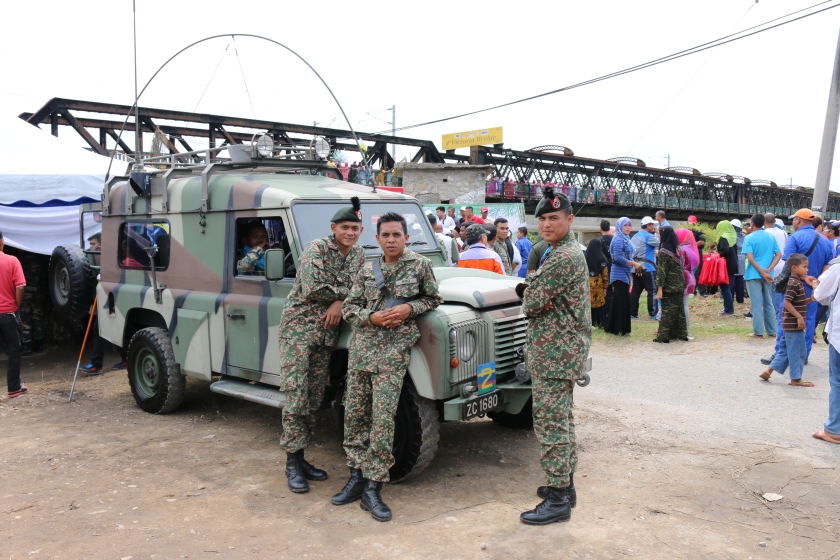 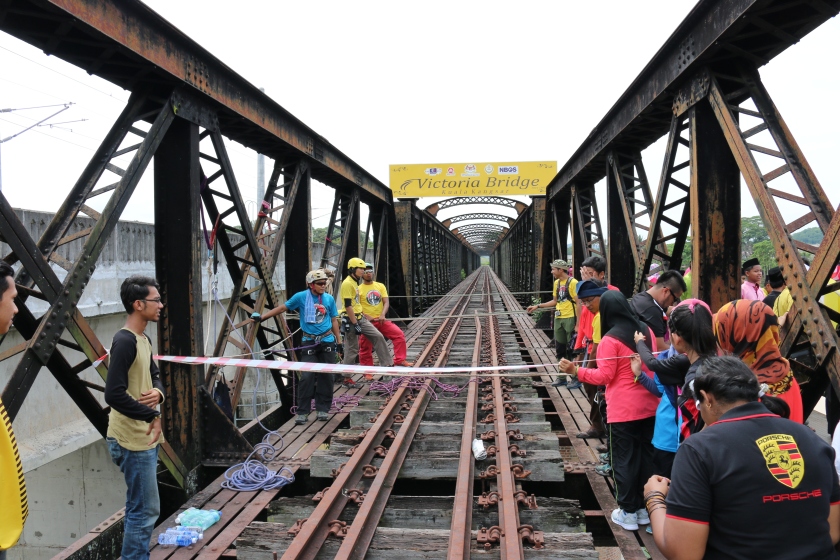 In the royal town of Kuala Kangsar, on a rise overlooking the mighty Perak River, lies a small Christian cemetery. It contains 16 British military graves dating from the Perak War of 1875-77 together with some civilian graves, including more recent ones from the town’s tiny Anglican population (mostly Tamils). As a war cemetery, it comes under the care of the Commonwealth War Graves Commission (CWGC) and on their website it is shown as Bukit Chandran Cemetery (should be spelt Chandan).

The Perak War was one of those small wars that Britain was rather good at. It followed the murder of James Wheeler Woodford Birch who had recently taken up the position of Resident as advisor to the Sultan of Perak. Britain had discovered during its time running India that the practice of appointing Residents to assume all the real power, while leaving nominal control in the hands of the local chief, was a very effective way of acquiring an empire ‘on the cheap’. But poor Birch rubbed the locals up the wrong way and paid for it with his life. You can read more about his assassination on my Malaysia Traveller website.

Britain could not allow its officials to be murdered so a military expedition force was rapidly put together to punish the perpetrators and stamp out any smouldering rebellion in its newest protectorate. The force comprised sepoys from India, Gurkhas, some Sikh police and a Naval Brigade. The Malays put up a fight but eventually were overwhelmed and the assassins, including Maharaja Lela, were captured and hanged. The Sultan was exiled to Seychelles and replaced by a more amenable relative.

Casualties on both sides were light and, from the British point of view, were a small price to pay for securing Malaya as one of Britain’s most remunerative colonies. Of course, for these poor 16 individuals who perished it was not a small price at all, to say nothing of the many sepoys killed in action who have no known grave (unlike in later wars where Indian soldiers received the same burial honours as other British war dead).

It is a credit to the CWGC that this far-off and largely forgotten cemetery continues to be beautifully maintained 140 years after their burial, even though most of the descendants of the deceased are probably not even aware of their existence. 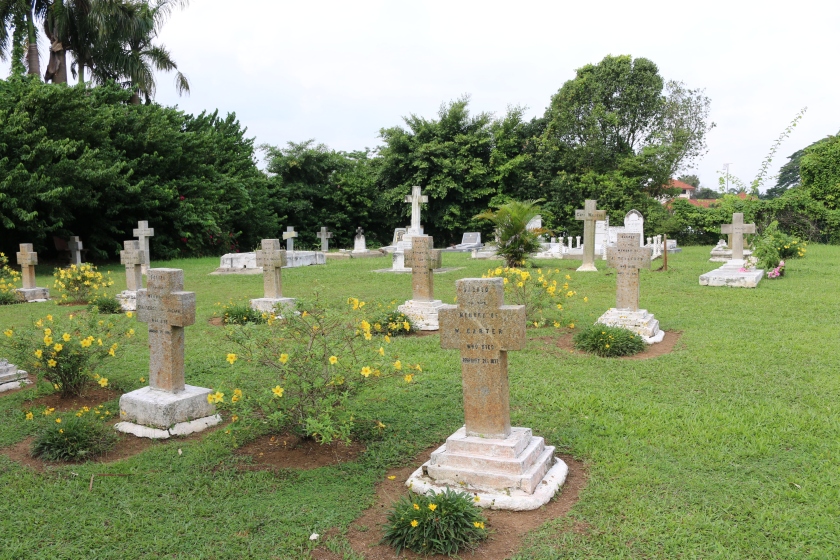 Being a royal town, home to the Sultan of Perak, it contains three palaces, two of which have been converted to museums. 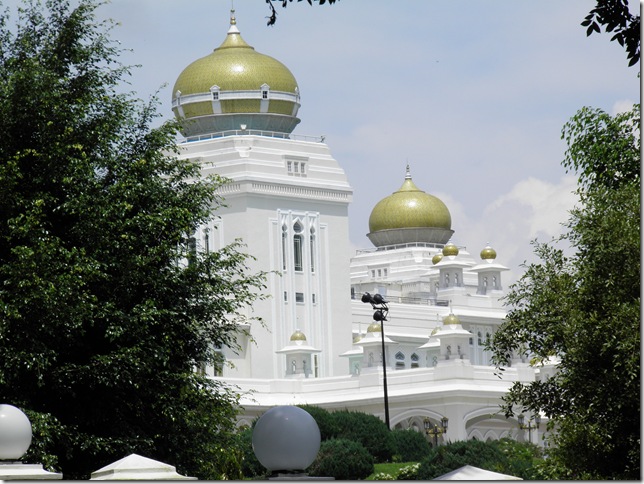 Istana Iskandariah is the more modern one and is the actual Royal Palace. 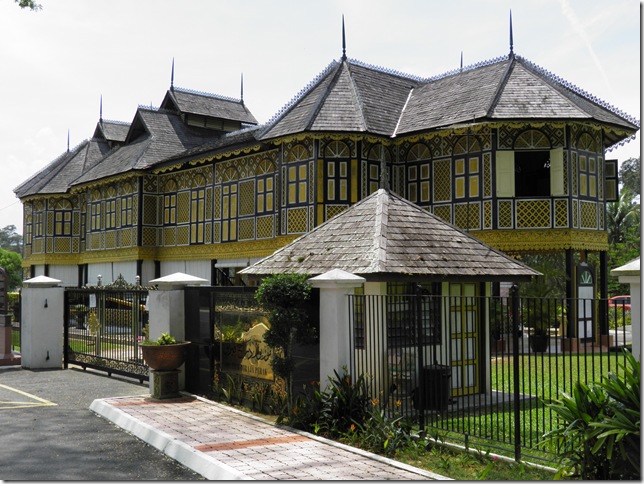 This quaint old palace, Istana Kenangan now serves as the Perak Royal Museum but on my visit today was unfortunately closed for upgrading works. 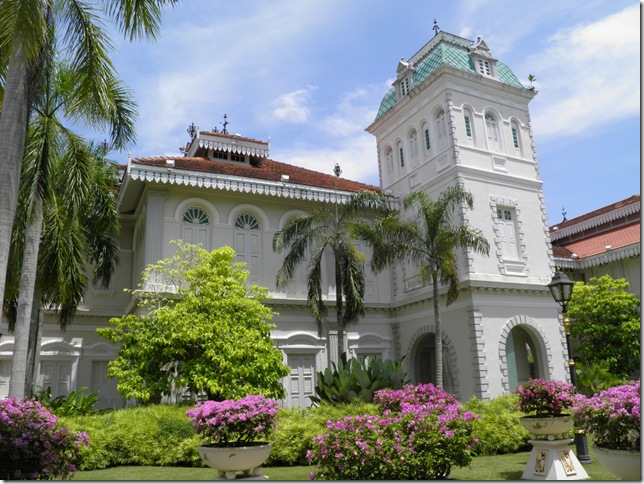 The third palace, Istana Ulu, is now the Galeri Sultan Azlan Shah. It is tastefully laid out and displays personal and official possessions of the Sultan and his wife including crown jewels, costumes, photos, medals, gifts, kris, and mementoes  from his educational, working and sporting life. I liked his collection of Mont Blanc pens. 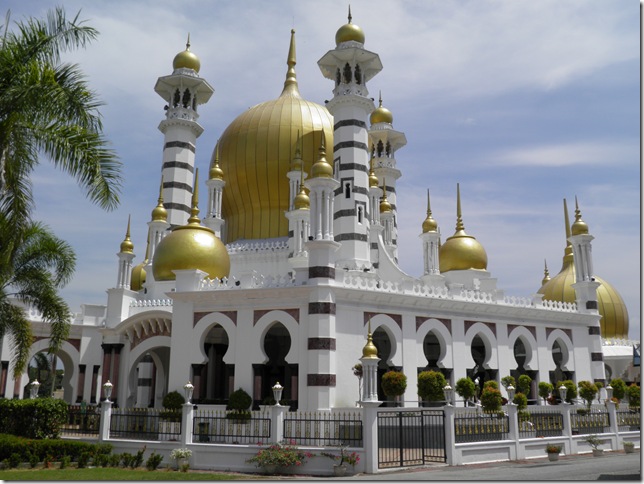 Just down the road is the Ubudiah Mosque, one of Malaysia’s most famous and attractive mosques. Construction started in 1913 but was delayed when two elephants had a fight and completely wrecked the marble which had been imported from Italy for the project. 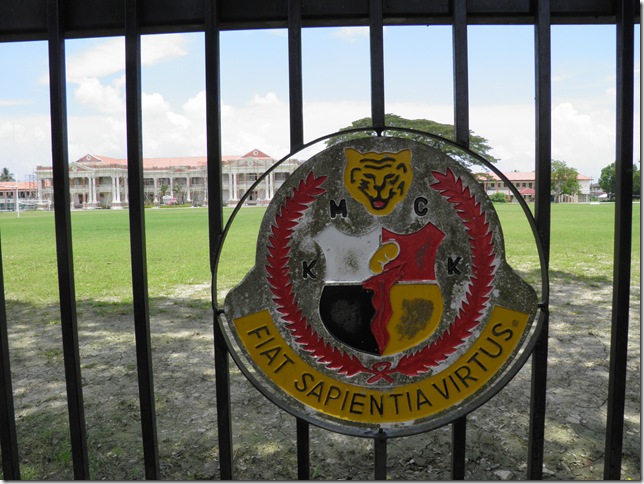 Kuala Kangsar is also home to the Malay College Kuala Kangsar, an all-boys and all-Malay boarding school founded in 1905 – Malaysia’s equivalent of Eton. The Latin motto means ‘Manliness Through Wisdom’. 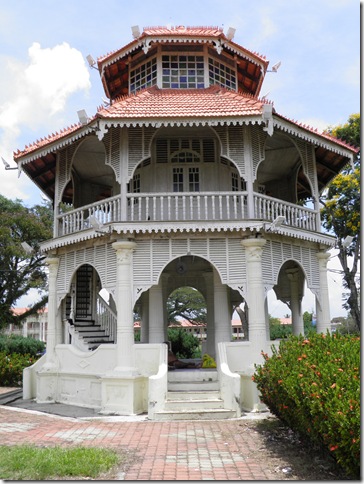 Opposite is the Pavilion Square Tower, built in 1930 for the Royals and VIPs to watch polo matches.  The structure is now unsafe to enter. 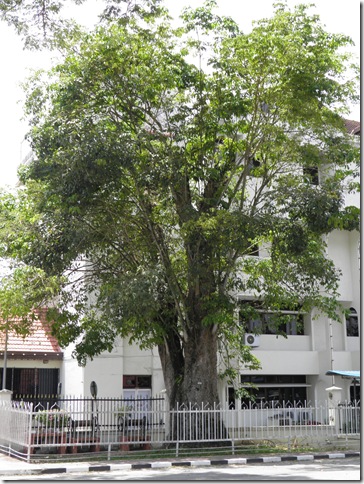 In the same street is what is said to be the oldest rubber tree in Malaysia, having been one of the original nine seedlings brought over to Malaya in 1877. 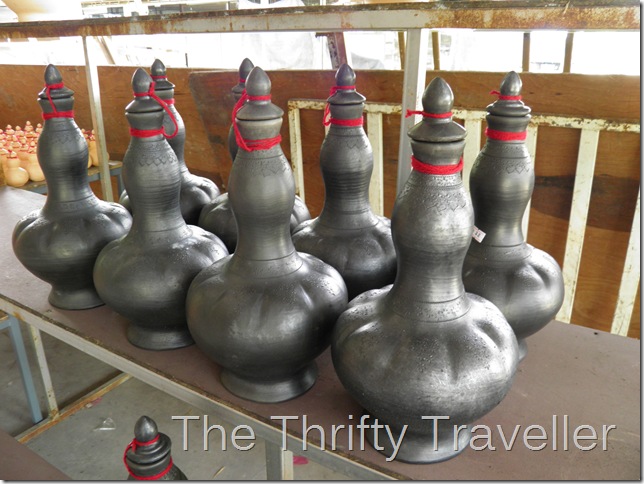 Kuala Kangsar is known for its gourd shaped earthenware jars called labu sayong. They are used to keep water cool. Some say water stored in these jars acquires healing powers. I bought one to take home – RM12.