Anyone who is familiar with the Arabian Gulf knows that it is a pretty conservative part of the world. Imported newspapers or magazines showing any form of nudity, plunging necklines or bare midriffs are routinely censored either by ripping out the offending photos or defacing them with a thick black felt-tip pen.

How could it be then that Ajman, now part of the UAE but at that a stand-alone emirate, could issue stamps like these in the late 1960’s? 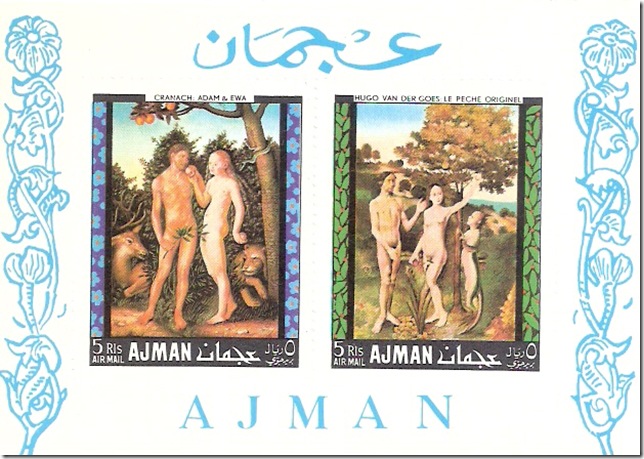 Ajman was a fairly impoverished place at the time. With only 300 square miles of territory and a population of just 5,000 its only resource was a creek where fishing boats and sailing dhows could take shelter and trade.  So when a canny Lebanese businessman approached the Ruler with a scheme to make money out of postage stamps it probably seemed a good idea. In return for a fee, the Lebanese man was given the rights to print and sell stamps bearing the name Ajman (he also secured similar rights from other Gulf Sheikhdoms). Stamps were produced in their millions and sold as fillers for thematic collectors with designs like butterflies, fish, birds, Olympics, space exploration, cars, trains and paintings like these nudes. Serious stamp collectors looked down their noses at these issues as they were never intended to be used for post in Ajman.

I expect the Gulf rulers were not happy when they found out about these issues. Luckily for them these stamp contracts were terminated when Ajman joined with their neighbouring  emirates to form the United Arab Emirates on 2nd December 1971.

The UAE has had a more responsible policy when it comes to postage stamps. issuing a dozen or less sets a year in limited numbers which makes them more sought after by collectors. There have been one or two anomalies though and at the risk of boring my readers I will mention one of them. 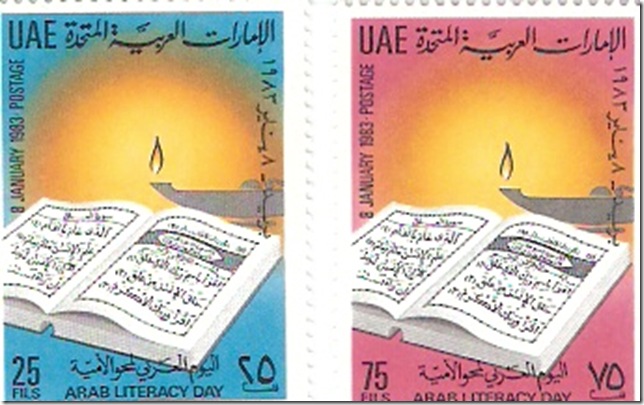 These stamps depicting the Koran were issued on 8 January 1983 but withdrawn from circulation 5 days later when it was pointed out that cancelling these stamps with a postmark chop (and licking them on the reverse) might be seen as a disrespectful way of treating an image of the Koran. As they were withdrawn after only 5 days there are not many around. If you do own these stamps they are catalogued at GBP50 used or GBP26 mint each (2005 prices).

One thought on “The Ajman Nudes”