For many decades, Tong Nam Piles Specialist brought relief to haemorrhoids sufferers from its humble premises at No. 47 Jalan Dang Wangi (once known as Campbell Street). 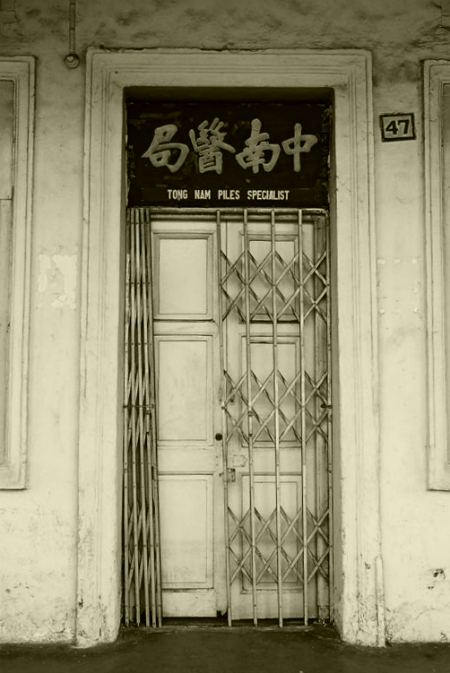 Faded testimonials in the shop window attest to the skill of practitioner who used to heal his patients by traditional methods without resorting to surgery. Here is one such letter, dated 12th June 1940, sent by Mr. O L Borneman who appears to have been a senior manager with a trading firm in KL called Macgregors Ltd. (still operating in Malaysia under the name of Caldbeck Macgregor) 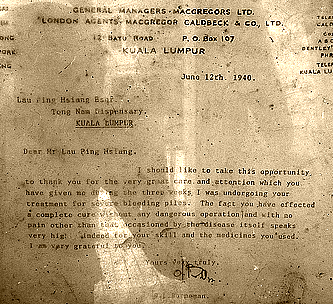 I should like to take this opportunity to thank you for the very great care and attention which you have given me during the three weeks I was undergoing your treatment for severe bleeding piles. The fact you have effected a complete cure without any dangerous operation and with no pain other than that occasioned by the disease itself speaks very highly indeed for your skill and the medicines you used. I am very grateful to you.

Could Mr Borneman have ever imagined that his privy letter would be on public display for the next 75 years, even surviving the Japanese occupation?

Without wishing to go into too much detail, haemorrhoids are a very comment complaint. Some say they are more prevalent in western countries and attribute this to the universal usage of the sitting-type toilet rather than the squatting hole-in-the-floor toilets found in Asia. This however may be a myth. One study claims that in India (where squatting is the norm) 75% of the population is estimated to have piles. Spicy food, and chilis in particular, could be a factor. If this statistic is true, then, as India’s growing population becomes better off and more likely to spend money on healthcare, piles treatments like ointment seem like a sure investment and a good place to stick your money (if you excuse the crude pun).

While trying to research haemorrhoids statistics by country I came across this snippet. According to the 1906 Jewish Encyclopedia, haemorrhoids were more common to Jews than any other people at that time. Among the Ḥasidim in Galicia and Poland, a Jew without haemorrhoids was  considered a curiosity.  They attributed this condition to the long hours spent sitting on hard benches while studying the Talmud. Constipation (due to diet?) also played a role.

Returning to Tong Nam Piles Specialist, Mr. Lau presumably retired long ago with his piles of cash and, after a long time with shutters closed, the shop has reopened as a barber. Perhaps you can get your hair and piles done at the same time!